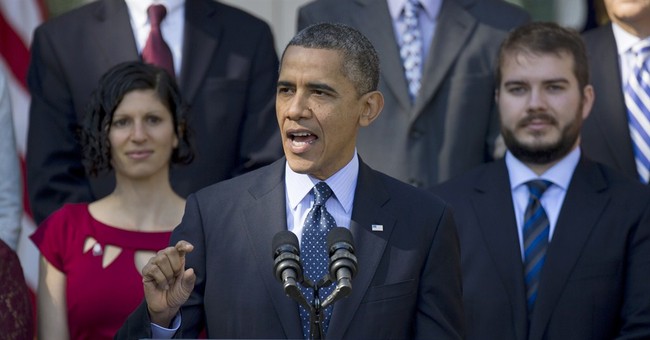 If, while channel surfing mid morning, you stumble upon someone flanked by happy “customers,” hawking a “good product,” and reciting a 1-800 number, chances are it’s an infomercial for the latest magical kitchen blender.

It’s not usually a presidential address from the Rose Garden.

But that’s what President Obama was reduced to on Monday. Three weeks after healthcare.gov went live, the White House is in damage control. Because Health and Human Services bureaucrats and government contractors couldn’t figure out how to put together a functioning website over a three-year period, the Commander-in-Chief had to offer Americans an alternate way to buy the insurance he’s forcing them to buy: a 1-800 number.

Perhaps unaware of just how bad the website is, the president insisted everything was still working, save for a few small glitches. To prove his point, he brought thirteen “success stories,” Americans who had already benefited, he claimed, from ObamaCare. The administration refuses to release the (presumably low) number of people who have enrolled online, so they’re relying on a few anecdotes to defend the entire system.

It turns out only three of the thirteen had successfully navigated ObamaCare’s broken exchange, and one of them had done so just the night before.

It’s no wonder at this point that people across the political spectrum have called healthcare.gov disastrous. What is amazing, though, is that the Obama administration has done nothing to hold anyone accountable. That would never happen in the private sector. When Apple Maps was met with frustration and ridicule, Apple quickly sent the person responsible packing.

But has the White House expressed even an ounce of disappointment in Health and Human Services Secretary Kathleen Sebelius? No. The president still expresses his confidence in her, and she was on hand for his Rose Garden infomercial Monday.

The broken healthcare.gov cost taxpayers hundreds of millions of dollars. There’s no telling how much more money will be poured into trying to fix it. Shouldn’t someone take responsibility for this gross mismanagement of time and resources?

The website is just a part of ObamaCare, but it does illustrate how ill-equipped the federal government is to manage the nation’s health care system and to meet the demands of the 21st century. It shows just how poorly-crafted the law was and how terribly it has been implemented.

It proves that Americans can’t depend on distant government bureaucrats to look out for the nation’s best interests. And why would they? When something goes wrong, no one’s held accountable.