Rebekah Koffler
|
Posted: Jan 15, 2022 12:01 AM
Share   Tweet
The opinions expressed by columnists are their own and do not necessarily represent the views of Townhall.com. 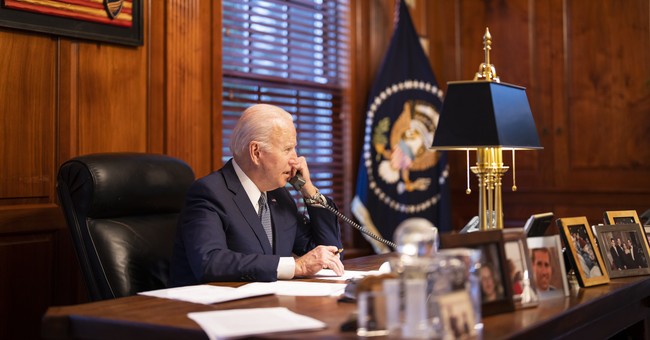 As the predictably useless U.S.-Russia security talks in Europe are wrapping up this week, Putin is launching another huge live fire drill on the border of Ukraine. In addition to the 100,000 combat-ready troops that were pre-positioned in the area,  Russia deployed  additional 3,000 troops, 300 tanks, infantry fighting vehicles, ground attack fighter jets, transport and attack helicopters, and other weaponry. The Russian strongman’s answer to President Biden’s naïve pleas to “de-escalate” the crisis in Ukraine is to keep messing with the Americans’ heads (morochit golovu).

On Sunday, after the high-level US-Russia meetings kicked off with a two-hour working dinner in Geneva, Foreign Deputy Minister Ryabkov characterized his rendezvous with US counterpart Wendy Sherman as “fantastic.” On Monday, Ryabkov’s tone changed sharply, following an eight-hour session. “We are sick and tired of empty talks, half-promises. We don’t trust the other side. We must have “ironclad, legally-binding guarantees” that Ukraine and Georgia will “never become members of NATO.”

This was not a change of heart by Ryabkov. Putin’s minion was employing his judo practitioner boss’s favored tactic of keeping your enemy off-balance. Putin believes that by keeping the West on edge as he decides on the best approach to prevent former Soviet states like Ukraine from joining NATO, Russia can achieve tactical surprise when it is ready to take action. Putin’s marching orders to the Russian delegation was “not to bend under pressure from Washington” – any “concessions are absolutely out of the question.” “The specific issue at hand must be resolved on Russia’s terms.”

Neither side expected any breakthroughs going into the meetings in Europe. Although the agenda ostensibly centered around finding a resolution for the US-Russia standoff over Ukraine, at the heart of the dispute between Moscow and Washington is a much deeper issue: Who will call the shots in Eurasia, the area that roughly coincides with the old Russian Empire — which includes . . .  — following the collapse of the Soviet Union in 1991. The Russians are fanatical in their belief that there cannot be peaceful co-existence with the US, given that the U.S. grand strategy since the 1940s has focused on preventing Russia from dominating the region. Russia views its current struggle to prevent Ukraine and Georgia from joining NATO as an existential battle with the West. It sees Ukraine as a part of its vital interests that must be defended at all costs, including going to war. Putin has been demanding from the US for years an acknowledgement of Russia’s version of the US Monroe Doctrine. He views the weak Biden presidency as an opportunity to gain acquiescence to his demands.

Instead of tossing out Russia’s ultimatum, the Biden Administration foolishly engaged in Putin’s game of showmanship. Moscow’s “treaty” proposal was written to be rejected as it demanded for security guarantees that, if accepted by Washington, would upend US 72-year old, bi-partisan foreign policy and weaken US and its allies’ security. Despite acknowledging the “non-starters” in Russia’s security proposals, the US side continued to play Putin’s game.

As Biden’s varsity team was trying to squeeze some diplomatic victories out of a doomed engagement, Moscow operatives had a completely different agenda. The Russians already knew that their proposal was a no-go for Washington. For Moscow, the whole encounter with the Americans in Europe was an intelligence gathering operation designed to assess whether the US President was going to stick to his promise that he gave to Putin last month — not to intervene on behalf of Ukraine, even if Russia invades. You see, espionage is not all about gathering secrets, although the Russians are excellent at that too. NATO can barely keep up with the expulsions of Putin’s spies from Brussels. The most valuable secret about your opponent is what we call in the intelligence business “atmospherics” intelligence, or your “read” of the mood of your adversary, especially when planning a strike. This sort of “human-terrain mapping” can only be gathered on the ground, face to face with the enemy.

Putin is a calculated, meticulous risk taker. While there’s a debate among Western analysts regarding how much of a strategist he is, most agree that he is a highly tuned-in opportunist and a brilliant tactician. On Monday, the Kremlin KGB operative claimed another victory for an impeccably executed “peace-keeping” mission in Kazakhstan, a gambit that fell onto his lap. Putin promptly deployed Russia-led forces of the Collective Security Treaty Organization (CSTO), Moscow’s counterweight to NATO, at the request of Kazakhstan’s president Tokayev. Putin proudly declared that Russia had “extinguished” a foreign-backed “terrorist attack” and will not allow any “color revolutions” in post-Soviet states. Whether Kazakhstan is a “peacekeeping” playbook that Putin will use to subdue Ukraine, will depend on what the Russian spies gleaned from their US interlocutors this week. Regardless, by finagling a secrets-gathering opportunity, Putin has outsmarted Biden again, to position himself for advantage to strike.

Rebekah Koffler is a former Defense Intelligence Agency officer and currently a strategic intelligence analyst with The Lindsey Group. She is the author of? "Putin’s Playbook: Russia’s Secret Plan to?Defeat America."