Rebecca Hagelin
|
Posted: Aug 22, 2018 12:01 AM
Share   Tweet
The opinions expressed by columnists are their own and do not necessarily represent the views of Townhall.com. 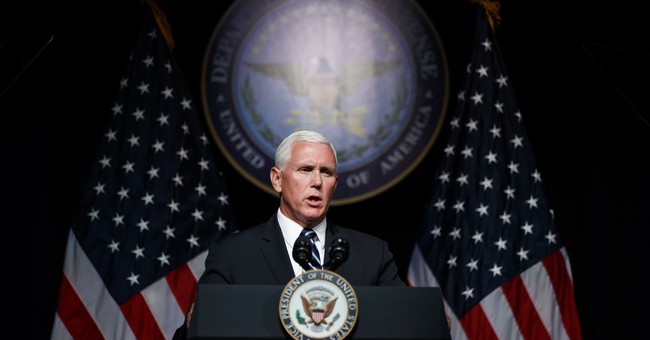 Bigotry in any form is immoral.

But it’s perfectly acceptable for the media elite when the target of the bigotry is a practicing Christian. In fact, it’s fashionable in “progressive” circles to trounce those who follow Christ.

So, it’s no surprise that Vice President Mike Pence and his faith are increasingly under attack by what Rush Limbaugh aptly calls “the drive-by media.”

Mr. Pence is honest, courageous and conservative. He is also one of the greatest and most effective statesman of our time. And at a youthful 59 years old, he still has a brilliant political future ahead of him. So, of course, the media want to politically assassinate him with their vile words.

For instance, a recent New York Times column praises a book scheduled for release later this month that belittles the vice president’s Christian faith and tries to scare readers into believing that he seeks to turn America into a theocracy, that he is determined to assert his faith on the entire nation.

If the authors of the New York Times piece or the bigoted book “The Shadow President” had bothered to actually research Mr. Pence’s faith, they would understand that a basic tenant of Christianity is that becoming a Christian is strictly voluntary, deciding to invite Christ into one’s heart is an act of free will.

Although history is filled with so-called Christians who have sought to force others to adhere to their religion, the Bible clearly teaches that God sees and judges the heart, and that only true confessions of faith in him are accepted. Our vice president not only understands the necessity of this religious freedom, he is a champion of it.

In fact, Mr. Pence is a freedom fighter. His record in Congress reveals him to be a fearless warrior for religious freedom and free speech on behalf of all Americans. Mr. Pence sponsored the Broadcaster Freedom Act of 2011; the Broadcaster Freedom Act of 2009; and The Free Flow of Information Act, as well as supported other religious freedom initiatives.

In my former role as a vice president of the Heritage Foundation, I had the privilege of inviting and hosting then-Rep. Pence to Heritage to give a speech about his legislation designed to protect the free speech of broadcasters. He was bold and inspiring as he fought for the rights of people of every persuasion to speak their minds, and he remains inspiring in his commitment to this timeless American value today.

Such a commitment to freedom threatens those who seek to turn America into a government controlled “state” where worship is allowed, but the practice of faith is not.

As the Far Left becomes increasingly vitriolic toward timeless American values like “In God we trust,” marriage defined as a union between one man and one woman, and the belief that we are a sovereign nation, they also are increasing their attacks on Mr. Pence.

The problem for the media is that it’s just not possible to find anything to legitimately expose about Mr. Pence. So they have chosen to go the decidedly un-American route and attempt to discredit our vice president simply because he is a committed Christian.

One word of caution to the elitists who seek to bludgeon Christians with bigotry: The American public is sick and tired of your hatred.

Take for example, when Joy Behar of ABC’s “The View” thought she’d get a few cheap laughs for making fun of our vice president’s belief in the power of prayer. After ridiculing him on the show, her audience revolted. ABC received so many complaints about Ms. Behar’s bigotry that she was forced to issue an apology.

While the media elite still scratch their heads as to why Evangelicals support President Trump so overwhelmingly, I find myself amazed how these so-called “journalists” don’t get it.

It’s actually pretty basic: We’re tired of being ridiculed and stepped on. We’re sick of being targeted by liberal lawyers for wanting to live out our faith. We’re done with our pastors being silenced at the pulpit, of our beliefs belittled in front of our children in public schools. We’re no longer willing to put up with activists judges who deny us our constitutional rights. President Trump understands this. Although perhaps not embracing our brand of faith as his own, he is a fierce protector of our rights — more than any president before him.

And, thanks to Mr. Trump, Mr. Pence now stands shoulder to shoulder with him as our vice president, fighting to restore the free speech rights and freedom of religion for all Americans, just as he has championed these priceless principles throughout his adult life.

Mr. Trump proves every day that decent Americans don’t have to put up with the lies and hate spewed by so many in the mass media under the guise of “news.”

So to those “journalists” who seek to persecute decent public servants like Mike Pence, you can expect your ratings to continue to be dismal, and your political influence to continue to fade.