Do This NOW if You Support Defunding Planned Parenthood

Rebecca Hagelin
|
Posted: Jul 26, 2018 12:01 AM
Share   Tweet
The opinions expressed by columnists are their own and do not necessarily represent the views of Townhall.com. 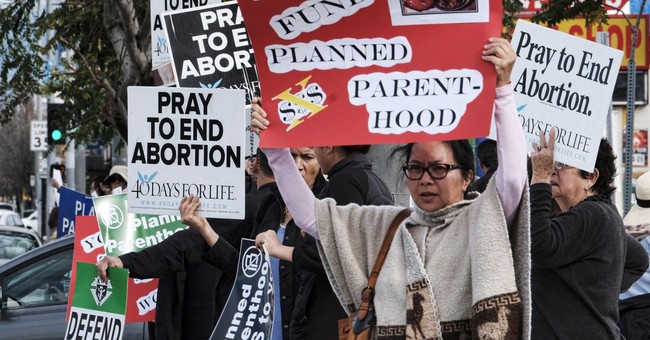 If you are disgusted with your personal financing of abortion, it’s time to make your voice heard and help stop the madness.

“Hold on,” you might say. “I’ve never paid one red cent for an abortion, nor would I ever!”

The hard, cold truth is that if you pay federal income tax, then you are subsidizing Planned Parenthood’s abortion industry. The murderous organization receives $500 million every year from the federal government, with some $50 million to $60 million of those funds going to directly finance the butchering of innocent babies.

As immoral and abhorrent as that is, most of us shrug our shoulders, thinking it’s just the way things are. The pro-abortion thugs are so good at duping decent, hard-working taxpayers into accepting the premise that it’s our duty to support immoral projects — like the killing of babies — that far too many of us have become numb to the madness. We have resigned ourselves to simply accept our forced payments to the devil himself.

Abortion is evil, a wickedness destroying the lives of children and the spirits of their moms.

When we pay Planned Parenthood to kill babies, we also are paying it to wreak havoc in the lives of their mothers. The moms who find themselves in the midst of a crisis pregnancy are often scared and lonely, mistakenly believing Planned Parenthood’s lies that killing their preborn child will end their “problem.” We know from thousands of testimonials from moms who suffer from post-abortion syndrome that while abortion indeed ended the life of their baby, their personal nightmare of depression, regret and problems was only just beginning.

And our souls suffer too. Every time our money is used to cause a precious baby and his mom to fall victim to Planned Parenthood, you and I become a bit more complicit in this great American holocaust that is abortion.

Since the Republican-controlled Congress can’t seem to deliver on its pledge to stop forcing us to fund Planned Parenthood’s murderous rampage, President Trump wisely and boldly found a way to break through the bureaucracy to reduce at least some of the blood money.

In May, the president proposed the Protect Life Rule, which seeks to direct the family planning grants falling under Title X to go only to health care providers that do not perform abortions. If the rule is enacted, it means that $50 million to $60 million currently going to Planned Parenthood would immediately dry up.

But action is required on your part to make this happen, thanks to the red tape and massive monster that is our government. Until July 31 we are in what’s called a “Public Comment” period, wherein the Department of Health and Human Services, which oversees the funding, is collecting feedback on the proposed rule. HHS then will consider all the comments and make a final decision on whether to adopt the rule.

With the deadline for comment just days away, please stop what you are doing right now and let your voice be heard.

The nation’s leading pro-life organization, the Susan B. Anthony List, has made it easy for you to share your support for the rule through a web page it has set up for this purpose. Just visit www.ProtectLifeRule.com and in a few minutes you can express how you feel about this life-affirming initiative.

Mr. Trump’s action reminds us of how important it is to have a brave, pro-life president who will fight for innocent lives and protect the consciences of decent Americans who find abortion repugnant. In 1988 President Ronald Reagan issued such restrictions for the use of Title X funding, and the U.S. Supreme Court upheld the action when pro-abortionists challenged the rule in court in an attempt to continue to force taxpayers to pay for abortions.

Tragically, when President Bill Clinton claimed the White House, he quickly reversed the Reagan restrictions, sentencing you and me to pay Planned Parenthood to kill babies ever since.

While much work remains to protect the lives of the most innocent among us and stop all forced payments for abortion, the Protect Life Rule will have a tremendous impact.

Please take the time to support Mr. Trump’s initiative by letting your voice be heard. After you’ve submitted your comment, take one more step and ask 10 of your friends to submit their comments of support too. You can do so by simply forwarding them this column or directing them to www.ProtectLifeRule.com.

Remember, the collection of public comments ends on July 31. Please do your part in garnering overwhelming support to protect both lives and shine a light on the madness and immorality of forcing tax-payers to fund the killing of the most innocent among us.

The Day the Electricity Died
Townhall
WaPo BREAKING big story about maker of rifle used in Uvalde donating to Republicans *GASP* does NOT go well
Twitchy
It's Finally Happened: A Call Rings Out for Bill Maher to Be Fired
Redstate
Why the Heck Did Amber Heard's Legal Team Call Her Back to the Stand?
PJ Media