Melania Trump: The Media’s Disgusting and Vain Attempts to Destroy a Class Act

Rebecca Hagelin
|
Posted: Jun 14, 2018 12:01 AM
Share   Tweet
The opinions expressed by columnists are their own and do not necessarily represent the views of Townhall.com. 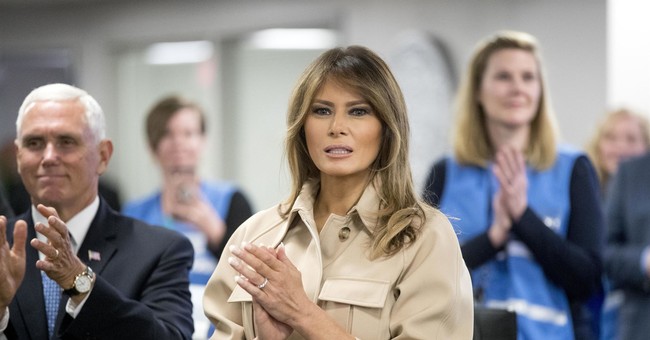 First lady Melania Trump is thoughtful, classy, intelligent and kind. And it drives the media nuts.

There’s nothing — not one thing — to legitimately criticize Mrs. Trump about. So they create fake news (aka: lies) in a vain attempt to vilify, discredit or embarrass her.

But the media are failing miserably. Mrs. Trump is undaunted by their childish and tawdry attacks, showing a level of maturity and good judgment infrequently seen these days. Our first lady’s unique and powerful combination of confidence and humility enables her to rise above the sophomoric complaints and rumors that fill the internet and the fake news cable monsters like MSNBC and CNN.

The press make the most mindless comments, whether she is doing what she thinks is best for her son, like staying in New York while he finished school last year (“How awful for her not to move immediately to the White House!”); or delivering a subtle yet powerful message about women’s rights by refusing to don a head scarf while in Saudi Arabia (“How dare she let her hair blow in the wind!”); or serving meals to victims of Hurricane Harvey (“She had the nerve to leave the White House wearing high heels!”); or planning and executing every detail of the classiest welcome of a foreign leader and state dinner in recent history (“Oh my, her hat brim was too wide!”); or launching her “Be Best” initiative to help America’s children overcome modern challenges (“Wait! Michelle Obama once uttered the phrase, ‘be better’ — Melania stole the idea from her!”).

Their tripe would be laughable, except it’s irresponsible and dangerous for the “news” media to spew so much drivel that Americans have a hard time finding out what’s really going on in the world.

Particularly stupid are the stories they continue to conjure up en massé to explain Mrs. Trump’s “mysterious” absence from the spotlight over recent weeks. The media care not that we knew she had surgery, or that the details are none of our business, or that she’s entitled to privacy. They’re ticked off that she doesn’t answer to them — and that she is increasingly beloved by the public despite the media’s best attempts to hurt her.

Also maddening is the fact that the mass media should be promoting the First Lady’s “Be Best” initiative as it works to instill kindness, integrity and courage in America’s youth.  The three areas of focus of the “Be Best” program are to improve the general well-being of children through character development; to help them use social media safely and respectfully; and to help our sons and daughters from becoming victims of the drug epidemic that is quickly destroying futures and lives across the country. Tragically, it seems that the American media care more about hurting the First Lady than they do about helping children. They should hang their heads in shame.

Although the media elite seek to destroy our first lady, Mrs. Trump will triumph because her grace is stronger than their biggest lies.

During the GOP presidential primaries, many of us (myself included) who were passionate about campaigning for other candidates fought hard to keep Donald and Melania Trump from landing in the White House. But the actions of both Trumps have since obliterated the concerns I had about how they would perform as president and first lady. To put it bluntly, I was wrong in tone and substance.

But while people of good faith and good will can admit when we’re wrong, don’t expect the mass media to ever do that. Since President Trump’s successful freedom policies directly threaten the media’s radical, socialist agenda, they will continue to relentlessly attack and lie about him and his wife. Day after day. Week after week. Headline after headline.

Melania Trump has brought a level of grace, class and beauty to the White House unmatched by any first lady before her. While I once had my doubts, I now thank God for her service and example. We are blessed to have such a remarkable woman representing our nation on the world stage.

As each day passes, Mrs. Trump continues to gain the respect and admiration of decent people at home and abroad. From world leaders, to “regular folks” across the country, she inspires and influences people of all ages to not just be better but to truly “be best.”