General Kelly: Working with President Trump to Restore the Sacred

Rebecca Hagelin
|
Posted: Oct 25, 2017 12:01 AM
Share   Tweet
The opinions expressed by columnists are their own and do not necessarily represent the views of Townhall.com. 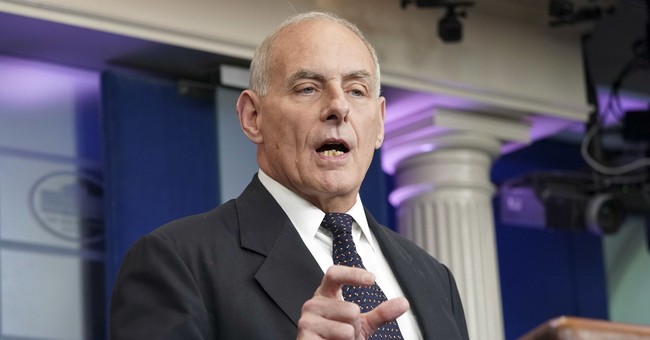 If ever there was an officer and a gentleman, it is retired Marine Gen. John Kelly.

Last week, the White House chief of staff directly addressed the offensive politicization of President Trump’s personal phone call to the grieving widow of a courageous Green Beret who gave his life in a distant land.

While much has been said about General Kelly’s moving tribute to those who pay the ultimate price for our freedom and the Gold Star families who live the continuous nightmare of their loss, his other declarations regarding our culture are worthy of our appreciation and reflection too.

“You know, when I was a kid growing up, a lot of things were sacred in our country,” General Kelly said. “Women were sacred, looked upon with great honor. That’s obviously not the case anymore as we see from recent cases. Life — the dignity of life — is sacred. That’s gone. Religion, that seems to be gone as well.”

The fact that our president’s chief of staff publicly recognizes the tragic loss when the sacred becomes disposable exemplifies why he is the right person to be advising the most powerful leader in the world.

General Kelly’s words of truth also starkly reveal what happens when “progressive” mandates permeate our culture. It is what naturally occurs when progressives control anything — things get progressively worse and chaotic.

We now live in a society where women are no longer treated like ladies, and where we are discouraged from acting like ladies too. From the loss of chivalry to the prevalence of pornography, from the increase of sex education at younger ages to the crude tone and verbiage of our discourse, it is painfully clear that the general is right.

Progressives gave us both “free sex” and radical feminism. The result? Boys are taught that they are expected to have sex with our young daughters and that showing them respect means nothing more than wearing a condom. And our girls are taught that such mistreatment is not only acceptable but is to be encouraged.

Why are we then so shocked when we learn of “Harvey Weinsteins” and an entire industry of adults that accommodate such disgusting, dehumanizing behavior?

And, what about the sacredness of life itself? We live in a society where preborn babies are treated as something less than human, where the elderly and sick are kicked out of our homes by the millions and shuffled off to be warehoused out of sight. From the tax-payer funding of an organization that sells human baby body parts, to the practice of killing the “imperfect” or very ill, it is painfully clear that the general is right.

As for religion no longer being sacred, just dwell on that statement for a moment and digest the horror of its meaning: Religion itself, is no longer sacred.

We must face the reality that we live in a society where the freedom to practice one’s religion is being systematically destroyed by progressive activists. From bakers, photographers, and filmmakers being fined and threatened with jail for refusing to violate their deeply held faith, to the silencing of clergymen who dare to preach the Bible, it is painfully clear that the general is right.

General Kelly, thank you for your years of service on bloody battlefields, where you led and fought to preserve America. You deserved to retire to a life of comfort and ease, but instead, you have chosen to again make yourself vulnerable, and this time, to lead us in the battle for the soul of our homeland.