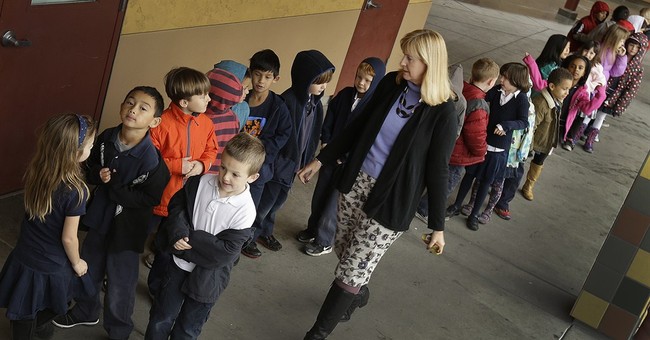 You’ve shopped the sales and tax-free holidays, met your child’s teacher, and mapped out your “school schedule.” It’s back to school time, the buses are rolling, and everything seems familiar.

But is it really?

As the new school year begins, our children will be immersed in a very different school climate from a year ago—one that’s light years away from our own school years.

What’s changed? More than the technology of ever-faster computers, millions of Apps, and smartphones in every child’s pocket, the social and moral climate within our schools has turned an ugly corner, and poses sharp new challenges for children who are religious believers.

Emboldened by the Supreme Court’s decisions allowing marriage benefits for homosexuals, the left is stepping up its assault on anything and everything that recognizes traditional marriage or honors the natural distinction between males and females.

Our public schools are a prime battleground; our children are in harm’s way. It’s up to us to make sure that our children do not become the “collateral damage” from the left’s relentless strikes against marriage and heterosexuality.

Let me give you some examples of how the anti-God, anti-marriage activists will be taking their message to schools this fall.

We all agree that bullying and cruelty—towards any child, not just those who experience same-sex attraction—is deeply wrong and must not be tolerated within a school community. But in many of today’s public schools, you can expect that righteous indignation over bullying will be turning into campaigns to stomp out “hetero-normativity”—the presumption that “heterosexuality is the expected norm and that somehow LGBTQ teens are ‘abnormal.’” ‘Heterosexism,’ after all, has been described by the American Academy of Pediatrics as more “insidious and damaging” than plain ole’ homophobia.

Language, books, materials, teachers’ examples are all likely to be peppered with more “inclusive” references to homosexuals, so that students will become used to thinking that homosexuality is just as “normal” as heterosexuality. No “heterosexist” assumptions allowed. For the social reformers, creating a climate the does not affirm homosexuality as normal, natural, and positive is the equivalent of creating an environment rife with damaging “stigma” towards homosexuals.

All of this raises questions, of course, for the student who believes—and openly affirms—that marriage is the union of a husband and wife.

Will your school respect the beliefs that you have sought to instill in your child? Is your child likely to be called a bigot or a homophobe if he or she extols the benefits of traditional marriage? How will the principals, teachers, and curriculum materials refer to political activity by homosexual activists? Will they talk about “marriage equality” as if that’s the desirable state of the law?

Will your school require children to use “inclusive” language, even if doing so violates your child’s religious beliefs? (This is especially relevant in California and Massachusetts, where schools are required to treat ‘transgender’ individuals according to their ‘preferred’ gender and to insist that students do so as well. No matter what regular kids believe.)

How to Save Your Family: Be Proactive. Take on the Culture.

Parents, be proactive on behalf of your children.

Reinforce to them what you believe about marriage and gender, and why. Counsel them, according to age, on what they might expect to encounter in particular classrooms, on the bus, or through the curriculum, how it might challenge their beliefs, and how to respond.

Talk to your principal and your child’s teachers about your concerns, but go a step further. Share your expectations with them in a positive way: Insist that they (and other staff and students) respect your child’s religious freedom to uphold marriage as between a man and a woman. Let them know that you are confident that they will preserve a respectful climate in the classroom, free from bullying and labeling directed towards your children as well as others. Offer to help educate teachers, students, and staff about the religious and speech rights of all students.

And finally, pray daily for your children, their teachers and administrators—and for our country.