What Does Detroit and Social Security Have in Common? 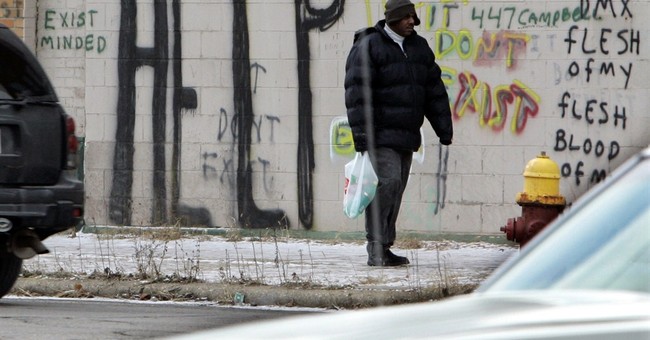 There’s a pretty good case to be made that if you ran an investment company the same way as the Government runs Social Security, you’d be sharing a small room with Bernie Madoff. . . Romina Boccia, from Heritage, joined the program to discuss SSI’s 78th birthday. Also: Elbert Guillory is now heading up a PAC for conservative African-Americans.

Once again, the media is sooooo close, and yet sooooo far away, from actual reporting. Bloomberg news reported on the surprising amount of “freelance” workers in recent years.

Fine. I’ll be the one to say it. You see that giant pink elephant in the room? Yeah, that’s Obamacare.

Wait. . . We’re not done. Bloomberg news also touched on the fact that workers, after accounting for inflation, are making a whole lot less today than they used to make:

You have to love Sara Eisen in that clip. . . Walmart just posted disappointing sales numbers and she’s thinking “what a stimulus if Walmart would just up its employee’s pay.” Is it asking too much to have people on these shows who understand business?

Wow. . . Rarely is such a damning picture of the Obama Administration so easily convertible to an excel spreadsheet.

Ezra Klein handed over his propagandistic column to the Al Gore, so that they might explain the dangers of Man-bear-pig.

Wha!! No-way! A Secret Court has decided that the NSA’a Secret Spying program is Secretly unconstitutional. . . Now we put the NSA on double secret probation, and. . .

You read about those three black teenagers who killed the Australian Jogger in Oklahoma, “for the fun of it.”. . . Amazing how little attention the story gets from the same media (and White House) that couldn’t stop talking about Trayvon Martin.