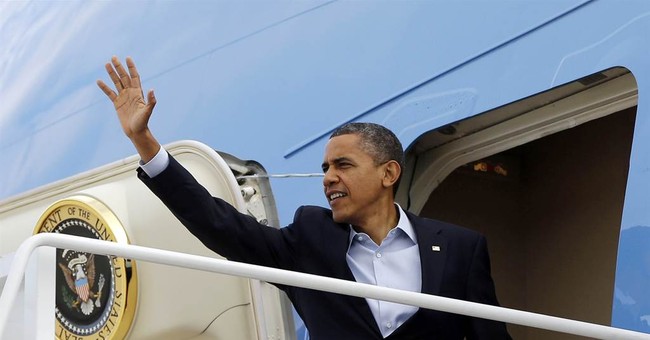 Two presidents during the last 50 years captured the hearts and imagination of the American people like no others: John Kennedy and Ronald Reagan. Their rhetoric and their vision stirred people to believe and to act; they helped define the eras in which they lived.

In 2008, then candidate Barack Obama identified both as presidents worthy of his emulation in terms of changing the “trajectory” and the atmosphere of the country. After five years, he has failed to capture the magic of our 35th and 40th Presidents and the reason is becoming perfectly clear. Though he is a gifted orator, the vision he has offered does not comport with reality, nor resonate with the true American spirit.

Some of the most memorable phrases of Kennedy’s and Reagan’s presidencies capture the essence of the vision each cast.

Of course Kennedy’s most famous words were his summoning call from his Inaugural Address, “Ask not what your country can do for you, but what you can do for your country.” The vision Kennedy offered was primarily focused on a belief in the American people as the source of change and hope and strength, and not the government. The Kennedy Administration became known as the “New Frontier,” a phrase taken from his speech accepting the Democratic nomination in 1960. “The New Frontier of which I speak is not a set of promises, it is a set of challenges. It sums up not what I intend to offer the American people, but what I intend to ask of them. It appeals to their pride, not to their pocketbook…My call is to the young in heart, regardless of age – to all who respond to the Scriptural call: “Be strong and of good courage; be not afraid, neither be thou dismayed.”

Like Kennedy, one phrase from Reagan’s first inaugural address, encapsulates the core belief of his presidency. As the nation faced the most severe recession since the Great Depression, he said, “In this present crisis, government is not the solution to our problem; government is the problem.” He too put his faith in the revival of a stout hearted American spirit. He said in accepting the Republican nomination in 1980, the people of the United States “are concerned, yes, but they are not frightened. They are disturbed, but not dismayed. They are the kind of men and women Tom Paine had in mind when he wrote--during the darkest days of the American Revolution—‘We have it in our power to begin the world over again.’ I ask you to trust that American spirit which knows no ethnic, religious, social, political, regional, or economic boundaries, the spirit that burned with zeal in the hearts of millions of immigrants from every corner of the Earth who came here in search of freedom.”

During his first term, Reagan quoted Kennedy more than any other President, far-and-away, as he pushed for across the board tax cuts to spur economic growth and put the American people back to work. For both men, proposing a tax cut while the federal government was running a deficit was an act of faith in the people’s ability to take the country to new economic heights. Both were right. Following the cuts, the U.S. economy boomed in the 1960s and 80s, averaging 5 percent per year, causing federal tax revenues to soar and the unemployment rate to drop to under 5 percent.

In his first Inaugural Address, Barack Obama, stated the central tenet that would shape his presidency. “The question we ask today is not whether our government is too big or too small, but whether it works -- whether it helps families find jobs at a decent wage, care they can afford, a retirement that is dignified.” Did you catch that? The government and not the people is the final guarantor of success. Barack Obama when accepting the Democratic nomination in 2008 directly took a shot at the JFK/Reagan vision calling it, “that old, discredited Republican philosophy - give more and more to those with the most and hope that prosperity trickles down to everyone else.”

President Obama and the Democrats acted on their core beliefs by passing the $1 trillion Stimulus Bill, the $3 trillion ObamaCare program, and increasing taxes substantially on job creators. Federal spending is up $700 billion per year since 2009, and the Administration has added nearly $7 trillion in new debt in less than five years. This bigger government does not work. Economic growth, ranging mostly between 1 to 3 percent, is far weaker than previous recoveries; unemployment remains above 7 percent four years into the Obama recovery; and ObamaCare is, of course, an unmitigated failure with millions losing their healthcare plans and premiums skyrocketing.

The American people are sensing something is amiss. Barack Obama’s approval rating has dropped to 39 percent. Nearly 70 percent of Americans believe the nation is on the wrong track.

John Kennedy and Ronald Reagan inspired confidence in Americans with a vision that put faith ultimately in the people, not the government. The nation was a far better place for both having served. Barack Obama came to power at a time when America could have really used a leader of their caliber, but unfortunately he lacked their vision and has discovered there is a limit to what your country can do for you.