As Alaska Goes, So Goes America? 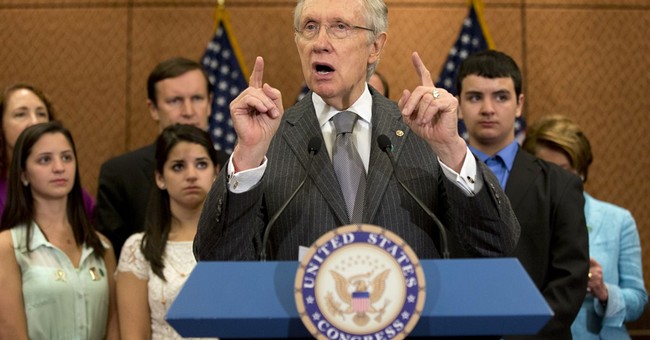 The Republican Party experienced disaster in 1974 following Watergate, the granddaddy of all modern political scandals, losing 49 seats in the House and four in the Senate, giving Democrats a filibuster-proof majority in that body. When Reagan won his second term in 1984 (carrying 49 out of 50 states), the GOP held a 53 to 47 majority in the Senate only to give up 8 seats in 1986 and control to the Democrats following the Iran-Contra Affair.

Bill Clinton sold himself as a New Democrat in 1992, but after seeking to implement Hillarycare and raising taxes, voters sent his party to the cleaners in 1994, with the Republicans gaining back control of the House (in a 54 seat swing) and the Senate (9 seat change) for the first time since the 1950s.

The mid-term elections of 2010 followed a strikingly similar path. After the passage of the Stimulus Bill and Obamacare, the Democrats experienced the greatest reversal of party fortunes in House history. The GOP picked up 63 seats and leadership of the House, as well as 6 seats in the Senate, though Democrats retained control of that body.

Both scandal and unpopular policy choices are once again in the mix as 2014 begins to take shape, and the outcomes in a few key states may change the entire balance of power in Washington.

That Republicans will maintain control of the House seems almost a given with historic trends and their 33-seat majority. All eyes then turn to the Senate, where Harry Reid’s Democrats hold a working 54 to 45 edge (including 2 independents that caucus with them). There are 35 seats up for re-election next year: 21 held by Democrats and 14 by Republicans. Of those, 10 seats appear solidly in play according to the Cook Political Report, and Democrats hold them all. Cook rates three seats “tossup” (Iowa, Montana, West Virginia) and seven “lean Democrat.” The Rothenberg Report lists the same three as “pure tossup” and moves two of Cook’s “lean Democrat” to “tossup/tilt Democrat” (Alaska and North Carolina.)

If Republicans can win the three tossups and pick up only two of the lean/tilt Democrat seats, we'll see a seismic shift in Washington's balance of power. Harry Reid will no longer be majority leader of the Senate, and DC will no longer be a two-thirds Democrat-controlled town.

How likely is this scenario? Drilling further into the data, it appears well within the GOP’s grasp. All three Senate tossup seats are in states Mitt Romney won in 2012. Four of Cook’s seven “lean Democrat” seats are in Mitt Romney states as well: Alaska, Arkansas, Louisiana, and North Carolina. Republicans once again appear to have the wind at their backs as in 2010, with more unpopular policy choices and the added drag of White House scandals dragging down congressional candidates.

As the full weight of Obamacare begins to impact Americans' everyday lives, driving up premiums and causing millions of employers to drop coverage, its unpopularity seems likely to grow. A NBCNews/Wall Street Journal poll released earlier this month found disapproval of the law at an all-time high at 49 percent (up from 44 percent a year ago); only 37 percent think the law is a good idea. Those senators who voted for and championed its passage must now stand for re-election. Senators like Alaska’s Mark Begich, Arkansas’ Mark Pryor, and North Carolina’s Kay Hagan will face high hurdles indeed.

The three tossup seats of Iowa, Montana and West Virginia are all vacancies due to the retirements of Senators Tom Harkin, Max Baucus, and Jay Rockefeller respectively. Baucus, who helped shepherd Obamacare through its narrow Senate passage, famously called its implementation to date a “train wreck” and shortly thereafter announced his retirement. Add to that train wreck the Obama Administration’s IRS, State and Justice Department scandals, as well as slow economic growth and record deficits, and one understands why only 31 percent of Americans feel the nation is on the right track (down from over 40 percent last fall).

Sixty-two percent believe we are on the wrong track: this almost exactly the same figure as in November of 2010. The motivation to bring about a re-balancing of power in Washington looks very high.

One caveat for those freedom-loving Americans who want to bring about real change and hold the executive branch accountable to the people: guard against Pyrrhic victories. This is no time for milk toast Republicans. Ending up with a majority in name only and with senators who are more a hindrance than an aid to true reformers would be tragic. The future of the country rests on bold action. Senators that states like Alaska, North Carolina, Montana, Iowa and West Virginia send to Washington will hold the keys to a better tomorrow in their hands, as well as the power to stand by as the country continues down its current perilous path.