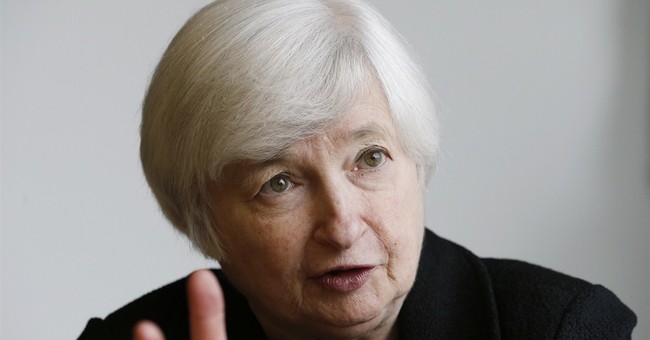 Janet Yellen gave a widely noted speech, Perspectives on Inequality and Opportunity from the Survey of Consumer Finances, at the Conference on Economic Opportunity and Inequality held by the Federal Reserve Bank of Boston on October 17th.

The speech presented as a if ghostwritten for her by Quincy Magoo, that beloved cartoon character described by Wikipedia as “a wealthy, short-statured retiree who gets into a series of comical situations as a result of his nearsightedness compounded by his stubborn refusal to admit the problem.” What was most interesting was how political was the speech… and what Madame Yellen didn’t say.

Her omission even raised an eyebrow of one of the commentariat’s most astute Fed sympathizers, The Washington Post‘s Ylan Q. Mui. Mui: “Yellen did not address in her prepared text whether the Fed has contributed to inequality. Nor did she weigh in on whether it may actually be slowing down economic growth, an idea that is gaining traction among economists but which remains controversial.”

The monetary policy of the United States has a profound impact on wage growth and prices, both domestically and internationally. Hence the importance of a thorough, objective, and empirical look at its policies — from Bretton Woods through the era of stagflation, the Great Moderation, and the “Little Dark Age” of the past decade.

That is why the Brady-Cornyn Centennial Monetary Commission, and the Federal Reserve Transparency Act which recently passed the House with a massive bipartisan majority, are critical steps forward to ending wage stagnation and helping workers and median income families begin to rise again. As President Kennedy once said, “Rising tide lifts all boats.”

Madam Yellen addresses four factors in what she calls “income and wealth inequality.” Madame Yellen stipulates that “Some degree of inequality in income and wealth, of course, would occur even with completely equal opportunity because variations in effort, skill, and luck will produce variations in outcomes. Indeed, some variation in outcomes arguably contributes to economic growth because it creates incentives to work hard, get an education, save, invest, and undertake risk.”

Even with that ostentatious stipulation, the Fed Chair’s speech is amplifying one of the Democratic Party’s foremost election themes, “income inequality.” The New York Times‘s Neil Irwin observed of this speech: “Nothing about those statements would seem unusual coming from a left-leaning politician or any number of professional commentators. What makes them unusual is hearing them from the nation’s economist-in-chief, who generally tries to steer as far away from contentious political debates as possible.”

Her speech could be read as an Amen Corner to Elizabeth Warren’s stump speech, on behalf of Sen. Al Franken’s reelection effort, that “Thegame is rigged, and theRepublicans rigged it.” Her speech could be read as a little election-season kiss blown to Sen. Franken (D-Mn), who voted for her confirmation and then glowed on Madame Yellen very publicly.

One cringes at the thought that the Fed even might be giving the appearance of playing politics. To align the Fed, even subtly, with either party’s election themes during an election season would seem a deeply impolitic, and unwise, violation of the Fed’s existential principle of political independence. House Financial Services Committee chair Jeb Hensarling and Sen. Mike Crapo (R-Id), should he accede to the chairmanship of the Senate Banking Committee, might just wish to call up Madam Yellen for a public conversation about avoiding even the appearance of impropriety.

The Fed’s independence is as critical as it is delicate. To preserve it demands as much delicacy by the officials of the Federal Reserve System as by the Congress. As Barack Obama might say, here is a “teachable moment” for our new Fed chair.

Also troubling is the decision by the Chair to focus her mental energy, and remarks, on four areas entirely outside the Fed’s jurisdiction: resources available for children; higher education that families can afford; opportunities to build wealth through business ownership; and inheritances. These might be splendid areas for a president’s Council of Economic Advisors (which Madame Yellen chaired, commendably, under President Clinton). Good topics for a professor emerita at the University of California, Berkeley, Haas School of Business, as is Madam Yellen.

They are, however, at best mere homilies from the leader of the world’s most powerful central bank. We would like to hear Madam Yellen talk about monetary policy and its possible role in the diminishing of economic mobility. It does not seem like too much to ask.

Since Madame Yellen, rightly, is considered an eminent Keynesian (or Neo-Keynesian), why not begin with Keynes? In The Economic Consequences of the Peace, Chapter VI, Keynes addressed this very point. The brilliant young Keynes was addressing the insidious power of inflation, not now in evidence and not portended by the data. Yet let it be noted that there is more than one way to debauch a currency:

Lenin is said to have declared that the best way to destroy the capitalist system was to debauch the currency. … By this method they not only confiscate, but they confiscate arbitrarily; and, while the process impoverishes many, it actually enriches some. The sight of this arbitrary rearrangement of riches strikes not only at security, but at confidence in the equity of the existing distribution of wealth. Those to whom the system brings windfalls, beyond their deserts and even beyond their expectations or desires, become ‘profiteers,’ who are the object of the hatred of the bourgeoisie, whom the inflationism has impoverished, not less than of the proletariat. …

Lenin was certainly right. There is no subtler, no surer means of overturning the existing basis of society than to debauch the currency. The process engages all the hidden forces of economic law on the side of destruction, and does it in a manner which not one man in a million is able to diagnose.

America and the world needs, and rightly expects, the chair of the Federal Reserve to be that one in a million able to diagnose. Madame Yellen is called upon to step up her game and pivot from pious homilies to the heart of the matter. If Keynes could call out how bad monetary policy can strike “at confidence in the equity of the existing distribution of wealth,” perhaps so too ought his followers.

What is to be done? Wikipedia also observes of Mr. Magoo that “through uncanny streaks of luck, the situation always seems to work itself out for him, leaving him no worse than before.” We devoutly hope that Madame Yellen — and, thus, the economy — will be the beneficiary of “uncanny streaks of luck.” Hope is not a strategy. Relying on luck tautologically is a dicey way of bringing America, and the world, to a renewed state of equitable prosperity.

Rely on luck? It really is time to shift gears. An obvious place for Madame Yellen to begin would be to register active support for the Brady-Cornyn Centennial Monetary Commission designed to conduct a thorough, empirical, bipartisan study of what Fed policies have worked. What policies of the Federal Reserve have proven, in practice, or credibly portend to be, conducive to equitable prosperity and healthy economic mobility?

Should the correlation between the (infelicitously stated if technically accurate) “40 years of narrowing inequality following the Great Depression” and the Bretton Woods gold-exchange standard be ignored? Why ignore this? Should the tight correlation of “the most sustained rise in inequality since the 19th century” with the extended experiment in fiduciary dollar management be ignored? Why ignore that?

What might be learned from the successes of the Great Moderation inaugurated by Paul Volcker? Is Volcker’s recent call for a “rules-based” system, a position from which Madam Yellen staunchly dissents, pertinent? Discuss.

Madame Yellen? Let’s have a national conversation about monetary policy and its effects on economic mobility. It really is time to bring to a decisive end many decades of Magooonomics and the disorders that derive therefrom. Fire Magoo. Show the world that you are Keynes’s one in a million.