Who is Rand Paul? 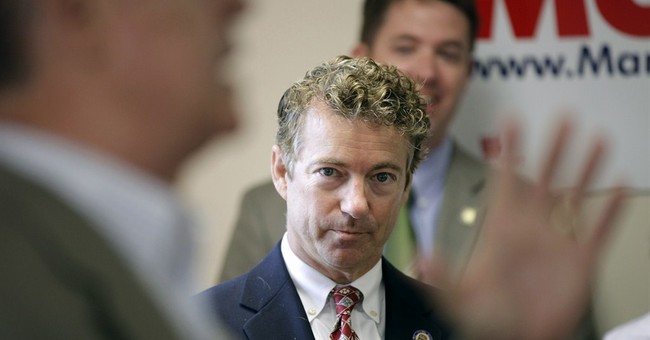 For starters, Rand is short for Randal, not an allusion to Ayn Rand, after whom Sen. Paul was not named by his libertarian (not Objectivist) father Ron Paul. Reportedly, growing up he was called Randy … until his wife shortened the diminutive to Rand.

Washington, ordinarily, is committed to maintaining the status quo or making, at best, incremental changes. As we struggle with the political consequences of the end of an era of all-out war the old political status quo is ripe for transformation.

Paul shows signs of being the key transformational figure. If he himself understands the depth of this proposition he well might become unstoppable.

As Aaron Blake, a columnist for the ever-conventional Washington Post, says, “Rand Paul is an enigma wrapped in a riddle. And four years after he burst on to the scene in the 2010 Kentucky Senate race, we’re still trying to figure out precisely who he is.”

August was a bit of a roller coaster PR month for U.S. Senator Rand Paul. He caught flak for denying a change of view on foreign aid, specifically to Israel, and got static for including a fundraising trip (for a local library) in the Hamptons during a family commitment to which he gave priority over a Family Leadership Summit in Ames, Iowa.

Then Paul upped the ante with his Time Magazine essay We Must Demilitarize the Police. Particularly noteworthy was his observation that “If I had been told to get out of the street as a teenager, there would have been a distinct possibility that I might have smarted off. But, I wouldn’t have expected to be shot.”

This essay brought him more flak from the law-and-order right’s Bob Patterson and from “reform conservative”– meaning the Washington Post’s version of “conservatism” – Michael Gerson. Gerson belatedly exalts Jack Kemp, to whose supply-side wing of the GOP Gerson never belonged, and denigrates Paul.

As World War II bomber pilots used to say, “If you’re not catching flak you’re not over the target.” So the flak provides evidence that Sen. Paul might be “over the target” in a probable drive to Occupy 1600 Pennsylvania Avenue. Naturally, his rivals for that office will attack, and the mainstream media, that Neo-Spanish Inquisition, will be Very Inquisitive. As for his rivals…

There are two major factions within the GOP. The Establishment Moderate (and big donor Chamber of Commerce) faction was uniting behind Gov. Chris Christie until Gov. Christie stubbed his toe, hard, on a bridge abutment. The Establishment, since Christie’s stumble, now is leaning toward former governor Jeb Bush. Mitt Romney, chastely protesting disinterest, appears to be waiting in the wings for Gov. Bush to bow out.

But (writing as a member of the Tribe) it’s not a homogenous group. Sen. Ted Cruz leads in the Tea Party demographic. Yet Cruz’s base support, at 15%, is by no means overwhelming. Cruz polls, therein, barely ahead of Jeb Bush. Also, the Tea Party is a vociferous but distinctly minority segment even of the steadfast conservatives.

The steadfast conservative base for the Iowa caucuses roughly divides, in a manner lost on most of the mainstream media, between the anti-big-government Tea Party and the social-issues-devoted religious right. It’s not at all clear that Sen. Cruz’s popularity in the anti-government Tea Party will propel him to victory over a candidate who appeals more directly to evangelicals. His appeal to religiously serious Catholics (who tilt more favorably toward a government role in social insurance and social justice) is even less apparent.

Favorite sons of the religious right have included Gov. Mike Huckabee and Sen. Rick Santorum. Gov. Huckabee polls well in Iowa (where he won in 2008). Yet Gov. Huckabee has not committed to running and well may not. Sen. Santorum won Iowa — in the recount — in 2012. In this cycle, however, rather than focusing on values issues he seems to be retooling as a populist champion of blue collar workers.

Focus on the economic plight of median income families is shrewd. Yet it’s unclear that Sen. Santorum’s endorsement of such Big Government nostrums as raising the federal statutory minimum wage will prove an apt way to excite a steadfast conservative base. The free market is doctrinal to the base.

Steadfast conservative commentator Erick Erickson is curiously dim on the evangelical appeal of Huckabee and Santorum. He calls Ben Carson “a novelty.” Erickson describes Rand Paul as “too far removed” (which, in context, represents praise by faint damning).

Erickson floats the names of Bobby Jindal, Ted Cruz and Rick Perry as “three candidates who seem most able to tap into evangelical angst.” Recasting the smart but technocratic Jindal as a religious right favorite seems a stretch. Cruz, as noted above, has achieved Tea Party rock star status with his lion-tamer act against Uncle Sam. Yet Cruz has shown himself, so far, as much better at being oppositional than as a candidate with a positive agenda. Righteous indignation will only take him so far. The charismatic Perry well might emerge as a contender… if he, this round, can find, and keep, his footing.

As the voters begin to focus religious conservatives may find Sen. Paul far less “removed” than at first blush. Sen. Paul is Senate sponsor of pro-life personhood legislation about which he says “I am 100% pro-life. I believe life begins at conception and that abortion takes the life of an innocent human being.” This gives values voters a very good reason to fall in love with Sen Paul.

If Paul expands his fierce defense of the Bill of Rights beyond the Fourth and Fifth Amendments, his current focus, he is positioned to make himself the leading champion of religious liberty. That’s a politically impregnable position, a way of making palatable a principled defense of liberty to less conservative constituencies the nominee will need to win.

There’s more. Rand Paul, like his father, the iconic Ron Paul, is a medical doctor. This matters.

Politics is replete with lawyers. All of the leading Democratic presidential contenders are lawyers. (The GOP field offers, at least in this area, much greater diversity.)

The three most transformational political figures in this columnist’s lifetime — Ronald Reagan, Jack Kemp, and Charlie Wilson — were not lawyers. Reagan had been an actor, Kemp a champion football quarterback, and Wilson a Naval officer.

Actors embody narrative. Athletes and officers play to win rather than merely hold on. Physicians think in life and death terms. This mindset represents a profound dispositional difference from that of most politicos. Lawyers by training and disposition simply mitigate risk. Rand Paul “thinks different.” America is hungry for someone different.

Tactically, Paul portends profound fundraising capability both with the rank-and-file wherein his father raised many millions through “moneybombs” and from the wealthy libertarian-leaning. There is an army of hundreds of thousands of well-organized political foot soldiers deeply loyal to Paul. This grass roots network is unrivaled by any other prospective candidate.

Paul has proved to have crossover appeal to youth. And he demonstrates a heartfelt, rather than merely tactical, commitment toward inclusion of ethnic voters.

Most important, his message (rather than “messaging”) may perfectly capture the mood of war weary, big-government-skeptical, voters (across the ideological spectrum). As this columnist has noted, the improbable Barack Obama’s candidacy’s distinguishing feature was a promise to bring home the troops and restore America to a peacetime footing.

With this, plus the brilliant tactics of David Axelrod, Obama beat the immensely better known (and better funded) hawkish Hillary Clinton, beat the hawkish John McCain, and, in 2012, beat the hawkish Mitt Romney. If, as this columnist surmises, the electorate desires peace … and desires America to downshift from hyperpower to superpower … the predicate for smaller government … Rand Paul holds the trump card.

To become unstoppable, however, it is vital that Rand Paul capably define himself. As the Washington Post’s Aaron Blake observes:

The trouble with Paul is that no well-known labels seem to fit him well. While his dad, Ron Paul, is a pretty straight-line libertarian, that’s not really who the younger Paul is. He’s not an establishment Republican, a neo-conservative, an arch-conservative or a moderate Republican.

We still don’t know what label would be better than “tea party,” but it’s becoming clearer and clearer that this label doesn’t really fit.

Hello Aaron? This is not “the trouble.” This is the defining quality.

Paul, unlike politicians-as-usual, is working from fundamental axioms – axioms as in Jefferson’s “We hold these truths to be self-evident.” Most politicians work from postulates, “the notion that we are going to do it this way.” The “trouble” is with Washington’s outworn categories, not with Paul.

Who is Rand Paul? Pull off the blinders. He easily demystifies.

Memo to the Washington Post: you find Rand Paul “an enigma wrapped in a riddle” not because there is anything at all obscure about him. Washington is bewildered by its own obsolete taxonomy. Ease up on “left vs. right.” (It’s significant but much less so in the post-cold-war era than it once was.) Stop worrying about “libertarian vs. authoritarian.” (That matters, yet more as a means to an end than as an end in itself.)

Let’s make it easy for you, Washington.

Rand Paul is a classical liberal (holding certain human rights, such as the right to life, sacrosanct even from majority violation) republican (as in expecting the government to follow the people’s will rather than impose its will on the people a la Obamacare).

Rand Paul is a constitutional (as in explicitly referencing our national charter rather than vague platitudes) populist (as in, as fundamentally defined by public intellectual and former partner of this writer, now US Senate candidate from New Jersey, Jeffrey Bell, optimistic about people’s ability to manage their own affairs better than any elite can do for us).

Rand Paul is a radical (as in dealing from the fundamental axioms rather than mere postulates) humanitarian (committed to taking practical steps to support human flourishing, as befits a medical doctor who, as this column is being composed, is conducting charity eye surgeries in Guatemala).

Who is Rand Paul? If one understands the axioms from which Rand Paul is working he emerges not as an enigma but, rather, as a transformational figure. This has been noted by the Daily Caller‘s Matt Lewis writing in the UK Telegraph.

Who is Rand Paul? The penny is beginning to drop. Rand Paul: classical liberal republican, constitutional populist, and radical humanitarian. Whether or not he becomes president of the United States Rand Paul already is changing the conversation, powerfully, and transforming American politics.