The Power Of Drudge: A Little Civics Lesson For Janet Napolitano And Barack Obama 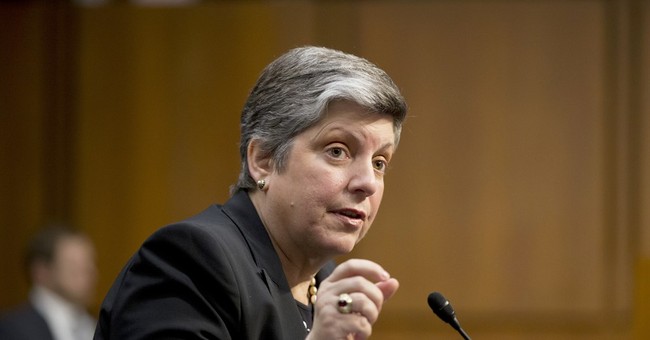 Janet Napolitano, Secretary of the Department of Homeland Security, is on the list of potential Democratic presidential candidates compiled by the extraordinarily astute Prez16.com . As a cabinet secretary (and as a potential, if dark horse, presidential nominee) Madame Secretary should refrain from slurring the Drudge Report, as recently she did, a slur Drudge, confidently, featured.

Drudge is no fan of Napolitano. He regularly tweaks her as “Big Sis” (presumably an allusion to George Orwell’s “Big Brother”). Drudge is one of the most powerful — and widely respected — forces in the news business today. It suggests a kind of, well, Obamaesque clueless snobbishness to disparage him.

The Washington Examiner reported an exchange between the astute Rep. Jeff Duncan, R-SC, and Secretary Napolitano at a recent Congressional hearing:

“You know, when Forbes magazine or Drudge or some reputable news sources start to repeat the numbers … the numbers cease to become Internet rumors, and they start having some credibility,” Duncan said questioning the “long delay” from the DHS to clarify the numbers.

“I will tell you, we found it so inherently unbelievable that statements would be made, it was hard to ascribe credibility to them,” Napolitano said, suppressing a bemused smile, adding that, “I don’t know if I’d put Forbes and Drudge in the same sentence.”

Two months ago this columnist reflected in one of his weekly commentaries for Forbes.com Opinion on a little-noticed Associated Press report stating that the DHS had issued purchase orders totaling 1.6 billion rounds of ammunition. This was a story that had been circulating around the Internet for some time. AP’s fine shoe-leather reporter checked it out with DHS.

DHS did not deny (or meaningfully clarify) the claim. Instead, its spokesperson attempted to justify it with a claim of doing it to get the best price. The DHS spokesperson, AP reported, stated that DHS expends 15 million rounds every year, “mostly on shooting ranges and in training exercises.” This wasn’t really reassuring. 1.6 billion divided by 15 million implies “strategic sourcing contracts” for … a 100 year supply. This simply did not add up.

This columnist dismissed the possibility of anything politically sinister in this acquisition, interpreting it as “bureaucrats gone wild.” The main point of the column dealt with the discrepancy between President Obama’s avowed hostility to guns … and his opportunity to take this as a “teachable moment” to lead by example by remanding the bulk of this purchase. (Why are guns in the hands of citizens objectionable while guns in the hands of a civilian government agency admirable?)

This could have been an opportunity for Mr. Obama to bring the left and right together. The Second Amendment protects the rights of the people, not the government. As the second-ranking right in the Bill of Rights it is designed to provide a restraint on government. And the federal government now is showing precious little restraint. Libertarians, and many conservatives, as well as (if not more than) progressives, would have no objection to the federal government doing a little (and, in the case of the Department of Homeland Security, a lot) of disarmament. For Mr. Obama to have directed scaling back these purchase orders would have been quite, well, disarming.

DHS buying hundreds of millions of bullets (many, according to comments to the column by readers far more erudite than this columnist, not typically used for target practice) seems akin to Michael Bloomberg living on 20-ounce soda pops and food rich in trans fats. If Obama really wanted to change politics as usual, rather than sneer at those with whom he disagrees, he had a perfect opportunity to unite the country by scaling back the DHS ammo purchase. It was an opportunity he did not take.

The Drudge Report picked up that column. Subsequently over 900,000 people viewed it. Readers provided almost 1,000 comments, mostly astute (even when ungenerous to this writer). Meanwhile, DHS was excruciatingly slow to clarify. Mrs. Napolitano, in the Congressional hearing, kindly “reminded the audience that the DHS typically uses 150 to 160 million ammunition rounds a year.”

That’s an order of magnitude larger than that originally given to the AP by its spokesperson. US News and World Report, in an April 29th report, concludes that “DHS officials testified last week it was only planning to buy up to 750 million.”

Only? While 750 million is a little less than half that originally reported by AP it is by no means out of scale. It is not inconsistent with “strategic sourcing” purchase orders totaling 1.6 billion (this columnist having viewed web postings credibly purporting to show such purchase orders) rounds. Ordering, even over time, 750 million rounds provides an equally compelling basis for this writer’s call for restraint.

Rather than justifying, with claims of incredulity, her agency’s laxness Secretary Napolitano really should apologize. The delay in responding to a national furor bespeaks a cavalier attitude toward the citizens she has been hired to protect. When the owners of Subway — the world’s largest fast food chain — saw a wordless Facebook posting of one of their “footlongs” measuring only 11 inches they immediately issued a public commitment to rectify this. And sent out a quality control memo to all of their 38,000 outlets.

DHS, by contrast, long ignored a popular outcry apparently of almost an order of magnitude larger. If Mr. Obama vaguely wonders why so much of the public so mistrusts the government there’s a little civics lesson for him, too, here. Mr. President? Contrast the laxness of a federal agency with the alacrity of Subway in responding to public opinion. Discuss.

Secretary Napolitano also ought to be deeply penitent for her backhanded slur of Drudge: “I don’t know if I’d put Forbes and Drudge in the same sentence.” This columnist is proud of the Forbes brand high editorial standards and justified reputation for integrity. Forbes’s integrity does not demean Matt Drudge, who is the Walter Winchell of this era. (Drudge’s famous fedora suggested a subtle homage to Winchell.)

Winchell was read by 50 million people a day, and 20 million listened to his radio show: “Good evening, Mr. and Mrs. America from border to border and coast to coast and all the ships at sea. Let’s go to press.” The Drudge Report self-reportedly received over (a characteristic) 1 billion pageviews in the past 31 days. More views than your bullets, Madame Secretary. The pen remains mightier than the sword.

According to the New York Times:

Mr. Drudge, once thought of as a hothouse flower of the Lewinsky scandal, is now more powerful in driving news than the half-billion folks on Facebook. (According to the study, Facebook accounted for 3.3 percent of the referrals to news sites, less than half as many as generated by The Drudge Report.)

“When you look at his influence, it cuts across all kind of sites, both traditional news outlets and online-only sites,” said Amy S. Mitchell, the deputy director of the Project for Excellence in Journalism …. “He was an early and powerful force in setting the news agenda and has somehow maintained that even as there has been a great deal of change in the way people get their news.”

The Times goes on to note that “15 percent of the traffic at WashingtonPost.com, which is not exactly a hotbed of Tea Party foment, comes from The Drudge Report.”

Madame Secretary? Even if you have, as Joseph Welch once famously asked another high government official, “at long last … no sense of decency,” do reconsider. As former Indiana governor Thomas Branigan famously observed to Eugene C. Pulliam, publisher of the Indianapolis News and Star, it is unwise to argue “with one who buys ink by the barrel.” Or, as

A little lesson in civics, and civility, for you, Madame Secretary.

And for you, with all due respect, Mr. President.