Rachel Marsden
|
Posted: May 13, 2020 12:01 AM
Share   Tweet
The opinions expressed by columnists are their own and do not necessarily represent the views of Townhall.com. 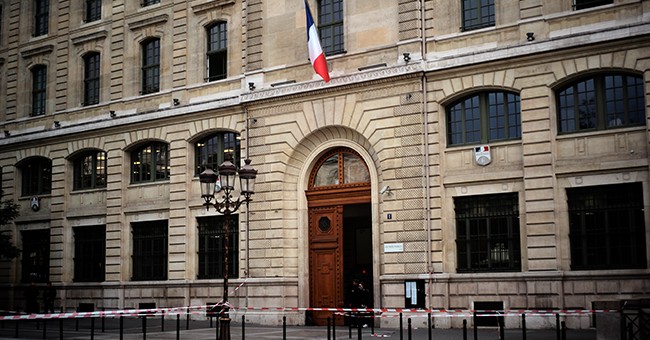 PARIS -- France's strict eight-week lockdown mercifully came to an end on May 11. No more permission slips just to go outside or back to work.

"The possibility of an emergency reconfinement must remain in people's minds and be anticipated by public authorities," Castex said.

You had one job, Mr. Deconfinement!

Good luck with any reconfinement plan. On the first day the government restored basic freedoms, Parisians piled onto subway trains with masks (now mandatory) that they hadn't waited for the government to procure. Good thing, too, because on the eve of the unlocking, there were far fewer than the 2 million "masks" promised by Paris officials. Scare quotes apply here because these masks resembled paper towels: single-use and ripped from a roll.

Commuters stood shoulder to shoulder despite stickers placed on the floor and seats instructing commuters to practice social distancing. Security guards were unable to stop them from piling on top of one another as the subway service ran at reduced capacity.

Hair salons stayed open later than usual to accommodate the shaggy onslaught, and there were reports of lines outside Starbucks, McDonald's and Zara clothing stores in several French cities.

None of this is surprising. In contemporary Russia, remnants of authoritarian communism are largely ignored. On a recent visit to Moscow, I went to a public swimming pool. Under Soviet law, such a visit would have required medical authorization, or "spravka." Instead, an on-site doctor chatted me up for a few minutes before sending me on my way with a smile.

Such is the ultimate fate of overbearing government measures. Not that perpetual lockdowns won't have their cheerleaders.

Two types of people have emerged from this global fiasco. There are those who are exasperated by government control over their lives and livelihoods. They trust their own observations about the reality of the viral threat rather than believing governments that lie to them constantly. And then there are the Coronasheviks -- the modern-day version of the Bolshevik enablers who ushered big-government authoritarian Vladimir Lenin into power in Russia a century ago.

These people apparently have the luxury of sitting at home. Something other than their own productivity is apparently subsidizing their sanctimonious selves. They spend their days monitoring news and social media coverage of the unlocking from their couch, wagging their fingers and finking on those who stray from government diktats about social distancing. They accuse the people going about their normal lives of being purveyors of death.

Footage of people in a park enjoying some sun is enough to send the Coronasheviks into orbit. They flip out at the sight of joggers, whom they view as little more than homicidal disease vectors. Their instinct is to insist that the state crack down with arrests.

These people also tend to lecture others about how unlocking prioritizes economics over health. Just like old-school communists, they insist that people who oppose the continued repression of freedoms are useful idiots of the wealthy.

Their world is black and white -- workers versus big business. Lost in their worldview are the people who rely on businesses both large and small for their own freedom.

The alternative to commerce is the kind of universal income that's being distributed by governments during this crisis under the pretext of "relief." It's a relatively measly amount that disincentivizes human initiative while locking every citizen whose livelihood has been stolen in a straitjacket of poverty.

How long do the Coronasheviks think that the health care system -- which they've been cheering from their balconies during this fiasco like they're at a North Korean military parade -- could survive if it were as dependent on government as everyone else in a communist-style system?

At least leftist proponents of nanny-state government are ideologically consistent with their support of indefinite lockdowns and sanitary authoritarianism. What's the excuse of conservative lockdown supporters? In the U.S., President Donald Trump has resisted embracing a lockdown logic from the outset, so those who dislike Trump are willing to abandon any concern for the erosion of basic civil liberties even if they're longtime advocates of free-market and limited-government principles.

This isn't a choice of whether to support Trump, or a choice between working and staying home. Above all, we face a choice between our freedom, for which our ancestors gave their lives, and resurrecting an ideology that was long ago relegated to the dustbin of history.