Rachel Marsden
|
Posted: Sep 18, 2019 12:01 AM
Share   Tweet
The opinions expressed by columnists are their own and do not necessarily represent the views of Townhall.com. 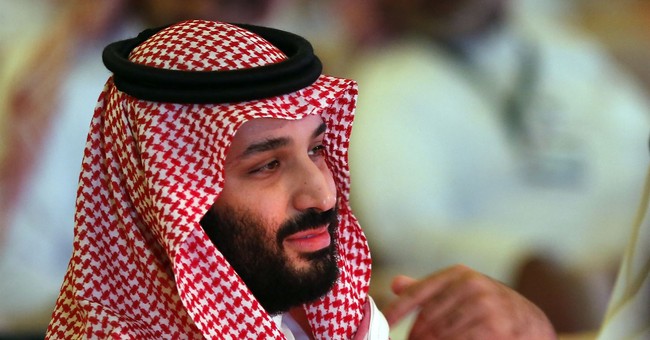 PARIS -- America's top source of imported oil (43 percent of it) is Canada. As fellow NATO members, an attack on Canada would be considered an attack on the United States, and a response could include the use of armed force. As with any declaration of war, this would require congressional approval, but the bottom line is that Canada is the very definition of a U.S. ally in diplomatic terms.

The same doesn't hold true for America's second-largest oil supplier, Saudi Arabia (9 percent). There is no agreement or framework for the U.S. to respond to an attack on Saudi soil, let alone any obligation to do so. The Saudis are commonly referred to as American allies, even though they really aren't in any official sense. They do, however, purchase U.S. weapons and represent significant oil imports, so they are trading partners and commercial allies. That's about as far as it goes.

So when a Saudi oil facility was attacked from the air over the weekend, knocking out roughly half of its oil production capacity, U.S. President Donald Trump's knee-jerk response (on Twitter, of course) was troubling.

"Saudi Arabia oil supply was attacked," Trump tweeted. "There is reason to believe that we know the culprit, are locked and loaded depending on verification, but are waiting to hear from the Kingdom as to who they believe was the cause of this attack, and under what terms we would proceed!"

First of all, why is there only "reason to believe" that U.S. officials know who the culprit is when the region in question is one of the most surveilled on the planet? We should know who did it, right down to the precise trajectory of the attack. Let's see the evidence.

And why would America, with all its spy technology and resources, be "waiting to hear" from the Saudis about who they decide to blame? Saudi Arabia already tried to get the U.S. to do its dirty work in Syria by offering to pay the bill for U.S. troops to oust Syrian President Bashar al-Assad. Why should the Saudis be trusted not to drag American troops into another pointless foreign war that primarily benefits them?

Regardless of who's responsible for the attack on the oil facilities, the Saudis shouldn't be dictating how America should "proceed." Saudi Arabia isn't America's problem.

For all the weapons that the U.S. has sold Saudi Arabia over the years, the Saudis should be capable of handling the situation alone. Their American-made Patriot missile systems should have been able to deflect an attack. Russian President Vladimir Putin even joked about it at a press conference with Iranian President Hassan Rouhani and Turkish President Recep Tayyip Erdogan to discuss the conflict in Syria.

"[The Saudis] need to make one clever decision as Iran did, buying our S-300, and as Mr. Erdogan did by deciding to buy the most advanced S-400 Triumph air defense systems from Russia," Putin said. "These kinds of systems are capable of defending any kind of infrastructure in Saudi Arabia from any kind of attack."

America has flooded Saudi Arabia with weapons and military assistance. Placing a missile system in the paws of a panda bear would have been more productive. The Saudis have been employing America's finest weaponry to fight the pro-Iranian Houthis for control of neighboring Yemen and have been losing to guys in flip-flops. It's so embarrassing that American defense manufacturers should sue the Saudis for defaming their products.

According to a leaked French military intelligence report, although U.S. drones provide the Royal Saudi Air Force with targeting support, the Saudis still aren't very good at actually hitting the targets. No kidding -- the war in Yemen has become renowned for its astronomical number of civilian casualties.

So the U.S.-backed Saudis are getting their behinds handed to them by Iranian-backed Houthis in Yemen, and Trump has repeatedly turned a blind eye to it, even vetoing a congressional ban on weapons sales for Saudi use in Yemen.

The Yemen war has been treated like an opportunity to make bank on the sale of weapons and military assistance to the Saudis without any cost to America's bottom line. Now that the Houthis have claimed responsibility for this latest attack on Saudi soil, the cost is evident. The bill has finally come due for U.S. involvement, and global oil prices have spiked. The lesson in this fiasco is that war doesn't occur in a vacuum. Newton's Third Law applies to global conflict: For every action, there is an equal and opposite reaction.

The best thing Trump can do is cut off all military assistance and arms sales to the Saudis and focus on what he can control to America's benefit: total North American energy independence.