France's Soul Burns During a Time of Deep Public Distrust

Rachel Marsden
|
Posted: Apr 17, 2019 12:01 AM
Share   Tweet
The opinions expressed by columnists are their own and do not necessarily represent the views of Townhall.com. 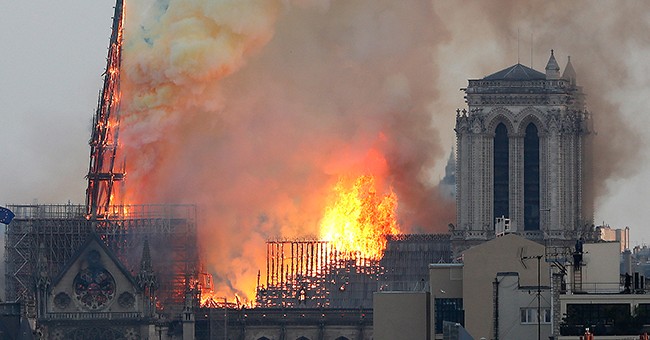 PARIS -- The soul of France went up in flames Monday, as Notre Dame de Paris cathedral was swallowed by a blaze just a few days before Good Friday and Easter Sunday. Notre Dame is much more than just a church -- it's the epicenter of the history and identity of France, and never more critical as a symbol than right now.

Notre Dame is where Napoleon Bonaparte was crowned emperor on Dec. 2, 1804, at a time when France was a world power and he was conquering the globe on its behalf. It's also where, exactly a year later, after winning the Battle of Austerlitz against the Russian and Austrian armies, he ordered the enemy's captured battle flags to be put on display. Right in front of the cathedral is "Point Zero," from which all the national roads leaving Paris emanate.

Today, Notre Dame represents the cultural and historical roots of a people who feel adrift in a globalized world where they are expected to melt into a European supra-national identity while also acquiescing to a migratory tsunami and its accompanying cultural heterogeneity. The cathedral is a mainstay in a country that has watched as other crown jewels symbolic of French savoir faire have been absorbed by foreign competitors.

The threats aren't just external. Paris has been a powder keg since last fall, when the "yellow vest" movement began -- middle- and working-class French taking to the streets to protest a carbon tax increase that raised the cost of fuel. The French government's attempt to shake down workers for a few more centimes under the pretext of some abstract scheme while so many were already struggling to make ends meet was seen as the last straw.

Saturday yellow vest protests have become a weekly event ever since. In January, French President Emmanuel Macron announced a "great debate," with town halls across the country, in an attempt to appease protestors. It hasn't worked. Macron was supposed to give a televised address about the yellow vests in the moments after the Notre Dame fire had broken out. He postponed. Theoretically, TV networks have ways to handle simultaneous breaking news stories. But perhaps a split screen showing Notre Dame going up in flames alongside Macron going up in flames by spewing more tone-deaf institutional rhetoric to viscerally fed-up French citizens would have been too much.

French elites are fluent in the language of appeasement. They're taught this oratory art in all the highly regarded academies from which French presidents ascend to power. They're experts in high-level rhetoric -- mostly as cover for non-action or for bad action. It may be the result of a generational shift, or simply the fact that people have been waiting far too long for unfulfilled promises to materialize as their situations worsen, but multiple polls now show that the French have barely more than zero faith in their leaders.

It's precisely into this breach -- this total lack of faith in authority -- that Notre Dame's toppled steeple has fallen. Macron and the French government are now at a crossroads.

As of Tuesday, all we knew about the cause of the blaze was that a police investigation had been opened for "involuntary destruction by fire." This labeling will no doubt spark another fire under those convinced that the authorities are being less than transparent, particularly after the Saint-Sulpice cathedral, located not even a mile away from Notre Dame, was gutted by fire just last month. At the time, a police source told the French newspaper Le Parisien: "The fire started from a pile of clothes, and clothes do not ignite alone."

In February, the same newspaper reported a string of at least five attacks on Catholic churches in France in a single week. Father Pierre-Herve Grosjean of the diocese of Versailles wrote on Twitter: "Of all the violence that is shaking our society right now, there are also these: the desecration of our churches, many these days." That was on Feb. 10.

It's entirely possible that Notre Dame, the crown jewel of Catholicism, simply caught fire by some fluke accident a few days before one of the most symbolically important periods in the Catholic faith. It's also entirely in the government's best interest that this indeed be the case, given the current tension between the public and French authorities.