French Presidential Candidate Macron Has Only One Major Flaw

Rachel Marsden
|
Posted: Apr 26, 2017 12:01 AM
Share   Tweet
The opinions expressed by columnists are their own and do not necessarily represent the views of Townhall.com. 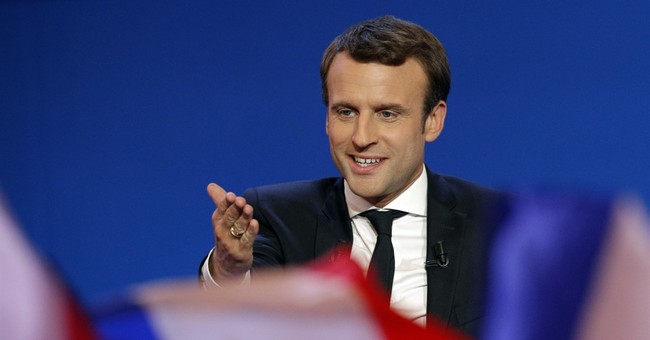 PARIS -- Independent, pragmatic, centrist, Atlantist, globalist: All are words that have been used to describe 39-year old Emmanuel Macron, who, barring the totally unforeseen, will become the next president of France after a May 7 runoff vote against populist, protectionist candidate Marine Le Pen.

Macron won the first round of presidential elections last weekend, receiving 23.9 percent of the vote. Le Pen also advanced to the runoff with 21.4 percent support.

While the more free-market Macron is stronger on the economic front than nanny-state defender Le Pen, his statements on immigration and integration are worrisome.

There's a troubling security problem in France. Terror attacks have claimed hundreds of lives over the past few years. The situation is palpably worse than when I moved to Paris a decade ago. Just last week, I did a television interview at a rooftop studio on the Champs-Elysees, where only hours later a radical Islamic terrorist opened fire below on a police vehicle, killing one officer and injuring two others.

According to a poll earlier this year by the Chatham House Royal Institute of International Affairs, 61 percent of French agreed with this statement: "All further migration from mainly Muslim countries should be stopped." According to an Ipsos poll taken last year, only 11 percent of the French consider immigration to have had a positive impact on their country.

The National Front's Le Pen has centered her campaign on immigration, sovereignty and national identity. It likely will not be enough. Most polls show that the French are more concerned about the country's economic and underemployment problems than the immigration problem. Unfortunately, this election forces voters to choose between problems. (The "establishment vs. anti-establishment" issue has disappeared, since both candidates are established political figures leading non-establishment parties.)

So Le Pen has bet it all on a protectionist immigration focus and risks losing with a nanny-state leftist economic platform.

Macron wants to shorten processing times for refugees to eight weeks and to make foreign development aid contingent on countries' acceptance of deportees who fail to qualify for residency in the European Union. Macron said an in an interview that he's against quotas, calling them "impossible to control," apparently not realizing that countries such as Canada have managed quotas just fine.

"Contrary to what some say, we are not today confronted with a wave of immigration," Macron said.

Excusez-moi, but France absolutely has an immigration problem. Does Macron have a vision problem?

Macron redefines the problem as one of integration. "When we know how to integrate them, to train them, women and men renew our society, give it a new impetus, the impulses of inventiveness and innovation," he said.

When Macron worked as an investment banker for Rothschild, did the company hire anyone who showed up at the door and then throw money at them, hoping that innovation might spring forth? And when Macron was accepted to France's elite National Administration School, were his fellow classmates chosen at random and then trained at great taxpayer cost?

Not a chance. So why does Macron insist on a low bar for French immigration?

As an immigrant to France myself, Mr. Macron, allow me to appeal to your far more reasonable economic sense: You can't have both a nanny state and open borders. The kind of immigrants allowed into France should be unwilling to take a single centime from the government in social assistance, training or education. They should speak fluent French and be ready to work and contribute the minute they set foot on French soil. You want innovation? Import it. Set the quota sky-high for entrepreneurs, innovators and the self-employed who want to come to France.

Mr. Macron, you're kidding yourself if you think that most immigrants are going to quickly assimilate thanks to taxpayer largesse and your own volition. You seem like a man with high standards, so why the unwillingness to impose them on aspiring immigrants for the benefit of France's social cohesion and security?

It's strange that someone like Macron who has climbed to great heights in a meritocratic environment by virtue of hard work and persistence refuses to ask that others do the same. Entrance requirements aren't inhumane or cruel -- they're a means of preservation. France deserves nothing less.