Trump Guy-talk Controversy a Distraction From What Really Matters

Rachel Marsden
|
Posted: Oct 12, 2016 12:01 AM
Share   Tweet
The opinions expressed by columnists are their own and do not necessarily represent the views of Townhall.com. 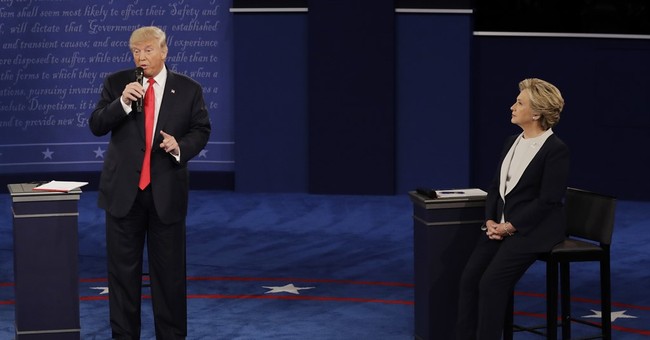 PARIS -- If you're among the more than 100 million people on this planet who purchased and was titillated by "Fifty Shades of Grey," the best-selling novel about a sadomasochistic sexual relationship between a wealthy young businessman and a college senior, then the second U.S. presidential debate was likely right up your alley. If you were looking for some depth and substance, then you were out of luck.

Co-moderator Anderson Cooper of CNN wasted little time asking Republican Donald Trump about a leaked tape from 2005, recorded prior to an on-air "Access Hollywood" segment in the company of host (and George W. Bush cousin) Billy Bush. Trump is heard engaging in the same kind of talk that I've heard in rugby clubhouses, among military-veteran pals and even while working as a co-host at the Fox News Channel.

If we're going to start disqualifying guys for talking like this among other guys, then we're going to have to make some awfully deep cuts in almost every important facet of society. We'd also be getting uncomfortably close to the dystopian measure of sanctioning thought crime, just like in the Stephen Spielberg movie "Minority Report," in which Tom Cruise plays the head of a police task force that stops crime before it's committed.

On the tape, Trump is heard describing, in blunt terms, what people in show business can get away with. And he wasn't incorrect.

What matters more to me is how Trump treats the women in his company. In a CNN interview last year, Trump attorney Michael Cohen said that female executives outnumber male executives at the Trump Organization, and females earn more than their male counterparts who hold comparable positions. That speaks to Trump's respect for the women in his company and their abilities.

During the debate, the well-known sexual shenanigans of Democratic nominee Hillary Clinton's husband, Bill Clinton, were also rehashed. Three women who had accused the former president of sexual misconduct attended the debate, as did Bill himself, which made for an interesting dynamic.

Cooper and co-moderator Martha Raddatz of ABC News were responsible for framing the discussion, and they accommodated whatever sexual salaciousness would generate the most media buzz. If you can make politics about interpersonal drama and sex, then you don't have to deal with complex and nuanced policy implications. Ultimately, all of this serves no one. Women have far more important things to worry about, and the debate didn't give them the chance to ascertain how the candidates would deal with critical issues that impact women directly.

For example, there is heated debate in Europe about whether the wave of immigrants from the Middle East is posing a safety risk for women. In Germany, more than 1,000 women across the country were sexually assaulted on New Year's Eve, according to a leaked police document, and about half of the suspects were foreign nationals who had recently arrived in the country. Earlier this year, a Swedish newspaper reported police had covered up reports of girls being sexually harassed by immigrant youths at a music festival in mid-2015. It's a topic that most politicians prefer to avoid. After all, it's tough to keep flooding the country with cheap labor if citizens start pushing back in defense of women.

Hillary Clinton had the audacity to call German Chancellor Angela Merkel, who's chiefly responsible for the European immigration crisis, her favorite world leader, adding that "her bravery in the face of the refugee crisis is something that I am impressed by."

Clinton's actions as secretary of state contributed to failed military campaigns in Libya and Syria, leading to the creation of the Islamic State, whose acts of terrorism have taken lives on both sides of the Atlantic Ocean.

The Clinton Foundation accepted contributions from Saudi Arabia while knowing that the Saudis supported the Islamic State. An email that Clinton sent to her campaign chairman, John Podesta, on Aug. 17, 2014, (and was published by WikiLeaks) makes it clear that she knew about this link. "We need to use our diplomatic and more traditional intelligence assets to bring pressure on the governments of Qatar and Saudi Arabia, which are providing clandestine financial and logistic support to ISIL and other radical Sunni groups in the region," Clinton wrote.

I couldn't care less if Trump's mouth needs an occasional soap wash. What matters far more is that Trump has unwavering clarity of vision and purpose, can identify danger and is action-oriented in its elimination. Those attributes could benefit not just women, but everyone.