Rachel Marsden
|
Posted: Mar 08, 2016 5:39 PM
Share   Tweet
The opinions expressed by columnists are their own and do not necessarily represent the views of Townhall.com. 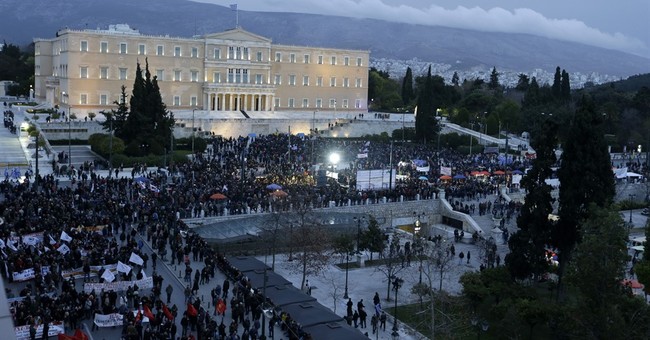 Walking through the Greek capital on a sunny afternoon, it's not readily apparent to the casual observer that this country of stunning natural beauty is grappling with serious man-made crises. A clash of opposites -- old and new, costly and inexpensive, natives and immigrants, protests and celebrations -- gives the place a simultaneously chill and slightly wild vibe. There's a sense from talking to people that crisis is the new normal, and that many are adapting to a situation that should have long ago led to revolt.

People here don't revolt, they simply move. The eurozone's provisions for the free movement of people allows Greek citizens that opportunity. The unemployment rate in Greece as of November was 24.6 percent. In other words, of the people who are still bothering to look for work, a quarter of them can't find any. So what do they do? The younger ones leave for other countries to seek employment or training. Others stay and live with family or rely on government support and hope that things eventually turn around.

While globalization allows Greeks to escape if they so choose, it has also been the catalyst for the country's problems.

Greece was doing just fine when its governmental and societal institutions operated in a vacuum and there was nothing competing with them. The state was the largest employer, people could retire with a pension as early as age 50, unions held incredible power, and everything was controlled by a nepotistic establishment elite.

But then the world got smaller due to technology and trade, borders became less of an obstacle, and the economic engine of this massive welfare state expatriated itself. Thousands of Greek companies have moved to Bulgaria and elsewhere.

Meanwhile, Greece is on the front line of an influx of migrants fleeing from the war-torn Middle East, adding more social welfare cases to an already overburdened system.

Even among all these concerns, there was another preoccupation that kept coming up among people I met: Donald Trump. Many Greeks don't know what to make of him or his popularity in America. Nor do they have a very accurate grasp of his positions.

One gentleman insisted repeatedly that Trump "likes war," despite the Republican front-runner's overwhelmingly non-interventionist foreign policy positions. Another kept repeating that Trump is "dangerous," referring to his direct manner of speech. What's dangerous, I explained, is when only platitudes are allowed in public discourse, even as things fall apart.

Trump-style tough talk is the flashing sign at the exit ramp to Disasterville. Diplomatic niceties are a luxury that go by the wayside when the voting public is fed up. And if there isn't a Trump-style leader to champion those frustrations in an acceptably democratic context, then populist movements of the sort that we've seen in Europe recently fill that gap.

One Greek woman compared Trump to former Italian Prime Minister Silvio Berlusconi, a billionaire businessman who served four terms. "At least we Europeans are ahead of the Americans on something," she said, smiling.

But Trump represents something far more important that seems to escape everyone here: the interests of the individual over those of the establishment. In discussions about Greece's problems, very rarely are the concepts of personal power and individual responsibility ever evoked, but these concepts might be the only hope of establishing long-term viability for this country.

Granted, this would require a massive cultural shift, coupled with a complete revamping of the country's institutions. Greeks would have to be taught at a young age about entrepreneurship and the freedom to create and innovate on their own -- and Greek government would have to clear the path for them to do that. There has to be a change in the national mindset, and it must start with the government itself. Rather than feeling obligated to support citizens from cradle to grave, Greek leadership should grant citizens more responsibility for taking care of themselves.

Growth isn't going to come from some kind of national or European directive that's shoved down people's throats by the political class. The individual is the unit that generates value.

Why hasn't this been taught here? It may be that the system is so entrenched that no one has considered the alternative as an option. It may also be that the concept of individual self-sufficiency would dilute the power of the ruling elites. It's no wonder, then, that many Greeks consider entrepreneur Donald Trump's brand of independence to be so dangerous.