Rachel Marsden
|
Posted: Feb 17, 2016 12:01 AM
Share   Tweet
The opinions expressed by columnists are their own and do not necessarily represent the views of Townhall.com. 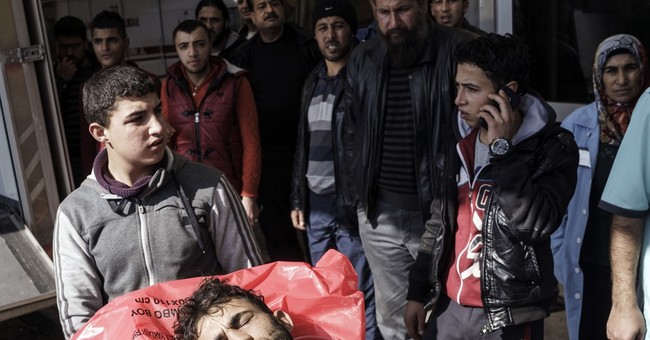 What if Russia and the Syrian government succeed in wiping out the Islamic State? It's a distinct possibility as the Syrian army closes in on Raqqa, the stronghold of the terror group's so-called caliphate.

If such a victory were to occur, a critical narrative would die. Which narrative? Well, let's ask the establishment candidates of the Democratic and Republican parties.

Hillary Clinton said during the latest Democratic debate that Russia "has not gone after ISIS or any of the other terrorist groups." Really? That's exactly what Russia has been doing in the Middle East. You destabilized the region; Russia has been trying to clean up the mess.

We've already seen how Hillary "Benghazi" Clinton's penchant for misplaced focus can lead to disastrous consequences on the terrorism front. She was secretary of state when the Syrian rebels morphed into ISIS right under her nose, and also when a group of Western-backed rebels deposed Muammar Gaddafi in Libya.

There were whispers from the onset here in French intelligence circles that the Libyan rebels were jihadists who might end up being worse than the deposed regime if ever they had the chance to fill a power vacuum. Fawzi Boukatef, leader of the anti-Gaddafi rebels in the First Battle of Benghazi in February 2011, admitted in an interview for a French documentary that there were indeed jihadists fighting alongside the rebels. (He qualified them as Libyans first and foremost who fought under a single flag.)

When candidates on both sides of the aisle object to Russia's bombing of rebel groups known to be full of jihadists, you have to wonder if they're demonstrating their own ignorance or doing the bidding of others.

Like Clinton, Bush expressed concern about the Syrian rebels -- only "four or five" of whom remain from a $500 million program, according to General Lloyd Austin, the head of U.S. Central Command, who dropped that little nugget of information in testimony before the Senate Armed Services Committee last September.

"(Russia is) not even attempting to take out ISIS," Bush said. "They're attacking the troops that we're supporting. We need to create a coalition, (a) Sunni-led coalition on the ground with our special operators to destroy ISIS and bring about stability. And you can't do that with Assad in power."

Ah, so now those five remaining rebels and assorted jihadists have spontaneously been upgraded to "troops." And only the Sunnis are allowed to sweep through the Middle East, led by the Saudis and the Qataris, of course -- the same two countries that gave the jihadists the weapons and resources they needed to grow into the Islamic State. Asking the Saudis to fix this problem is like giving an arsonist a job as a fireman.

Bush's "Sunni-led coalition" advice would result in a full-on proxy war in the Middle East, with Russia, Syria and Iran on one side, and the U.S. and its allies on the other, along with Saudi Arabia. When Russian Prime Minister Dmitry Medvedev was asked about the possibility of Saudi ground troops in Syria, he told Germany's Handelsblatt newspaper: "The Americans and our Arab partners must consider whether or not they want a permanent war."

That's a question that should be put to American voters.

During the Republican debate in South Carolina, a moderator asked the candidates to list questions they would ask on their first day in the situation room if they were elected.

"What are we doing in the Middle East with the combination of the Sunni-Shia conflict driven by the Shia arc that Iran is now trying to establish in the Middle East, (and) also the growing threat of ISIS?" Sen. Marco Rubio responded.

Again, why all the concern about the Iran-Russia-Syria axis when they are the ones closest to reclaiming Raqqa and defeating the Islamic State? Why this forced narrative about Iran trying to take over the region when at worst it's simply exploiting an opportunity presented by the Russian-led Middle East cleanup coalition in the wake of the West's regime-change mess?

It's interesting that the candidates supported by the deep-pocketed establishment are all singing from the same hymn book, regardless of party affiliation. It's just further evidence that this election should be about the purge of special-interest bribery -- a concern that transcends left-right ideology.

Faced with the very real possibility that Russia, Iran and Syria could end up being credited with defeating the Islamic State, there are a lot of influential people using their ventriloquism skills to have their candidates mindlessly squawk like there's no tomorrow.