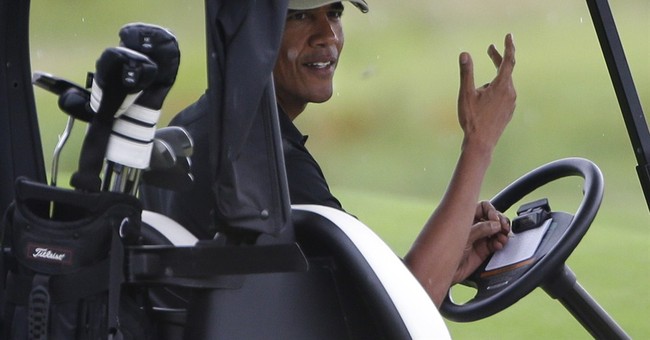 President Obama has demonstrated leadership qualities ranging from poor to nonexistent. But is a president who lacks visible leadership qualities really such a bad thing? Or is he lazy like a fox? A lack of leadership -- whether deliberate or accidental -- can have a surprising upside, as none other than the French have historically exemplified. (And no, I'm not being facetious.)

As a conservative whose heart leans firmly right, I would have thought the idea crazy until I moved to France four years ago, gaining insight into the mysterious French mind-set. I came to realize that there is a more covert way to get things done without placing your neck onto the chopping block. It may not constitute leadership, but it can be just as effective. "Going in with the back of the spoon," as the French call it.

In the outster of Libyan dictator Muammar Gaddafi, Obama let NATO allies run the operation along with contractors, proudly taking credit for the success of the mission while bragging that it was executed without any official American boots on the ground. Against Bashar al-Assad in Syria, Obama seems satisfied to let Turkey do the staging, let Qatar and Saudi Arabia do the funding, and let eventual al-Qaeda drone bait do the fighting against a swamp of unsavory opponents, including Iranian proxies, the Al-Nusra Front (Syrian al-Qaeda) and pro-Assad forces.

Obama recently said of the bloody situation in Egypt: "We want Egypt to succeed. We want a peaceful, democratic, prosperous Egypt. That's our interest. But to achieve that, the Egyptians are going to have to do the work." Meanwhile, what the world is seeing is not merely an indiscriminate bloodbath, but rather, as Obama presumably understands, a crackdown on Islamic extremists in the Muslim Brotherhood by the Egyptian military, which has traditionally enjoyed the support of the people and America's financial generosity.

What does all this have to do with the French? There's a reason why French power is universally considered a "hard target" in espionage, along with the more obviously difficult-to-penetrate North Korea, Iran, Russia and China -- and it has a lot to do with the covert nature of French behavior, including leadership style (or lack thereof). The problem with this style is that it's not very comforting to those who want to know what's going on. In Obama's case, this means the American people.

But the flipside is that when the average American can decipher what's happening, so can the enemy. While it might be comforting for everyone to feel they're on the same page, it's also comforting to the opponent. American WWII General George Patton famously captured the feeling of discomfort: "I would rather have a German division in front of me than a French one behind me."

The history of French action in recent decades is largely one of discreet operations under massive smokescreens, with the French appearing inept, unreliable or simply benign.

President Ronald Reagan was shocked when Socialist French President Francois Mitterrand -- whom Reagan feared would include Communists in his administration -- offered up intelligence on Communist infiltration of American research and development, gleaned from France's Operation Farewell.

A French political friend of mine likes to joke that former French President Jacques Chirac spoke more informally with Saddam Hussein than he did with his own wife, Bernadette, even as his government was participating in discussions of Saddam's ouster at the United Nations.

Yet getting discreetly down and dirty does comes with increased benefits -- like access. As the French newspaper Le Monde reported in 2007, a highly classified DGSE (French foreign intelligence) memo in January 2001 indicated Osama bin Laden's intention to hijack an American airplane: "During the month of October 2000, Osama bin Laden attended a meeting in Afghanistan during which the decision in principle to conduct this operation was sustained." Would this intelligence, obtained from Muslim-majority Uzbekistan's intelligence service, have existed had the French been unambiguously more hostile toward Islam?

Even the details of France's recent Operation Serval in Mali -- comparatively public and universally regarded as an exemplary military victory -- largely remained off French President Francois Hollande's lips in public between the mid-January incursion announcement and the late-May television appearance during which he rightfully called the operation a success and discussed it openly.

Reagan authorized the same kind of bamboozling in Afghanistan during the Cold War while pretending to know nothing about it -- ultimately to America's benefit.

The French style is certainly less comforting than the more overt leadership of Obama's predecessor, George W. Bush, who called out America's problems by name -- "Axis of Evil" being one example -- and explained aloud to the world exactly what his plans were. Personally, I prefer that straightforward and honest style, but it's hard not to acknowledge the merits of acting like a smoke machine for the fog of war, as Obama is doing. At least until it's time for him to claim credit for the spoils of victory.