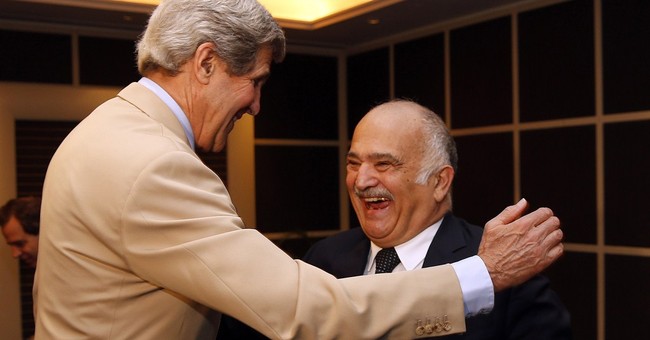 PARIS -- The war in Syria is Russia's to lose. Arguably, it could very well end up being Russia's biggest test as a player on the world stage since the end of the Cold War.

U.S. Secretary of State John Kerry and his Russian counterpart, Sergey Lavrov, are meeting here in Paris this week to discuss the possibility of discussions. The topic of whether to allow Iran at the adults' negotiating table with the nonplastic cutlery is sure to come up, further delaying any seriousness to the notion of ending the conflict before all the Islamists involved annihilate each other. Not that America would mind.

Kerry will likely end up filling the bilateral meeting room with so much hot air that its ambient temperature increases by 10 degrees -- and that's exactly what would suit America's interests, because an actual resolution to the Syrian situation doesn't bring America any added value. Lavrov should realize that the onus this time isn't on America but rather on Russia.

The outcome in Syria -- everything from regional stability to human rights -- is largely dependent on Russia's willingness to lead. No doubt it's a strange angle, since whenever any kind of civil war breaks out anywhere on earth, it's always Captain America who is expected to swoop down and rescue the locals. From Rwanda to Syria, whenever America isn't intervening militarily, it's faulted for not caring. Then, when it does intervene, it's promptly accused of having ulterior motives and beaten over the head with the welcome mat. The intervention itself is then leveraged to justify, with cries of "blowback," any future horrendous local acts with even the most tenuous connection to the American intervention.

It's now Russia's turn to pick up that mantle in Syria -- particularly since Russia wants the conflict to end for a variety of reasons, from arms-trade frustration in the region to a flood of rabid and unaccountable Islamists into their backyard in the Caucasus.

For years we've been bombarded with complaints about how America is cutting and running in Afghanistan, blowing town and leaving the place entirely to the Taliban after arming the Mujahideen to fight the Soviets during the Reagan Era. Then, well, 9/11 happened. America has long been beaten over the head with that narrative. Criticism for not sticking around to mop up the mess isn't completely illegitimate, but fine -- now it's time for Russia to show America how it's done, if it's up to the task.

As ubiquitous as the Syrian civil war may seem in the Western media, it really isn't America's war, at least not in the sense that its resolution represents any significant geopolitical gains. It certainly isn't about U.S. energy policy, as America is becoming less dependent on foreign supplies. And America's primary regional ally, Israel, is more than adequately equipped to look after itself and keep the mess contained.

The Syrian war really isn't Iran's strategic problem or that of its Hezbollah proxies (both fighting on behalf of Syrian President Bashar Assad), either. Iran is the insufferable trophy wife of the global village: not too swift, no real aim in life beyond petty skirmishes, mouthy and obnoxious, and would have no suitors or friends if it weren't swimming in inadvertent wealth (oil). And the war certainly isn't the problem of the various other ragtag Islamic groups that are basically fighting for whichever side will toss them a weapon. It isn't even Syria's war, since precisely no one likes the guy in charge, and he's entirely dependent on Russian arms to keep his head above water.

If the Syrian people have any ally in this struggle for their future, it's Russia's role to accept or refuse.

Russia has long been fostering trade and diplomatic relationships with the Islamic world, taking advantage of a vacuum willingly left by Western nations. All of the Islamic belligerents in Syria have a Russian connection, and the conflict is squarely within Russia's sphere. Russia is supposed to be the Islamist Whisperer. We thought you had these guys under control, Russia. Here's your chance to show America how saving the world and defending human rights is done.

Russia shouldn't be calling on John Kerry to do anything, but rather walking into talks with commitments in hand from all the other players, particularly Iran and Syria, for Russia to negotiate on their behalf. That's the role for which Russia has long positioned itself -- that of reasonable, rational mediator between Islam and the West -- isn't it? Well, it's showtime.