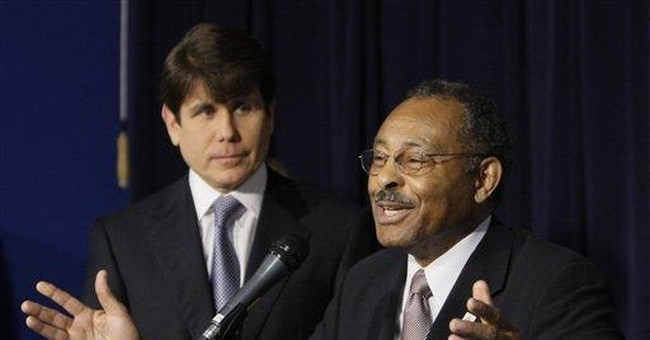 Barack Obama and the media: The marathon makeout session between President Barack Obama and the mainstream media will continue – in Bill Clinton’s former hotel room, better known as the Oval Office. Obama will shrug off any responsibilities that Clinton’s “third term” appointees can’t contend with, and everyone will be expected to understand that it’s still all George Bush’s fault. At the end of the year, Obama will emerge as the President who aged the least during his first year in office.

Israel and Palestine (featuring Hillary Clinton): It would appear that the world’s most boring and predictable soap opera will be back in prime-time programming again this year. The tedious tale of two countries whose Wikipedia article length – much like Paris Hilton’s - is proportionate only to the amount of drama they cause. It will cause many headaches for new Secretary of State Hillary Clinton and the Third Battalion of Desk Jockeys at the United Nations, as they try to figure out how to stop the world’s longest war using mere words. But really, here’s all Clinton needs to say: “Hey Muzzies, knock it off. If one more rocket ventures off your turf, I don’t care if you get turned into a parking lot.” Then we all need to let them duke it out once and for all like a couple of ferrets in heat.

Vaclav Klaus does the EU: The rotating six month European Union presidency is about to be passed to the Czech President – a man who has repeatedly called manmade global warming a “myth” and a “modern counterpart to communism”. When asked if it was “ruining our planet”, he replied, “Perhaps only Mr. Al Gore may be saying something along these lines: a sane person can't.” And now, just as the EU is putting the final touches on an utterly insane waste-of-time plan to “prevent climate change”, Klaus is going to bust through the wall of that party like Kool-Aid Man. And it’s going to be a riot.

Global warming: Here we go again. There’s snow in Las Vegas and a coast-to-coast freeze this winter, and we’re told it’s proof of “global warming”. There’s no arguing with that kind of iron-clad logic. You just can’t disprove a something that doesn’t exist. So I think that this year, global warming will rightfully become a foil for all two conservative stand-up comedians who don’t care if they ever work in Hollywood again. The rest of us will have to put up with it and, if we’re smart, will apply it as logically as liberal twits do. Example: “Sorry I rear-ended your car. You know, friggin’ global warming, man!” or, “I’m sorry my drunken friend threw up on your shoes at the party last night. This global warming thing, it’s really getting to him.”

Illinois Governor Rod “Chucky Doll” Blagojevich: Obama and the Democrats want Blago/Chucky to stop chewing the scenery and disappear up an orifice of his choosing – all because he has been charged with allegedly trying to sell Obama’s vacant Senate seat in exchange for cold hard cash, rather than a lifetime of strategic rear-end kissing like in other democracies like Canada and England where upper chamber members are appointed. The guy really doesn’t seem to have anything better to do, so he’ll stick around until he’s forcibly drop-kicked, or the media gets bored. So until then, we’ll be watching him jogging around his ‘hood in those “plum smugglers”, adjusting his Chucky doll hair, and eating up network airtime. Remember Senator Larry “Toe-Tap” Craig whom everyone wanted to resign after he was caught making baseball hand signals under the bathroom stall? He’s still a working stiff Senator.

Even his airport bathroom isn’t a tourist destination anymore, according to an Associated Press story this week.

French President Nicolas Sarkozy: He’s trying really hard to increase his country’s productivity by legalizing Sunday shopping and lengthening its 35-hour work week (the average vacation is already more than 7 weeks per year, according to the World Tourism Organization). This will cause him no end of grief throughout 2009, and likely beyond. The only work week he will succeed in lengthening will be his own. Bonne chance!

Russian Prime Minister Vladimir Putin: Russia’s economy is tanking badly, but you know what that means. More glamour shots from Prime Minister Barbizon to distract the proletariat! By the end of the year, he’ll be doing a shoot with Annie Leibovitz for the cover of Vanity Fair, featuring him choking a rare tiger with his bare hands, and his popularity ratings will skyrocket. If things get really bad economically, he will challenge Barack Obama to a pectoral flexing contest and obviously win handily, thereby fuelling Russian nationalism for years to come.

Pakistan and India: Pakistan will continue to “hunt for the real killers” in the Mumbai massacre, just like OJ did for years with his wife’s “real killer”. Meanwhile, “suspected” US drones will be firing away at the terrorist-infested areas of the country, as they did around 30 times in 2008. The Pakistani government’s official statement on any such action will continue to be: “Wut?”

Gitmo detainees: Obama will either have to hit the golf course every time the topic of finding halfway homes for the Gitmo terror suspects comes up – or he’ll have to actually farm them out. Maybe start up an adoption charity that puts them on display at United Nations meetings: The ASPCT (American Society for the Prevention of Cruelty to Terrorists). Various sources reported this week that Australian Prime Minister Kevin Rudd may agree to take a few, but this is probably bunk. Why would a country that detains refugees in camps for months until they can clear security let a bunch of guys who were caught hanging out on Mideast battlefields roam the countryside? Unless the Aborigines are bored with the usual fauna.

Iranian President Mahmoud Ahmadinejad: Will say something inflammatory, the world will react. Wash, rinse, repeat once a month - until he actually drops a nuclear bomb on something in order to be taken seriously. Hopefully not this year, though.