Al Gore for Secretary of State! 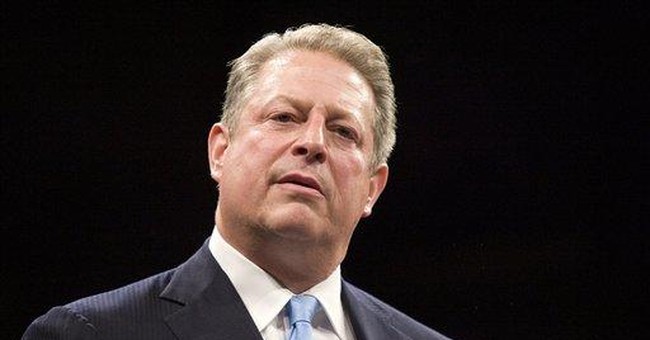 Last week, radio king Rush Limbaugh riffed on the idea of “the haughty John Kerry” being appointed Secretary of State in an Obama administration, traveling the globe and stepping in it wherever he went. Not a bad choice, but if we’re going to try getting our money’s worth in entertainment over the next four years – given that we’ll be paying top dollar – how about Al Gore for the job?

Forget any sort of environmental leadership position that would limit him to America – The Goracle simply cannot be contained. Within mere days of the Obama win, Gore exploded like Chernobyl all over the op-ed pages of the New York Times:

“The inspiring and transformative choice by the American people to elect Barack Obama as our 44th president lays the foundation for another fateful choice that he — and we — must make this January to begin an emergency rescue of human civilization from the imminent and rapidly growing threat posed by the climate crisis.”

Best I can tell, this logic translates to, “We finally have a liberal in the White House. So maybe we can leave open the floodgates for some other crazy stuff. Like my prescriptions for Mother Earth. Before we all die.” I’m not sure if Gore has noticed, but Mother Earth and “human civilization” have some serious financial issues to deal with before we can get to the stories that scare little kids and people with the IQ of an organic carrot. But that shouldn’t stop him from regaling crowds around the world with tales of imminent death and destruction from things like “beach weather”.

Unlike Gore’s rhetoric, the Earth’s temperature hasn’t increased since 1998. He can quote all the scientists he wants, and I’ll quote a bunch of others who say the exact opposite.

How about some statistics showing how much good these carbon taxes have done for the environment? I mean, we’ve been at this for awhile now, almost to the point of quagmire. Is there an exit strategy in place? Will there be a time when airlines will no longer need to offer mentally challenged or guilt prone passengers (likely the same kids who were peer-pressured into sticking their tongue against frozen poles in grade school) the choice to relieve themselves of a few extra dollars in “carbon credits” in the form of a donation to the United Nations or some other obscure projects in places where the main forms of transportation are either polluting heathenmobiles from the 70s or livestock that produce more harmful emissions than any vehicle on earth?

The world needs some answers, and Gore can now take his show on the road in an officially recognized capacity, as he speaks on behalf of the Barack Obama liberals. It would be fun to watch him in Africa – perhaps with his friend Bono – telling all the starving kids that the planet needs their food to fuel his son’s Prius.

We can’t possibly be expected to focus on wars in both Iraq and Afghanistan, but fighting the never ending wars on both poverty and global warming simultaneously would be top-shelf entertainment! Evidence among the tech crowd in America would suggest that to “change the world via the Internet”, you need three things: electricity, a computer, and food (preferably Doritos). But how can Third Worlders hope to begin accessing the “world changing” disinformation on Wikipedia when Al Gore wants to turn their food into ethanol and thinks the electricity that would power all their new computers is something to be limited?

Gore, who is described in the piece’s tagline bio as an investor in “alternative energy companies”, explains another solution to the energy problem: “Here’s what we can do — now: we can make an immediate and large strategic investment to put people to work replacing 19th-century energy technologies that depend on dangerous and expensive carbon-based fuels with 21st-century technologies that use fuel that is free forever: the sun, the wind and the natural heat of the earth. “

That’s great – but we’re looking right now at a struggling auto industry that isn’t going to be saved anytime soon by sun, wind, or the natural heat of the earth that Gore keeps telling us is a bad thing.

So Gore’s talking here about massive solar panels and windmills? Hopefully Gore, Leo DiCaprio and Barbra Streisand will allow for these to be installed in their backyards, because I doubt anyone else will want them. Just ask the liberal populace of Toronto, Ontario, that considers its lone waterfront windmill a noisy $1.8 million eyesore. Perhaps Secretary of State Al Gore can go there and try to convince them otherwise.

Gore’s plan is to, “…help America’s automobile industry (not only the Big Three but the innovative new startup companies as well) to convert quickly to plug-in hybrids that can run on the renewable electricity.”

Is he aware of how unreliable rechargeable batteries are? Has he ever fully charged an iPod, only to find that it’s out of juice a lot sooner than expected? Now apply this experience to a cross-country road trip.

Nowhere is Gore’s New York Times missive is there any mention of nuclear energy – the cleanest, safest, and most effective form of energy available. “Nuclear” is a liberal no-no word. We didn’t hear much from him when uranium was transported out of the MidEast this year and shipped to Canada to power its nuclear reactors in Ontario. A double-victory: more clean energy and less stuff to spin into bombs for Islamic crazies.

We need nuclear energy because despite George Bush “invading Iraq to steal all their oil”, the output has been the same as it was since Gore was Vice-President, and because it takes a long time for new technologies to become realistically viable beyond liberal daydreaming.

In the interim, we can count on Al Gore to entertain us, and I strongly encourage Barack Obama to allow him to do so in an official capacity.