Rachel Alexander
|
Posted: May 06, 2019 12:01 AM
Share   Tweet
The opinions expressed by columnists are their own and do not necessarily represent the views of Townhall.com. 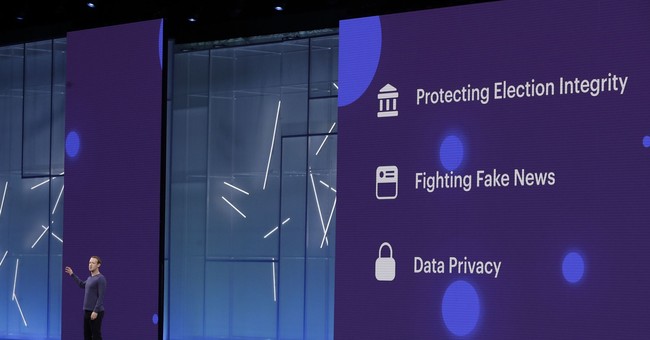 Google, Facebook and Twitter are private companies, so the constitutional guarantees of free speech generally do not apply to people using their platforms. But it’s not that simple. The tech giants have been playing fast and loose with labeling themselves platforms v. publishers, trying to claim protections from both of them.

As publishers, the companies can restrict speech on their platforms as they see fit. Their editorial decisions (not those of their customers) are protected by the First Amendment. However, they are open to lawsuits over the content.

As a platform, or provider of a computer service, a company cannot be liable for content users post on their sites. This is from Section 230 of the Communications Decency Act.

When Facebook was sued by the app startup Six4Three, the tech giant’s lawyers claimed it was a publisher. Six4Three accused Facebook of maliciously removing app developers’ access to friends’ data, forcing it out of business. Facebook claimed it was acting as a publisher and was allowed discretion of what to permit. But in that same case, Facebook asserted that it was a platform and not liable for users’ content.

The big tech giants act as publishers when they weed out offensive content, much like a news publication would. A true platform does not engage in these kinds of restraints. For example, a PC is a platform. You can do whatever you want on your PC and no one is going to censor you.

Facebook CEO Mark Zuckerberg admitted to Congress that the company is “responsible for the content” on its platform. “We didn’t take a broad enough view of our responsibility, and that was a big mistake,” he said. “It was my mistake, and I’m sorry. I started Facebook, I run it, and I’m responsible for what happens here.”

Facebook is proactive about removing content. For example, instead of waiting for someone to complain, it reviews urls the first time they are posted on the site. It even reviews urls sent over its Messenger chat program.

The government actually could jump in and regulate free speech within the big tech companies. In Turner Broadcasting System, Inc. v. Federal Communications Commission, the Supreme Court held that the First Amendment “does not disable the government from taking steps to ensure that private interests not restrict . . . the free flow of information and ideas.” But this would be a dangerous erosion of the First Amendment. The courts have already found a limited forum on the pages Facebook allows for government officials, departments and agencies. A federal district court judge ruled that President Trump blocking people on Twitter violates free speech (the case is on appeal).

If they are a platform protected by Section 230, tech companies are allowed a limited amount of moderation to ban “offensive” speech. However, this is not the same as regulating political speech, which goes too far. Big tech regularly engages in censorship, especially of conservative viewpoints. Banning Infowars, Laura Loomer and Milo Yiannopoulos is banning political speech. It may not be likable speech, but it is nevertheless political speech, not the offensive type of speech Section 230 had in mind.

Once those people are banned, it becomes easier to ban regular conservatives. On April 19, Twitter suspended actor James Woods from accessing his account. Woods is a regular conservative who happens to have a large following and is very witty. The tweet that got him suspended was in response to the Mueller report exonerating the Trump campaign from Russian collusion, "If you try to kill the King, you better not miss. #HangThemAll." How is this any different from the revered free speech of Patrick Henry, “Give me liberty or give me death!” And unlike Woods, Henry meant his statement literally.

By engaging in censorship, big tech is behaving more like publishers than platforms. Lydia Laurenson came up with an easy test for companies to determine which category they fall into: “Does your company want to change the world by making the tool everyone uses — or would you prefer to change the world by being the voice that everyone trusts?”

Big tech is trying to be a new type of hybrid media platform. But they can’t have it both ways and use the benefits of both to mistreat conservatives. It doesn’t follow the law. Law professor Adam Candeub recommends that either Congress or the courts step in and clarify the matter. As the companies continue to engage in censorship of conservatives, it is clear they are acting as publishers.