Rachel Alexander
|
Posted: Feb 05, 2018 12:01 AM
Share   Tweet
The opinions expressed by columnists are their own and do not necessarily represent the views of Townhall.com. 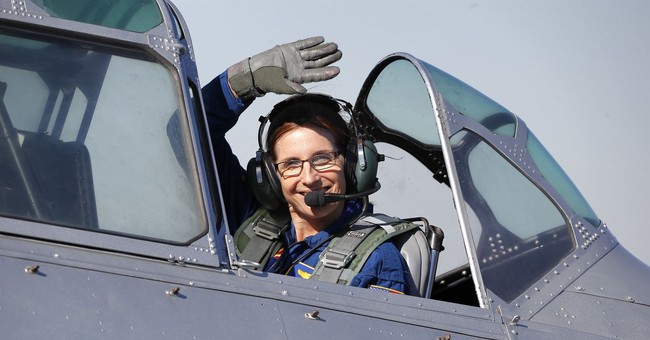 Arizona’s Republican U.S. Sen. Jeff Flake has announced he’s not running for reelection, so several candidates have jumped into the open race to replace him. There are currently three frontrunners. GOP Rep. Martha McSally, a combat pilot who served in the U.S. Air Force, former Maricopa County Sheriff Joe Arpaio, and former Arizona State Senator Kelli Ward. Ward made a name for herself launching an unsuccessful conservative challenge to Sen. John McCain in 2016.

McSally is the darling of the GOP establishment. She was elected to Congress in 2014, representing a swing district seat formerly held by Gabrielle Giffords. Senate Majority Leader Mitch McConnell recruited McSally last year as one of several moderates to run for the Senate. “We are going to be supporting people who can actually win,” he said in his year-end news conference critical of conservative candidates. “But we have got some great candidates out there and you're familiar with them, Martha McSally …” His Senate Leadership Fund super PAC intends to spend considerable money supporting her run.

McSally did not endorse President Trump in the 2016 presidential election. She supports DACA. In 2015, she voted against an amendment to a spending bill that would have ended DACA. In 2017, she sent a letter along with nine other members of Congress to Speaker Paul Ryan, asking him to find a legislative solution to DACA.

Three leading conservative organizations oppose her; the Club for Growth, the Senate Conservatives Fund and FreedomWorks.

Conservatives have complained about McCain’s moderate record for years. Recently, they’ve been highly critical of Flake too. Why would they elect someone who will be even more frustrating? McSally would be better off serving Arizona in the House, being in a difficult swing district for the GOP to maintain ahold of.

McSally is a strong fundraiser so will be a formidable candidate. Polls show she has a reasonable chance at winning the Republican nomination since Arpaio and Ward are splitting the conservative vote. After Arpaio joined the race, Ward dropped to 19 percent in the latest poll. Arpaio came in at 22 percent and McSally at nearly 31 percent.

If Trump makes an endorsement, it will make a significant difference. There is a small chance Trump might endorse McSally. He backed Luther Strange over the more conservative Roy Moore in Alabama’s Senate race, believing Strange was more electable in the general election. The winner of Arizona’s Senate primary will face a formidable challenger in the general. Democratic Rep. Kyrsten Sinema is a relentless campaigner who has positioned herself as a moderate in recent years. There is a concern that Ward is not well-known enough to defeat Sinema. However, at least one poll shows Ward defeating Sinema in the general. Arpaio has been attacked so much through the legal system that there is concern baggage will hurt him in the general.

But Arizona is still a fairly red state. The GOP controls both houses of the state legislature, all 11 statewide offices, both U.S. Senate seats and four of the eight U.S. House seats. This past year, Guns & Ammo ranked it the No. 1 state in the country for Second Amendment-friendly laws. Americans United for Life ranked the state No. 1 for pro-life laws.

People are tired of lukewarm GOP Senators McCain and Flake. It will come out during the general that Sinema once received the Vladimir I. Lenin award from the Arizona Federation of Taxpayers for being the most far left member of the state legislature. A real conservative can defeat her. It’s not necessary to settle for a Republican to the left of McCain and Flake.