Rachel Alexander
|
Posted: Nov 13, 2017 11:54 AM
Share   Tweet
The opinions expressed by columnists are their own and do not necessarily represent the views of Townhall.com. 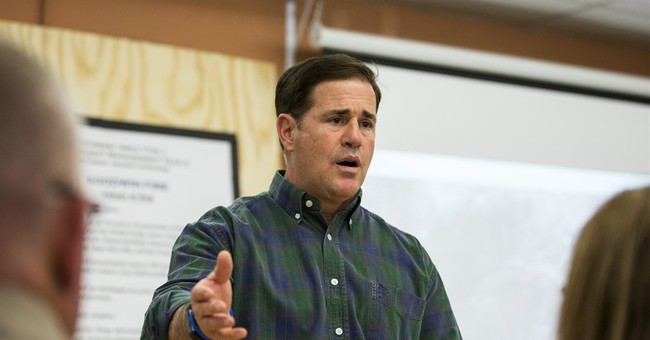 With all due respect to Senator Jeff Flake’s recent surrender to prevailing populist political winds, and the reasonable assumption that Senator John McCain would face stiff headwinds if he was up for reelection this year, Republican Governor Doug Ducey also has big problems on the horizon as he seeks reelection in 2018. Sure, conventional wisdom could lead one to believe a Koch Brothers’ favorite with all the trappings and advantages of power (including millions of dollars in expected fundraising and independent expenditures) could not be defeated in the historically red state of Arizona.

However, like the 2016 election, the 2018 election is not expected to be conventional in Arizona nor in many other states. Historically, low favorability ratings of Congress and disgust with establishment politicians has led to upheaval. Recent Democrat victories in Virginia and New Jersey are likely another sign next year will be one of upheaval.

In recent years, Republicans have not always prevailed at the top of the ticket in Arizona. Democrat Janet Napolitano won the gubernatorial election in 2002 as well as reelection in 2006.

In the 2014 gubernatorial race, then-State Treasurer Ducey prevailed in the bruising and grueling primary with only 37.17 percent of the vote, versus 62.83 percent for seven other candidates. Despite a significant fundraising edge and the prevailing red state winds at the time, Ducey defeated Democrat Fred Duval in the general election with only 805,062 votes versus 626,921 votes, while approximately 74,000 votes were cast for other minor candidates.

Ducey has lost support over the years since becoming governor. Scars and grudges persist with some of the unsuccessful Republican candidates based on the heavy influence and unseemly negativity of the pro-Ducey independent expenditures (aka “dark money”) that has become standard in Arizona yet loathed by its citizens.

In addition, Ducey’s support for Trump’s candidacy has been lukewarm at best, and history is proving President Trump has a long memory for such things.

Besides the fact that Arizona voters are willing to vote for a Democratic governor, voter demographics are changing. Democratic voter registration has grown even more than Republican voter registration. Concurrently, the ranks of Independent voters have swelled. Today there are approximately 1.2 million registered Republicans, 1.1 million Democrats and 1.2 million Independent voters in Arizona.

So, what could all this and more portend for Ducey in his 24x7 campaign to secure re-election as governor and someday run for president?

Arizona may not be a purple state, but it sure isn’t a deeply red state. Arizonans have been, and surely remain, willing to vote for whomever they feel will advance our state and country.

The voter registration gains of the Arizona Democratic Party cannot be overlooked nor minimized just because the Arizona Republican Party currently possesses an approximate 100,000 voter advantage. Furthermore, it is reasonable to surmise voter energy will be with the opposition party in 2018, especially with a coveted U.S. Senate seat wide open due to Flake’s decision not to run for reelection.

The ranks of Independent voters are swelling in Arizona. Independents outnumber Democrats, and are barely outnumbered by Republicans. It is reasonable to surmise voter anger with intransigent government at all levels will be on display in 2018. This positions Independent voters with more power and leverage than ever.

Ducey enjoys some favorable traction with Republican voters in Maricopa County where Phoenix is located. Overall, Maricopa County comprises well over 60 percent of the electorate — but Democratic registration is growing. Furthermore, in Arizona’s second largest county, Pima County, where Tucson is located, various polls show Ducey’s numbers in the tank.

Ducey’s two reported challengers for 2018 are liberal Democrats. Dr. David Garcia is a highly respected educator based in Maricopa County who barely lost his 2014 run to become Arizona Superintendent of Public Instruction. Senator Steve Farley is an ultra-liberal yet avuncular politician with an ability to disarm many with his smile and wit. Both gentlemen are not viewed as strong challengers to the sitting governor, but Arizona citizens are restive just like tens of millions of other Americans.

As promised, Ducey has delivered for big business in Arizona, and is advancing his small business initiatives by way of regulatory reform. There is goodness to this, but the trickle down to average Arizonans is not often felt. Arizona’s wealthy are thriving. Arizona’s middle class is shrinking. Democrats accuse Ducey of neglecting the poor. His prolific press release machine does not actually solve the problems of simple average Arizonans trying to claw their way to the American dream.

Ducey has largely alienated Arizona public school teachers with his soaring rhetoric and limited action. His 2017 State of the State speech was very strong in its support for public schools and the plight of low-paid public-school teachers. However, his follow-up proposal to grant them a meager two percent raise over five years not only fell flat, it made him a political laughingstock to rank-and-file school teachers in Arizona.

Ducey is closely aligned with Senators McCain and Flake, both highly unpopular at this juncture. Self-fashioned “maverick” McCain cratered the repeal of Obamacare which significantly angered Arizona Republicans. Self-fashioned political martyr Flake has heaped derision on President Trump at every turn.

A recent and extensive statewide poll that I was privy to review as background for this article highlighted what many people can easily surmise on their own, and that is Arizonans want truly independent, non-partisan outsider solutions. It found that 74.3 percent of Republicans would vote for a “truly independent, non-partisan” candidate for governor. Even more Independents and Democrats agreed. Perhaps, like most Americans, Arizonans are weary of partisan political rancor and limited action that is often glossed over with soaring rhetoric and flowery press releases from both parties.

Ducey appears to have cleared the gubernatorial primary as the Republican candidate for 2018. However, the intriguing and disruptive specter of an independent, bi-partisan, coalition-building candidate for Arizona governor looms large in the person of Timothy Jeffries. As previously and widely reported, Jeffries is an unflinching Roman Catholic and highly successful businessman who came from a broken family to build an impressive “Only in America” success story that continues to unfold.

Jeffries served in Ducey’s cabinet as the director of social services in Arizona for approximately 21 months. The day before Thanksgiving last year, Jeffries (aka “Director J.”) and several of his trusted leaders were unceremoniously ousted from their transformational roles, much to the disappointment and dejection of thousands of social services workers and social services partners throughout Arizona. Approximately 2,000 of 8,000 of Jeffries’ former “colleagues” in social services have contacted him over the past year, and the word is over a thousand of these very same Arizonans have asked Jeffries to run for governor. Jeffries is a rising star in Arizona politics with a knack for government reform, and Arizonans are flocking to him in droves. Many believe he was wrongly fired by Ducey.

The Arizona governor’s race is looking like it will have as much excitement, if not more, than the U.S. Senate race to replace Senator Jeff Flake.