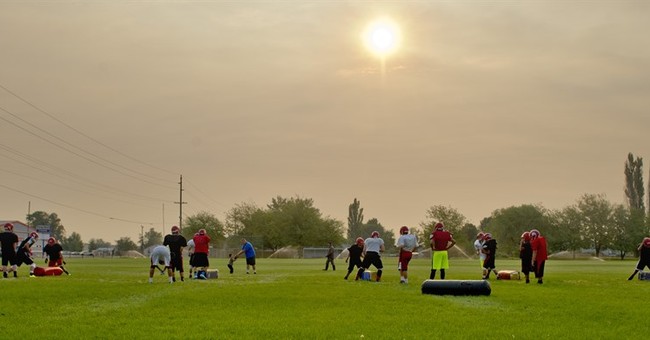 Political correctness has invaded my alma mater. I was disappointed to receive an email from our hometown pastor last week, informing me that the assistant football coach at my high school alma mater in Washington state was being investigated for praying with his team. My late brother played football on that team. How could the school have strayed so far off?

Football teams and saying prayers at games go hand in hand; it is a longtime American tradition. Coach Joe Kennedy, a Marine Corps veteran and well beloved by students, has been leading a prayer after each Bremerton High School football game for nine years. But after two people allegedly complained to the school, he was told to immediately stop. Kennedy, who is Bremerton’s junior varsity coach and varsity assistant coach, said he was told he would be fired otherwise. He was not even allowed to bow his head.

After last Friday night’s game, where supporters showed up with signs to support him, Kennedy gave a speech, but didn’t pray. However, the team spontaneously said The Lord’s Prayer, and supporters met on the 50-yard line and sang all four verses of Amazing Grace.

Kennedy says his prayers are optional, and that one of the team captains is an atheist. He also said he was unaware of school policies against teachers leading a prayer.

The absurdity of this censorship can be seen when contrasting it with other situations where a student might find something offensive. One student might be offended by a coach spitting. Or saying a swear word. Or rubbing him hard on the head. The possibilities are endless of what the coach might do, that one or two players might deem distasteful.

So, why is one type of action — praying — singled out and banned by distorting the meaning of the First Amendment? The First Amendment is first because the founders believed one of the most important things to the country was protecting the freedom of religion, which included prohibiting the government from establishing one state religion. It was never intended to mean the opposite — effectively prohibiting the free exercise of religion.

This sets a dangerous precedent for football teams all across the country. How far will this censorship go? What if a teacher wants to quietly read a Bible over lunch at their desk? Or help with a voluntary student Christian group?

After nine years of praying, it takes just two people to challenge this, and they get an immediate response and shutdown of prayer by the school district? It is frightening that such a simple thing — voluntary, uncoerced, after-game prayer — should be attacked so ferociously.

Maybe the opposition is principled, however misguided. But there’s another possibility: it’s a few people with guilty consciences. Some don’t want to ever encounter any reminders of religion, especially the Christian religion, because it is a nagging reminder that they may not be living a moral life. Considering how many people are blessed by practicing their religion, and all the charity that is done in the name of religion, it is sad that a few anti-religious folks would seek to shut down religion in this way.

I spoke with Marty McClendon, a Republican pastor who ran for U.S. Representative in the area where Bremerton High School is located, and he responded thus:

This is symbolic and representative of a much bigger issue. This is a wake-up call to the Christian church, the voters of this state and of this nation. When we have a nation where upwards of 70 percent of the people proclaim to be Christian, and there is mountains of evidence of our Judeo-Christian values throughout our history, laws, courts and education, we are allowing political correctness to completely remove the moral fabric of this great nation. We are allowing our elected officials to go against the very will of the people to appease or advance certain special-interest groups.

It is time that we all stand up and support the Coach Kennedys of the world, but it it’s also time that we elect people who will protect everyone’s rights to all of the amendments without bias, and without an agenda that is contrary to the will of the people. It is time to come together and put a stop to the war on Christianity. We do this by being bold, by being engaged, and by not bowing to the threats of political correctness. We do this by getting involved in the political process.

If we do not fight now, I believe it will be too late. As President Reagan said, “If we ever forget that we’re one nation under God, then we will be a nation gone under.” And from the Bible and the book of Isaiah, “Woe to those who call evil good and good evil, who put darkness for light and light for darkness, who put bitter for sweet and sweet for bitter!” What Coach Kennedy was doing is good and not evil, and I pray that even more support will come for him and others who are willing to stand for truth — and even more pressure will come to elected officials who would attempt to trample on our constitutional rights. It is time we say no more.

Some fear that Bremerton High School might lose federal funding if Kennedy is allowed to continue leading prayers and the federal government decides the school is on the wrong side of the First Amendment. Representatives Jesse Young (R-Gig Harbor) and Michelle Caldier (R-Port Orchard) intend to introduce legislation to give coaches immunity when praying with students. They have sent a letter to the school asking for information about the investigation. Others are contacting the school board asking for a change in the policy. A Facebook page was started to support the coach.

Another solution that has been proposed is to have one of the students lead the prayer instead of the coach, since the students are still permitted to pray with one another. Will one take the lead? The bullies trampling the Constitution through a tyranny of the minority must be stopped.