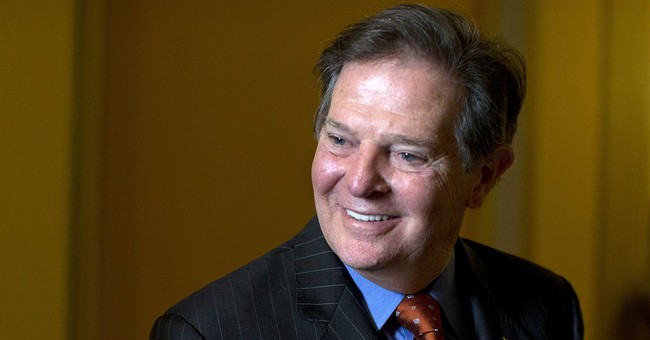 If you tried to find out what recently happened in court ending the criminal case against former GOP Congressman Tom DeLay, almost all the results that come up are from conservative sites. The left-wing news media deliberately ignored the story of his total legal exoneration earlier this month. Contrast this with the multiple, lengthy front-page articles than ran for years gleefully covering the progression of the politically motivated attacks on him.

I saved an article taking up the top half of the front page of The New York Times from 2006 - with a huge photo of DeLay high-fiving my cousin, a Congressional staffer - announcing that DeLay was being forced to leave Congress due to the indictment. In contrast, the Times printed a tiny, three-sentence paragraph about the exoneration that was buried in the print edition on page A20.

When DeLay was indicted in 2005, most people around the country did not understand how politically motivated the left-wing Travis County District Attorney was. Now that sitting Texas Governor Rick Perry is being prosecuted by current DA Rosemary Lehmberg, a convicted drunk driver, the targeting by that Democrat-controlled office is finally coming to light. The Austin-based office badly overstretched going after the popular governor, and now its history of corrupt prosecutions are all coming to light.

Former GOP Senator Kay Bay Hutchinson was also indicted by the same office, and fortunately for her, then Travis County DA Ronnie Earle’s bogus witchhunt was thrown out. DeLay describes what happened to Earle’s prosecution, “The case [against Sen. Hutchison] did go to court, and his case absolutely imploded the day they went to trial. The judge kicked them all out of his courtroom.”

DeLay achieved a respectable 95.39 percent rating in Congress from the American Conservative Union after serving 21 years. He became a born-again Christian in 1985. This combined with moving up to the powerful position of Majority Whip followed by House Majority Leader explains why the left came after him so viciously. He is far from a criminal, but rather a kind and decent man. He and his wife founded a Christ-centered foster community called Rio Bend near Richmond, Texas. They fostered three boys themselves.

The targeting of conservative DeLay for political reasons began way back in 1996. DeLay told WND’s Jerome Corsi that “Nancy Pelosi and Patrick Kennedy, then a Democratic congressman from Rhode Island and the chairman of the Democratic Congressional Campaign Committee, announced publicly that they were going to take me out of politics.” They filed ethics charges against him in 1996 and 1998, which were both dismissed. Democrats next filed more ethics charges against him in 2011, followed by a racketeering charge in 2012 - all dismissed.

In 2002, Earle filed criminal charges against DeLay for allegedly laundering $190,000. The money had been transferred from ARMPAC to another committee, where it was then donated to candidates in Texas. Earle claimed that since the donations ultimately went to candidates, instead of things like administrative expenses, money laundering occurred. While it is illegal for corporations to contribute directly to a candidate, it is not illegal per se to contribute to a PAC, which then contributed to candidates - especially if both parties did not “knowingly” violate the law. The corporate entities, which included Cracker Barrel and Sears and Roebuck, had consulted with their legal departments and determined the donations complied with all laws.

Eight long years of trial later, DeLay was convicted in 2010 by the trial court, and sentenced to three years in prison plus probation. He appealed, and the first appellate court overturned the conviction last month, ruling that the evidence in the case was “legally insufficient to sustain DeLay's convictions.” But the politically motivated prosecutors wouldn’t let up squandering taxpayer dollars, appealing the verdict up to the next court, the Texas Court of Criminal Appeals. Just a few days later, perhaps to make a statement, that court - the final court for state crimes - issued an 8-1 ruling affirming the lower court’s dismissal of the conviction, acquitting DeLay of all criminal charges.

Both appeals courts held that there was no evidence that either the contributors or ARMPAC knowingly made and accepted illegal contributions. The second court reiterated the lower court, opining, “...the State’s evidence failed to show that the corporations harbored the requisite intent to violate Section 253.003(a) of the Election Code,“[g]iven the testimony of the corporate representatives [of the lack of any intent to violate Texas law] and the undisputed facts that the corporations could lawfully make donations to TRMPAC and TRMPAC could lawfully transfer the corporate funds out of state[.]” It strains credibility that several large corporations with substantial legal departments and a lot to lose, would coincidentally all happen to knowingly break the law.

This is all about trying to accomplish through the courts - even criminally - what the left has not been able to do at the ballot box. DeLay told WND, “What the Democrats did to me is right out of the pages of Saul Alinsky’s ‘Rules for Radicals … I’m very excited that I can now get on with my life, and whatever the Lord has got for me, that’s where I’m headed … Hopefully I can get a job. I am not a rich man.” He is now 67 and has not ruled out another run for office.

The 18-year war waged by Democrats against DeLay has cost him an estimated $12 million in legal fees. Where is the apology from then-DA Ronnie Earle? Tom DeLay is considering a lawsuit against the Travis County District Attorney’s Office for prosecutorial misconduct. Let’s hope he does, because until this targeting is stopped, it will continue against conservatives - especially those in Travis County.