Phyllis Schlafly
|
Posted: Jun 28, 2016 12:01 AM
Share   Tweet
The opinions expressed by columnists are their own and do not necessarily represent the views of Townhall.com. 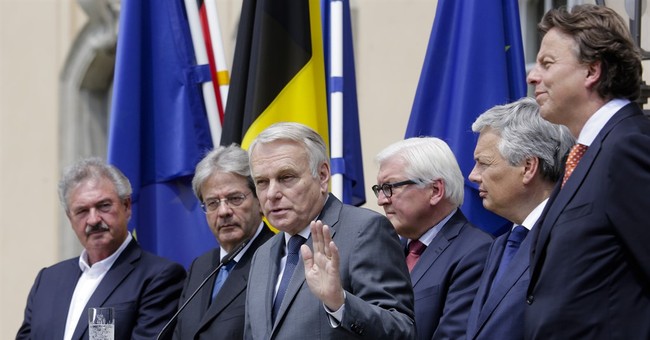 Trending
Britain's decision to "leave" the European Union (EU) ended the career of Prime Minister David Cameron, who had campaigned hard to "remain" in that supranational body of unelected bureaucrats. Small-c conservatives in Cameron's own Conservative Party rebelled against the liberals and globalists who dominate both major parties over there. Sound familiar?

Everyone agrees that Donald Trump is the big winner of the vote. As the New York Times conceded, the "leave" voters are "eerily similar to Donald Trump's followers, motivated by many of the same frustrations and angers."

Trump, who just happened to land in Britain as the results were announced, was quick to draw the obvious parallels. He promised that "Americans will have a chance to vote for trade, immigration and foreign policies that put our citizens first. They will have the chance to reject today's rule by the global elite."

Imagine if the Republican Party were stuck with yet another Bush as its presumptive nominee instead of Donald J. Trump. From the first George Bush's foolish declaration of a "new world order" on September 11, 1990 to the second George Bush's obsessive attempts to promote economic integration within the Western Hemisphere, the Bush family is committed to a globalist ideology which the English-speaking people on both sides of the Atlantic have firmly rejected.

Soon after he became president, George W. Bush traveled to Quebec City in April 2001, where he called for "hemispheric integration" -- in other words, an economic union, like the European Union, for 34 countries of the Western Hemisphere. Bush committed his administration to negotiating a Free Trade Area of the Americas that would become effective no later than 2005.

When his grand vision of hemispheric integration was foiled by the rise of anti-American rulers in Venezuela and Bolivia, Bush repackaged his globalism in the form of a North American union, which he launched in Waco, Texas in March 2005. That meeting of the "three amigos" had the goal of expanding NAFTA from merely a "free trade" agreement to closer political union among the three countries of North America (the United States, Canada and Mexico).

The specter of a North American Union, modeled on the European Union, was aggressively pushed by one of the three amigos, Mexican President Vicente Fox, who recently was back in the news for using a vulgar epithet against Donald Trump. Wall Street Journal editor Robert Bartley wrote of Fox: "There is one voice north of the Rio Grande that supports his vision. To wit, this newspaper."

The Bush-Fox vision of a unified North America was given glossy support by numerous think tanks including the Council on Foreign Relations (CFR) whose 70-page report, "Building a North American Community," called for "the extension of full labor mobility to Mexico." The CFR report was co-authored by Senator Ted Cruz's wife Heidi, who wrote: "I support the Task Force report and its recommendations."

Given Bush's support for "full labor mobility" between the United States and the corrupt, violent, drug-trafficking nation across our southern border, it's no wonder that Bush was also an advocate of "comprehensive immigration reform," i.e., giving amnesty to millions of illegal Mexican immigrants, which our Congress wisely rejected in 2006, 2007 and 2013. Among the British people who voted to leave the European Union, the biggest reason was the EU's complete failure to control the flood of immigrants from Asia, Africa and the Middle East.

The powerful "breaking point" poster was widely distributed by the campaign to "leave" the EU. The poster showed an actual photograph of Europe's insecure border at its weakest point in Slovenia, showing a column of thousands of illegal immigrants, extending far off in the distance as far as the eye can see, with the caption: "The EU has failed us all. We must break free of the EU and take back control of our borders."

Senator Jeff Sessions (R-AL) recalled that the 1979 election of Margaret Thatcher as Prime Minister of Great Britain was an early sign of the 1980 wave that swept Ronald Reagan into the White House. "Now it's our time," Sessions said, to defeat "the establishment forces, the global powers" that "want to erode borders, rapidly open America's markets to foreign produced goods, while having little interest in advancing America's ability to sell abroad."