Phyllis Schlafly
|
Posted: May 31, 2016 12:01 AM
Share   Tweet
The opinions expressed by columnists are their own and do not necessarily represent the views of Townhall.com. 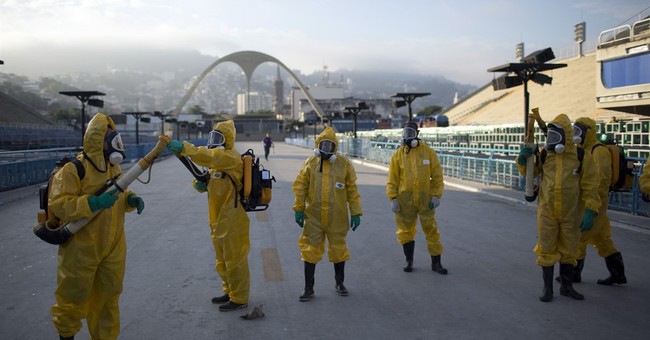 The spread of the Zika virus has become so alarming that more than 150 health experts from over a dozen countries published an open letter urging the postponement or relocation of the Summer Olympics scheduled for August 5-21 in Rio de Janeiro, Brazil. Never before in world history have the Olympics been cancelled due to a public health crisis.

“The Brazilian strain of Zika virus harms health in ways that science has not observed before,” the scientists warned. They added that an “unnecessary risk is posed when 500,000 foreign tourists from all countries attend the Games, potentially acquire that strain, and return home to places where it can become endemic.”

Imagine that! Global health experts are sounding alarm bells against the transmission of disease from one country to another, declaring that the risk is so great that the most famous international event of all should be called off to prevent it.

Yet our open southern border allows an even greater number of people from Zika-plagued countries to invade our country every year, and thereby spread their diseases in our communities. Most countries in Central and South America, not just Brazil, are beset by the Zika virus today.

Countries having a problem with the Zika virus include Mexico, Costa Rica, El Salvador, Guatemala, Honduras, Nicaragua, Panama, Argentina, Brazil, Colombia, Ecuador, Paraguay, Peru, and Venezuela. Those are the same countries that are flooding our Nation with illegal immigrants.

President Obama demanded that Congress appropriate $1.9 billion to fight the Zika virus in other countries, but none of that money would be spent on securing our southern border against illegal immigration from Zika-plagued nations. Obama’s clueless Secretary of State, John Kerry, told the graduating class at Northeastern University, “You’re about to graduate into a complex and borderless world.”

Australia doesn’t have a wide-open border with adjacent countries, but an expert there expressed concern about the risk of a single Zika-infected person entering that nation. “A single person actually caused the epidemic that” Brazil is struggling with now, Australian Professor of Health Sciences Charles Watson observed.

In Britain, a professor of international public health, Jimmy Whitworth, warned pregnant women in that country to “think twice” before traveling to Texas and Florida, including Walt Disney World. Although Zika has not yet been found in American mosquitos, Professor Whitworth expects that to change “in two or three months’ time” because mosquito transmission is already occurring in Mexico and Cuba.

It is through mosquitos that the Zika virus can spread quickly from one infected person to others in the same community, causing terrible birth defects when pregnant women become infected. This transmission by mosquito is similar to that of dengue, an untreatable disease also being brought into the United States from Central and South America.

The Zika virus is not the only devastating disease that is brought into our Nation through illegal immigration. The Ebola virus with its 70% fatality rate has killed more than 11,000 people worldwide and caused a national panic in 2014 when it reached our shores through an African visitor who was not properly screened before he showed up in Dallas.

Among refugees from Somalia who have been resettled in Minnesota, a shocking 22% are infected with latent tuberculous (TB), which is more than five times the rate in the general American population. In addition to its harmful effects to health, TB is also very costly to treat: easier cases cost $17,000 per patient, while the most serious strains cost $430,000 per patient using treatments extending over three years.

Promoters of free trade insist that our economy can absorb these astronomical health care costs, but they drive up health insurance premiums for everyone. Illegal immigrants typically lack their own health insurance, and they show up at emergency rooms to demand medical care paid for by the American taxpayers.

Measles cases are also brought to us mostly by immigrants. Measles outbreaks in detention centers for illegal aliens are commonplace now.

The Centers for Disease Control and Prevention has officially advised pregnant women to postpone visiting the many Central and South American countries having a Zika epidemic. But if it makes sense to tell Americans not to go there, then why does the Obama Administration welcome infected people from those countries to come here?

The World Health Organization concluded that canceling or moving the Olympics would not have a significant benefit in slowing the spread of the Zika virus. But their reasoning is due to the fact that the virus is already widespread in many countries in the Western Hemisphere, though not yet in the United States.

We have no control over whether the Olympics is canceled, but we do have control over our borders. Billions of taxpayer dollars are currently spent on disease control that could be more cheaply and more effectively used to halt the flow of illegal aliens over our southern border.