Phyllis Schlafly
|
Posted: Apr 26, 2016 12:01 AM
Share   Tweet
The opinions expressed by columnists are their own and do not necessarily represent the views of Townhall.com. 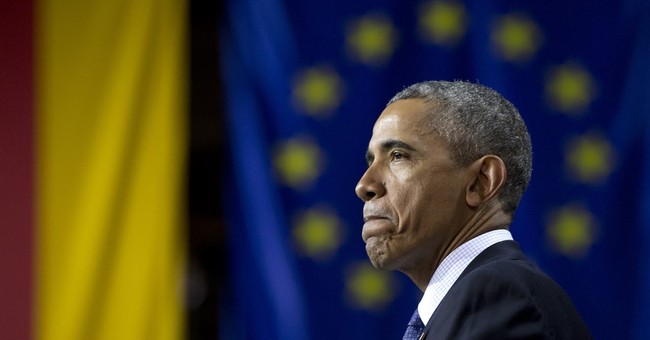 Trending
President Obama quietly slipped out of the country last week for a world tour intended to enhance his "legacy" as a globalist. His first stop was Saudi Arabia to reassure King Salman of America's continued support for that brutal absolute monarchy, where Christians are forbidden to worship openly.

Obama then went to London to socialize with members of Britain's royal family and play a round of golf with Prime Minister Cameron. At a joint news conference with the prime minister, Obama advised the British public how to vote on "Brexit," the June 23 referendum on whether to leave the European Union.

Britain's Queen Elizabeth II is prohibited from expressing her personal views on such a controversial matter, but that didn't stop America's head of state from intruding on another country's domestic political issue. Just as in our own presidential race, the loss of national sovereignty is a major issue in the United Kingdom where public opinion forced the government to call a referendum on continued membership in the EU.

Obama even published an op-ed in Britain's Daily Telegraph to urge Britain to stay in the European Union. Suggesting that national sovereignty is merely a relic of the past that "we all cherish," Obama wrote that today's challenges of "migration, economic inequality, the threats of terrorism and climate change" require "collective action."

No, the best way to control "migration" and "the threats of terrorism" is to restore national sovereignty. Events of the past year -- from the terrorist attacks in Paris and Brussels, to the way Germany was overrun by more than a million Muslims from the Middle East -- prove the failure of "collective action" through the EU superstate.

President Obama obviously doesn't believe in national sovereignty, but has used every available way to tie us down in a web of global controls and commitments. Hence the enthusiasm by ordinary Americans for presidential candidates who promise to reverse the bipartisan "consensus" run by and for the elites.

The U.S. presidential race in both parties has come down to three aspects of national sovereignty: controlling our borders, regulating trade in the interests of American workers, and avoiding pointless foreign wars in the Middle East. On all three issues, Hillary Clinton is on the wrong side, and so are the Republican kingmakers who are trying to stop Donald Trump and Ted Cruz from winning the Republican nomination.

While Obama was campaigning for global governance in London, his Secretary of State John Kerry was in New York to sign the global climate change agreement adopted with great fanfare in Paris last December. Some 175 nations sent representatives to the UN for a signing ceremony on Earth Day.

Many of the 175 nations plan to submit the agreement to be ratified by their respective legislatures, but Obama has no plans to seek the advice and consent of the U.S. Senate. As Senator Mike Lee (R-UT) says, "The only reason President Obama is not sending the Paris Climate Agreement to the Senate as a treaty is that he knows the Senate would handily reject it."

Lack of ratification is not stopping Obama from implementing what he considers a binding agreement containing enforceable "pledges" to reduce the use of carbon fuels. Obama's Clean Power Plan regulation was temporarily blocked by the Supreme Court shortly before Justice Scalia died, but a host of other costly regulations are moving forward with little or no resistance from the Republican Congress.

At the very least, Senator Lee says, Congress must block any more payments to the UN's Green Climate Fund, to which taxpayers have already sent $500 million. That's in addition to the $10 billion a year our government wastes on "green" energy schemes, which can't provide steady, reliable and affordable electricity.

Obama concluded his weeklong foreign trip in Germany, where he praised Chancellor Angela Merkel's disastrous mishandling of Muslim migrants and refugees, saying she's "on the right side of history on this." No, the right side of history would have been to emulate the Polish King Jan Sobieski who turned back Muslim invaders at the Gates of Vienna on September 11, 1683.

German sovereignty is now so compromised that Merkel agreed to prosecute a German comedian for reciting a poem that she said was "intentionally insulting" to the Turkish president. Turkey controls the flow of migrants and refugees into Germany, and could easily send many more.

Even in our country, political correctness has prevented an open discussion of how immigration is changing our culture. We need a president who restores national sovereignty and puts Americans first.