Phyllis Schlafly
|
Posted: Feb 23, 2016 12:01 AM
Share   Tweet
The opinions expressed by columnists are their own and do not necessarily represent the views of Townhall.com. 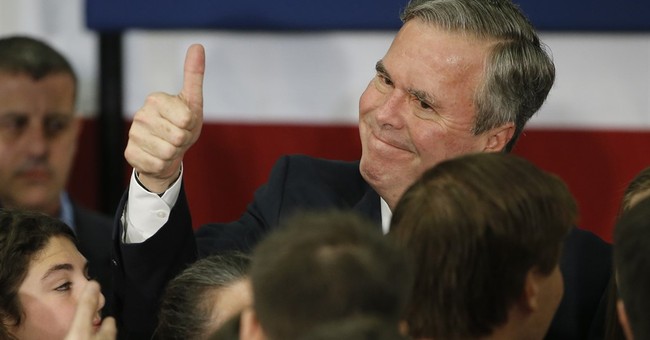 As Republicans try to make sense of Donald Trump's huge victory in the South Carolina primary, the big news is the shellacking of Jeb Bush in a state that voted four times for a George Bush for president. Trump defeated Bush by the overwhelming margin of 4-to-1 (33 percent to 8 percent).

When Bush suspended his presidential campaign following his humiliating rebuke by South Carolina's Republican voters, it was more than just a personal disappointment. It marked the end of the Bush family's 25-year campaign to remake public education according to federal standards.

Exactly one year ago, before he announced that he would be running for president, Trump was asked on Hugh Hewitt's radio talk show: "What does Donald Trump think about Common Core?" He replied, "Well, first of all, I think it's going to kill Bush."

Hewitt expressed surprise, so Trump explained: "For people in Washington to be setting curriculum and to be setting standards for people living in Iowa and other places is ridiculous. People don't want to have somebody from Washington looking down and saying this is what you're going to be studying."

That interview was four months before Trump launched his presidential campaign with his sensational promise to make Mexico pay for a wall on our Southern border. Although his warnings about Mexican and Muslim immigration drew the most attention, Trump continued to denounce Common Core in all his campaign speeches, and one of his few campaign ads was devoted to it.

One year later, it's clear that Trump was right: not only that it's "ridiculous" for "people in Washington" to be setting curriculum and standards for "what you're going to be studying" -- but he was equally right to foresee that Common Core would "kill" any chance of returning the Bush family to the White House.

It all began in 1988 when then-Vice President George H.W. Bush, hoping to succeed Ronald Reagan, declared that he wanted to be "the education president." Bush adopted that label in order to define himself as what he would later call a "kinder, gentler" conservative than Reagan.

After his election to what many viewed as "Reagan's third term," Bush summoned the 50 state governors to attend a two-day education summit in Charlottesville, Virginia. The 1989 Charlottesville summit, underwritten by major corporations such IBM, launched the basic idea that later became Common Core: national standards for what is taught, enforced by measures of "accountability" to ensure that all schools toe the official line.

That summit made a little-known Arkansas governor named Bill Clinton into a national figure big enough to run for president, and when Clinton ousted Bush 41 from the White House, he pursued the same education policies he helped develop at Bush's Charlottesville summit. Helped by wife Hillary Clinton's board membership on a corporate-funded outfit called the National Center on Education and the Economy, Clinton rebranded Bush's America 2000 as Goals 2000.

Then George W. Bush emerged with his own campaign as a "compassionate conservative" using the slogan "leave no child behind." Bush's No Child Left Behind law picked up right where his father and Bill Clinton left off, with the same standards-and-assessment model of federal control.

When the failure of No Child Left Behind became too obvious to ignore, the same failed ideas were repackaged by the National Governors Association under the label Common Core. Although the NGA is a private, corporate-funded lobbying organization with no power over public schools, the Common Core was quickly adopted by 46 states and the publishing industry rolled out new textbooks supposedly "aligned" to the Common Core.

As Common Core became toxic, Jeb Bush made a too-little, too-late attempt to rebrand the same ideas under a new name. Last month, he issued a new education position paper described as "a blueprint for a 21st century American education system" which he said was "the great civil rights challenge of our time."

Putting education reform under the mantle of "civil rights" was the tip-off that federal control would continue in any Jeb Bush administration. Once something is declared to be a matter of "civil rights," states aren't allowed to experiment or deviate from uniform rules enforced by the federal government.

The runner-up candidates in South Carolina, Senators Ted Cruz and Marco Rubio, have also spoken out against Common Core, although both senators were absent on December 9 when the Senate voted to extend federal control over local schools for another five years. Hopefully, the Republican Party has returned to its pre-Bush position against any federal role in public or private education.