Marriage on the Chopping Block? 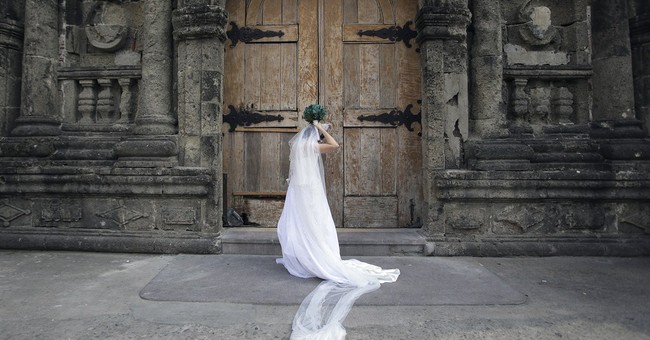 Trending
Within hours after the Supreme Court announced it would decide whether the Constitution requires every state to recognize marriages between persons of the same sex, the New York Times published an editorial gleefully predicting the inevitable outcome. When its ruling comes down in June, the Times assures us, the Supreme Court will "end the debate once and for all."

It's undeniable that a sense of momentum, skillfully propagated throughout the media, including the "conservative" Fox News Channel, has carried the gay movement to the brink of final victory over traditional values and religious beliefs of most Americans. If the Supreme Court rules as predicted, its decision will achieve the longtime goal of the gay movement: to silence Christians from freely expressing their traditional beliefs in the public square, allowing them, at best, the privilege of speaking to each other privately inside the four walls of their churches.

To increase the pressure to accept the inevitable, we're told that more than 70 percent of Americans already live in the 36 states that have recently begun to issue same-sex marriage licenses. The truth, of course, is that only 12 states made that decision through a democratic process; in the other 24 states, the change was imposed by unelected judges -- in several states (including California and Pennsylvania) by only a single judge.

But if the justices follow their own precedents, as they are supposed to do, the court will fail to deliver the result that the Times and most pundits have declared is a done deal. After all, no previous Supreme Court decision has ever questioned the authority of the states to define marriage as the union of husband and wife.

Once before, a gay couple from Minnesota asked the high court to rule that their state's husband-wife definition of marriage violated the U.S. Constitution. The question then was identical to the one the Supreme Court has agreed to decide this year: "Does the 14th Amendment require a state to license a marriage between two people of the same sex?"

Despite the presence of such liberal judicial activists as William Brennan, Thurgood Marshall and Harry Blackmun, the Court in 1972 summarily rejected the Minnesota gay couple's appeal "for want of a substantial federal question." In other words, the court unanimously thought the claim was so outlandish that it didn't even warrant a formal hearing.

Some have questioned whether a one-sentence decision from 43 years ago should really be binding today. But that's not the only precedent that should prevent federal courts from requiring the states to change the definition of marriage.

A series of cases have established the principle known as the "domestic relations exception" to federal court jurisdiction. That principle explains why federal courts do not accept cases involving divorce, alimony, child custody or support, which are exclusively heard in state courts.

That principle was recognized as early as 1859, but its clearest statement comes from a Supreme Court decision in 1890, which said: "The whole subject of the domestic relations of husband and wife, parent and child, belongs to the laws of the States and not to the laws of the United States." That ringing declaration was reaffirmed by the Supreme Court in 1992 and again in 2004.

The domestic relations exception should have prevented federal judges from ordering states to redefine marriage, but a string of recent decisions by federal district and circuit courts (most recently in Mobile, Alabama) have ignored that historic rule. It's long past time for the Supreme Court to reaffirm the principle that federal courts have no business intruding on the States' authority over domestic relations.

Many Americans wrongly assume that the concept of "judicial review," which originated in the famous case of Marbury v. Madison, authorizes a single federal judge to overturn any state law the judge thinks is unconstitutional. Actually, for the first 87 years of our country, federal courts below the Supreme Court were not allowed to decide questions "arising under the Constitution."

So-called federal question jurisdiction was withheld from the courts because Congress rightly feared that federal judges would abuse their power. When Congress finally conferred the "federal question" power in 1875, the law creating that new jurisdiction was expressly limited to "cases in law and equity," a phrase that historically excluded marriage and thereby preserved the "domestic relations exception" as the Framers understood it.

Some have urged Congress to pass a new law explicitly prohibiting the federal courts from invalidating state laws reserving marriage to persons of the opposite sex. While there's no doubt that the Constitution gives Congress the power to pass such a law, Congress could simply reaffirm that the law it passed in 1875, which is still on the books, already limits judicial power to redefine marriage.