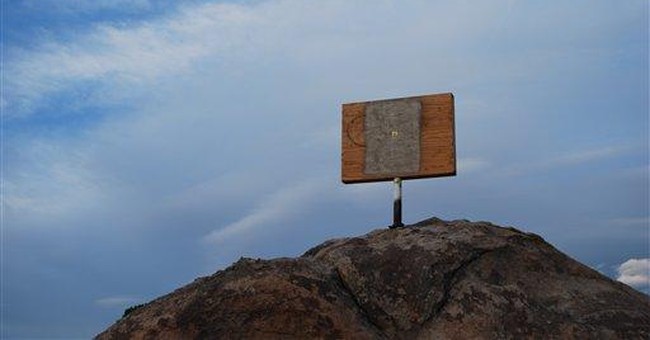 President Obama had a golden Memorial Day opportunity to show the country that (contrary to his left flank) he is not anti-military and not anti-Christian, by telling Attorney General Eric Holder to order the Park Service to permit volunteer veterans to replace the Mojave Cross that was stolen on May 9. But he let the atheists and those who sneer at our veterans win the day.

The homemade 7-foot-tall cross, made from two sections of hollow metal pipe filled with concrete, bolted together and painted white, was erected in a remote spot of the 1.6-million-acre Mojave Desert back in 1934 by the Veterans of Foreign Wars as a memorial to World War I veterans. In order for an atheist to claim he was offended by the sight of the cross on U.S. Park Service property, he would have to travel 10 miles from the nearest highway and 30 miles from the nearest town, across an inhospitable and rocky terrain.

For nine years, the cross has been the target of lawsuits by the ACLU, representing atheists who appeal to supremacist judges to rule that this memorial cross violates the First Amendment and so-called separation of church and state.

In 2001, a federal judge ordered this cross to be covered until the legal issues were finalized. First, it was covered by a large tarp, and later by unpainted plywood, which looked rather like an unsold billboard.

Congress then intervened and transferred to private ownership the small plot of land on which the cross stood. That should have ended the dispute, since obviously a cross can be on private land regardless of how much it annoys the neighbors.

In 2008, the liberal Ninth Circuit again ordered the cross to be removed rather than transferred to private ownership. Forward to the U.S. Supreme Court.

The majority decision was written by Supreme Court Justice Anthony Kennedy. He elaborated on the important difference between complete exclusion of religion from the public square and proper enforcement of the Establishment Clause.

Kennedy wrote: "The goal of avoiding governmental endorsement does not require eradication of all religious symbols in the public realm. ... The Constitution does not oblige government to avoid any public acknowledgment of religion's role in society. A relentless and all-pervasive attempt to exclude religion from every aspect of public life could itself become inconsistent with the Constitution."

That ruling should have allowed the Mojave Cross to stand as it had done for 76 years, but two weeks later the cross was stolen. That wasn't an easy theft because the Cross was bolted to its foundation on Sunrise Rock.

The next day, an anonymous letter was delivered to a local newspaper purporting to explain the motive for the theft. The newspaper printed the letter but did not vouch for its authenticity.

The letter-writer falsely claimed that the monument represented "favoritism and exclusion" as well as "discrimination or hatred" against non-Christians. That interpretation was refuted by the majority of the Supreme Court, as well as by the inscription on the cross stating that it honored "the Dead of All Wars."

On May 20, some volunteers installed a near-perfect replica of the original Mojave Cross. The next day, the Park Service removed it, apparently on orders from the Justice Department, and Obama said nothing.

The Mojave Desert cross is only one of dozens of lawsuits by which atheists are trying to get supremacist judges to expunge all crosses and Ten Commandments monuments from sight. A 29-foot cross on San Diego's Mount Soledad, overlooking beautiful La Jolla, has been in litigation since 1989. This appeal is now before a Ninth Circuit panel consisting of two judges appointed by Bill Clinton and a third appointed by Jimmy Carter, all three of whom have previously issued rulings hostile to religion.

The Christian majority in the United States had better wake up to how their religion is under attack by the U.S. executive and judicial branches of the federal government. Only a new legislative branch elected in November can protect the First Amendment from the atheists.