Will the Real Secretary Geithner Please Stand Up? 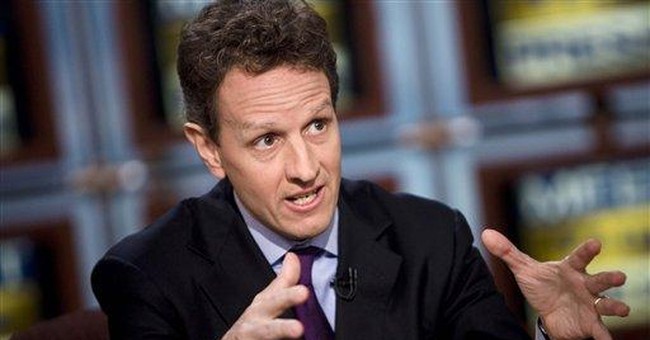 Does Treasury Secretary Timothy Geithner favor replacing the U.S. dollar with a global currency or doesn't he? Or, as Rep. Michele Bachmann, R-Minn., pointedly asked on Sean Hannity's program, "Which Tim Geithner do we believe?"

Let's review the soundbites of the week of March 23.

On Monday, China and Russia urged the world to replace the U.S. dollar as the world's standard with a new currency. This anti-American notion was floated by Zhou Xiaochuan, governor of communist China's central bank, along with urging an increased role for the International Monetary Fund in order to protect world financial markets from the Federal Reserve printing more dollars.

On Tuesday, during a House Financial Services Committee hearing, Rep. Michele Bachmann asked Geithner if he would "categorically renounce the United States moving away from the dollar and going to a global currency," as suggested by China and Russia. He replied, "I would, yes."

Bachmann then asked for confirmation of that reply, and included Federal Reserve Chairman Ben Bernanke, who was also sitting at the witness table, in her question: "You 'categorically,' and the Federal Reserve chair?" Geithner indicated assent, and Bernanke responded, "I would, also."

On Wednesday, during an appearance at the Council on Foreign Relations in New York, banker Doug Smith asked Geithner about China's proposal to replace the dollar as the world's reserve currency. Geithner responded that "we're actually quite open to that suggestion," adding that we should think of it as "evolutionary" and as "building on the current architecture" of the world's currency rather than moving to global monetary union.

Geithner spent the rest of the day trying (as bureaucrats would say) to clarify his remarks while the dollar fell sharply in currency trading. On the Hannity program, Bachmann recited the colloquy and said, "Secretary Geithner has left the option on the table. I want to know which it is. The American people deserve to know."

On Thursday, a United Nations panel of expert economists pressed for a new global currency reserve system made up of dollars, euros, sterling, yen and others. You can bet that any plan concocted by the U.N. that mentions "global equity" will involve more transfers of U.S. wealth to other countries.

By the end of the week, Bachmann had introduced H.J. Res. 41, proposing an amendment to the U.S. Constitution to prohibit the president from entering into a treaty or other international agreement that would provide for the United States to adopt as legal tender a currency issued by any entity other than the United States. She had no trouble attracting co-sponsors.

On the eve of the opening of the G20 Summit in London on April 2, Geithner expanded on his views for "new rules of the game." He said, "Our hope is that we can work with Europe on a global framework, a global infrastructure which has appropriate global oversight, so we don't have a Balkanized system at the global level, like we had at the national level."

It's no wonder that commentators are starting to refer to a possible world currency as the "globo."

Were Geithner's contradictory remarks a gaffe or a political trial balloon? Surely the Obama administration must know that loose talk about a global currency is not acceptable to the American people.

Ever since President George W. Bush went to Waco in 2005 to meet with Vicente Fox and announced the Security and Prosperity Partnership, the Internet and the blogs have been buzzing with speculation about a plan to put the United States into a North American Union along with a common currency already labeled the amero. Government officials and various elites have been issuing impassioned denials that any such plan exists.

But now we have it from our highest financial authority, Geithner, that a world currency is on the table of international discussions. And he implies that we shouldn't be surprised because it is "evolutionary" in our existing financial "architecture."

That is how the Europeans were tricked into the European Union by their governments, mostly without any vote by the people. The EU started out as just a trade agreement, but it evolved into a political union that ultimately replaced national currencies with a common currency called the euro.

Wasn't one of Obama's strong selling points in winning the presidency that he would restore foreign friendship for the United States in the post-George W. Bush era? Now, as Obama plans his first presidential trip overseas, he faces world antagonism not only to America and our foreign policy, but especially to our economic system and to Obama's grand design to use trillion-dollar government spending to promote U.S. recovery.