I Am Woman, See My Boney Head 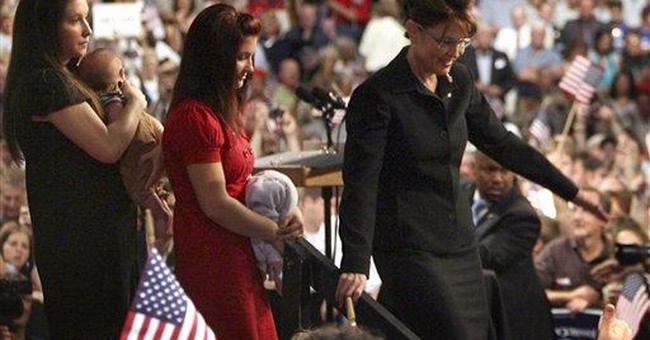 Okay now… take a deep breath, retract the sharp utensils and let the crimson veil subside. I have a few things to say and it would be best to let me live long enough to make my point.

When I heard of Senator McCain’s pick for Vice President, it took me about six minutes to find out that Governor Sarah Palin has a general philosophy about government that coincides with my own, and that she owns a tough leadership style that leads to accomplishment. My initial reaction was a sense of approval.

Yes, I did know during the entire six minutes that Gov. Palin is a woman, but that did not factor into the initial approval equation. I have dealt with and resolved questions in my mind long ago about the ability of women to lead, and it is clear to me that gender in leadership has little to do with anything.

Prime Minister Thatcher, Ambassador Kirkpatrick, and Secretary Rice have proven this beyond a reasonable doubt for me. Janet Reno and Madeleine Albright have proven that women can be just as incompetent as any man in government as well.

The thought process of some women, after hearing of Sarah Palin’s selection to be McCain’s running mate, seems to argue on the side of the sexist attitudes they would portend to resist.

In a New York Times article, we read this…

“Some Clinton stalwarts took offense, saying they felt as if Mr. McCain had decided that, for women disappointed that they could not vote for Mrs. Clinton, any woman would do. 'It’s an insult,' said Jan Roller, a Clinton delegate from Cleveland, as she arrived home from the convention. 'You have to be qualified for the job.'"

“So I was very disappointed” to learn of Mr. McCain’s choice, Mrs. Pace said Friday, hours after the selection of Ms. Palin was announced. “No one in my office has any idea about her, and the only comment I’m hearing, which is not good, is that ‘she’s a woman and that’s why she was picked.’”

…which further leads me to the natural conclusion that women are every bit as capable of being bone-heads as are men. I may be bold enough to say that this attitude borders on being moronic and utterly offensive.

What we have in Gov. Sarah Palin is a born leader. She is sensitive and respectful of America’s conservative roots and of the sacred foundation upon which a society flourishes, the family.

Governor Palin understands the importance of this country’s natural resources and how to preserve the natural beauty while simultaneously using resources that we are fortunate to have. She knows the difference between government serving people and people in servitude to government. Sarah Palin has a full load of common sense and she is not afraid to use it. This is a quality that has reached levels of extinction in Washington D.C., especially evident amongst the parasitical career politicians and bureaucrats that infest the federal government.

So, let me express myself clearly to those who would vote on the basis of gender. The fact that gender even has a check-box next to it on your list of pros and cons makes you a bone-head to begin with. The fact that you would not vote for McCain, because you believe that the Republicans are trying to “trick” you makes you an extra-thick bone-head.

Liberal-afflicted black Americans have been so bone-headed to say that Justice Clarence Thomas and Secretary Condi Rice are not really black because they hold conservative, common-sense, America-first views. I suppose it should not be a surprise to hear that liberal-addled minds believe Sarah Palin is not really a woman.

Governor Sarah Palin is a woman, but she is first and foremost an experienced, proven leader at the executive level of government. She will not stand for corruption, and she will not be beholden to narrow interests, special or otherwise. And yes, that includes the lobby for Unfettered Repro-Destructive Rights of women, that most preeminent cancer on the butt of our social conscience.

There is not a moment’s hesitation on my part regarding the prospect of Sarah Palin taking the reigns of power. If a President McCain were to be stricken for some reason, I would take immense comfort from watching Vice President Palin take the oath according to our Constitution.

If you are inclined to reject the McCain-Palin ticket, on the basis of a woman’s right to have children suctioned from the womb into a jar of bloody goo, then you are beyond hope. Philosophical political disagreements drive our representative system of government. A bone-headed, gender-blinded (not gender-blind) devotion to infanticide threatens to drag us all into the pit, and I have no respect for that whatsoever.