Flashback: Woman Lies About Being Raped to the Senate Judiciary Committee

Phelim McAleer
|
Posted: Oct 02, 2018 1:32 PM
Share   Tweet
The opinions expressed by columnists are their own and do not necessarily represent the views of Townhall.com. 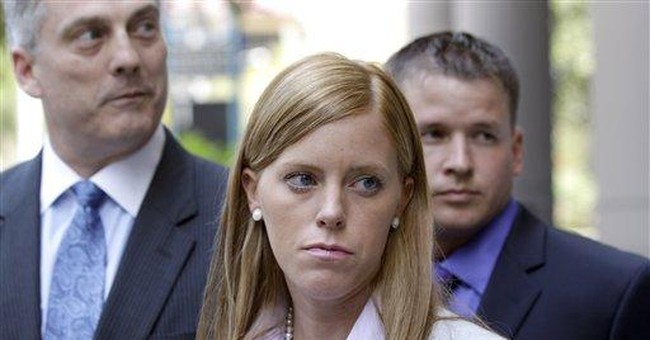 During Christine Blasey Ford’s Senate testimony alleging Brett Kavanaugh sexually assaulted her, Democrats and Republicans largely agreed she seemed to believe her own story. Kavanaugh himself suggested Ford had probably been attacked but denied he was the culprit.

As hard as it is to imagine a woman lying about such a thing, the Senate Judiciary Committee should recall someone lied to them about rape less than 10 years ago. And they completely fell for it.

In 2009, Jamie Leigh Jones told the Committee that four years earlier, on her second night working in Iraq for Halliburton subsidiary KBR (Kellogg, Brown & Root), her drink was spiked at a party and she was gang-raped by a group of Halliburton-employed American firefighters.

She claimed Halliburton locked her in a shipping container with two armed guards who prevented her from contacting anyone in the outside world. She also claimed she convinced a guard to let her use his cell phone to call her father, who alerted his congressman, who organized her escape.

The senators who listened to her story included some still on the Committee -- Feinstein, Klobuchar, Durbin, Leahy, and Whitehouse -- who also listened uncritically to Blasey Ford’s allegations.

In the earlier Jones case, the Committee ignored many red flags.

Jones said her memory was hazy regarding the details of the gang rape but that the next day a doctor examining her at the hospital confirmed multiple assailants. But it is impossible to tell just by looking at someone whether she was attacked by one or many people.

Numerous such flaws in Jones’ story did not stop Congress (championed by Senator Al Franken) from being inspired by her to pass legislation to ensure women in such cases get courtroom trials instead of corporate arbitration.

But during the June 2011 civil trial against KBR, for which she’d fought so hard, Jones was exposed as a possible hoaxer by the adept counterarguments of KBR’s defense attorneys -- as recounted in 2011 by a reporter who’d written sympathetically about Jones back in 2007, Stephanie Mencimer.

In 2011 in the normally hard left Mother Jones and a subsequent 2013 Washington Monthly piece, Mencimer recounted multiple fundamental contradictions that emerged during the trial.

Jones alleged that she was administered a date-rape drug such as Rohypnol, causing her to lose consciousness during and suffer memory loss after the attack. However, promptly after the alleged attack, a fellow KBR employee drove Jones to an Army hospital, where she was examined without any trace of date-rape drugs being found.

Under cross-examination in the trial, a military medical staffer recounted Jones describing another evening, about a month prior to the alleged attack, in which she was uncertain due to inebriation whether she had had sex or not with someone she described as her new partner.

Jones also told ABC News’s Brian Ross that an initial examination showed she had been gang raped “both vaginally and anally” but that the rape kit mysteriously disappeared. Yet only forensics evidence, such as DNA traces, could demonstrate that multiple men were involved, not the doctor’s physical exam alone.

The rape kit evidence, which it turns out had not disappeared, showed DNA from exactly one man, firefighter Charles Bortz, with whom Jones had been seen drinking and flirting throughout the evening before the two of them went back to his quarters, where according to him they had consensual sex. Jones’s lawyer, Todd Kelly, told Mother Jones that despite his client’s belief she was gang raped, no evidence to that effect would be presented to the jury, "as we don’t have the evidence.”

In the trial - with echoes of Dr. Blasey Ford, physician assistant Kristen Rumba testified that when Jones was initially examined, “She seemed to flip-flop back and forth and change her story several times as to how many men were present.”

Court papers show she’d initially brought suit against several “John Doe” rapists -- and intended to show a massive ongoing conspiracy by KBR to cover up assaults. Later, she claimed only one man raped her, but her own father contradicted her, noting that her initial insistence that she had been gang-raped was what helped him get the attention of Rep. Ted Poe of Texas, the man who intervened in the case to expedite her travel back to the U.S.

Asked how long she was in the shipping container, Jones replied vaguely, “I don’t know, but every minute seemed like forever.” Later in the trial, she conceded that she was only in the standard modular shelter for six hours and was free to communicate with the outside world.

Jones also described herself in her complaint against KBR as having been so severely beaten as to suffer damage to her breast implants requiring extensive reconstructive surgery and severe lacerations to her vagina and anus that left her with “blood running down there.”

The medical examiner who saw her immediately after the alleged incident, Dr. Jodi Schultz, by contrast, found no injuries to the chest at all and minor abrasions to the vagina and anus that could have been caused by many things including consensual sex, not just rape, let alone rape by multiple men.

Jones claimed she was psychologically destabilized by the attack, but if the senators had inquired about her life before the attack, they would have discovered she had already been on a variety of drugs for depression and anxiety, as well as having a history of exams for an array of minor physical ailments (and more medication for her physical problems, from spastic colon to STDs), leading some military evaluators to conclude that the stress of military life was getting to her.

Jones had also made prior dubious allegations of sexual assault, including ones against her boyfriend and her boss at KBR. In addition to the allegations against Bortz and her KBR superior, Jones had claimed to be raped on at least three other occasions, including on the stressful day that her parents’ divorce was finalized when she was 16 -- almost as if claims of rape were a way of getting attention.

Jones asked the jury for $145 million in the Halliburton trial. Instead, in a virtually unprecedented decision, the jury found against her and made her pay $145,000 in legal costs to KBR.

Most people watching Professor Blasey Ford relay her story probably thought that no one would possibly lie in such detail and such depth to the Senate Judiciary Committee. The senators on the committee, if they are being honest, could tell America that it is not that unusual.

Phelim McAleer is a journalist and film producer. His film Gosnell - The Trial of America’s Most Prolific Serial Killer, starring Dean Cain and directed by Nick Searcy opens nationwide on October 12th. www.GosnellMovie.com