Promises Made, Promises Broken: The Tale of the 2010 Budget 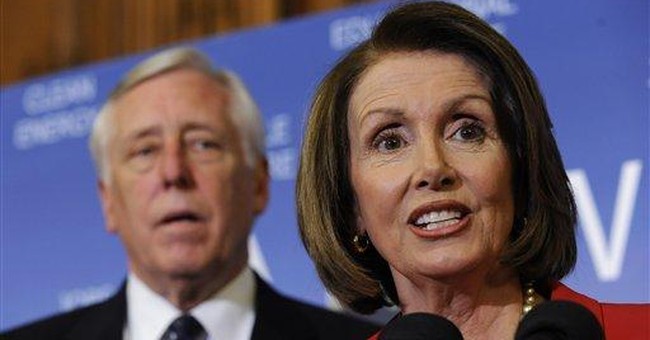 Two years ago, House Speaker Nancy Pelosi made the following statement in an NBC interview with Brian Williams:

“…we'll go forward with civility, with honesty, with integrity and with fiscal discipline. No new deficit spending, no new bridges to nowhere, heaping mountains of debt on our children.”

What a change two years makes.

In fact, in the three short months that Democrats have controlled every corner of Washington, they’ve already borrowed and bailed out more than the combined costs of both wars in Iraq and Afghanistan and the federal response to Hurricane Katrina. Now with congressional approval of President Obama’s $3.5 trillion dollar budget, there seems to be no end in sight.

Meanwhile, American taxpayers are making tough decisions every day to do what they can to cut costs and reduce consumption.  As families and small businesses alike are tightening their belts to account for the worsening economy, they have every right to ask: “Why isn’t my government doing the same?”

Unfortunately, the Budget that President Obama and House Democrats have resolved to shove down hard-working Americans’ throats is laden with bloated government-run programs, threatens tax increases on all Americans—not just the wealthiest two percent—and promises to produce $9.3 trillion in deficits over the next decade.

Pstarresident Obama should take a cue from Robert Samuelson, who wrote in The Washington Post : “A prudent president would have made a ‘tough choice’—concentrated on the economy; deferred his more contentious agenda.” Instead, the Obama budget is a blueprint for higher taxes, more government spending, and deeper deficits.

The House Republican Budget would provide a much different blueprint. Our budget curbs spending, creates jobs, lowers taxes, and controls the debt.  To put it simply: it aims to end the “Pelosi Recession,” not prolong it as the Democrat budget does.

The budget plan Republicans have presented would limit the federal budget from growing faster than family budgets and stop the spend-thrift habits to which the Democrats have become accustomed. As the Party of Ideas, we have put together a plan that would rein in reckless spending and put us back on track to economic growth. The United States can no longer rely upon foreign nations such as China to bail us out of our economic irresponsibility.  We must live within our means and implement creative, free-market solutions to put Americans back in jobs and to create economic opportunities.

House Republicans understand that our nation cannot lay a foundation for prosperity by tripling our deficit and saddling future Americans with debt and broken social programs. That is why Republicans stand united in protecting the American taxpayer’s interest, unanimously voting against the Democrats’ irresponsible budget—along with 20 Democrats who joined us in bipartisan opposition to Pelosi’s radical agenda.

Americans know that we cannot tax and spend our way out of a recession, yet Democrats can’t grasp this simple fact. Rather, Democrats in Congress are laying the budgetary groundwork for President Obama to move forward with his tax-and-spend agenda.

History shows that tax increases during a recession are a recipe for greater unemployment and economic loss. When we’re looking at an Administration that has, as The Washington Examiner points out, “rolled out a $2 trillion financial services bailout, a $788 billion stimulus package, the $13.4 billion preliminary bailout for automakers, a $410 billion spending plan to cover the rest of the current fiscal year, a proposed $275 billion foreclosure rescue plan, and a $3.5 trillion budget that includes a $634 billion fund for healthcare,” Americans must wonder: “What happened to the President’s campaign promises of fiscal responsibility?”

No wonder the President and Democrat-controlled Congress are seeking to divert the American people’s attention away from their reckless spending spree, futilely labeling Republicans as the party of “no” and denying the existence of our alternative solutions. The American people are not fooled.

The Wall Street Journal recently noted that even if the government were to seize the wealthiest taxpayers’ entire income, it still would not be enough to cover the entirety of the President’s spending ambitions.  We can only continue deficit spending, financed by China and other foreign countries, for so long.

Furthermore, noted liberal finance commentator Jim Cramer  recently opined on his Web site, TheStreet.com, that “all the initiatives [President Obama] wants to rush, like tax hikes, changes in health care, tinkering with the mortgage deduction -- good grief, right now in the midst of the worst housing downturn ever -- and the tough cap-and-trade rules, will derail any chance we have of turning this economy around. Instead, they put the Second Great Depression smack on the nation's table.”

The 100+ million Americans who are represented by Republicans in Congress did not elect us to stand idle as Democrats legislate away their life savings. They brought us here to fight for their best interests in Washington and to ensure a bright economic future for their children.

My Republican colleagues and I are ready to take the President up on his offer to go line-by-line through the Federal Budget.  We understand that eliminating wasteful and ineffective programs is a good first step towards streamlining our finances and laying the groundwork for a fiscally-sound future.

It’s past time for Democrats to live up to the promises of fiscal responsibility—to put aside their radical tax-and-spend agenda and to work with Republicans to put forward fiscally-sound solutions to the challenges we face. The American people deserve better.