The Economic Futility of Allowing Logging in Tongass National Forest

Pete Sepp
|
Posted: Mar 21, 2020 12:01 AM
Share   Tweet
The opinions expressed by columnists are their own and do not necessarily represent the views of Townhall.com. 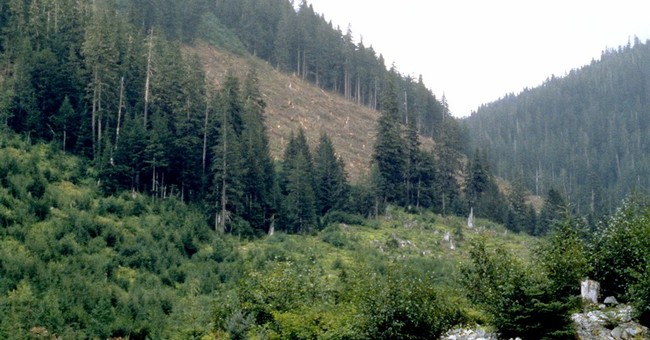 Thirty million dollars would make anyone sit up and pay attention, especially when the words following include “the government” and “taxpayers.” But is $30 million each year what it costs to maintain the protection of a federally designated national forest?

Surprisingly, no. This average annual loss of $30 million stems not from protecting the forest, but logging the forest, Southeast Alaska’s Tongass National Forest in particular. That’s equivalent to over $100,000 per timber job in the area.

When the current administration announced its intent to modify the protections of the “Roadless Rule” that restricts logging in over 9 million acres of the 16.7 million acre Tongass National Forest, some Americans might have cheered the move as regulatory reform. While plenty of environmental edicts are already straining the nation’s finances, rolling back the Roadless Rule could actually swell America’s bloated debt stomach, resulting in a new heaping plate of government costs.

According to findings produced by our colleagues at Taxpayers for Common Sense (TCS), based in part on Government Accountability Office research, the U.S. Forest Service (USFS) has lost nearly $600 million over two decades through roadbuilding and timber sales – an average of $30 million every year. As TCS explained:

"Every year, the USFS prepares and conducts sales for the rights to harvest millions of board feet of timber from the Tongass. These sales have historically generated less revenue than the USFS spends to administer them, resulting in large net losses for U.S. taxpayers. New budget data reveal that the USFS has continued to lose millions of dollars on Tongass timber sales in recent years."

Why has this happened? Even those in the timber industry who dispute the use of the term “subsidy” to describe what’s going on acknowledge the federal government has a lot to learn about controlling forest management costs. As a leader of the Alaska Forest Association put it several years ago, “The Forest Service cost of preparing timber sales is very high compared to what the State [of Alaska] spends preparing their timber sales, but that is a management issue, not a subsidy. …The agency does a good job growing trees; they just spend too much money.”

Writing for the Cato Institute, Randal O’Toole put a finer point on the problem by noting early on that “the more damage timber sales created the larger were the budgets that managers got to control. Every level of the agency’s hierarchy had a stake in the below-cost timber sale program because as much as a third of the funds went for agency overhead.”

Those dismal incentives are not likely to improve if more federal roadbuilding to access logging sites – which already accounts for a good 40 percent of the government’s costs – is encouraged in the Tongass. After all, Taxpayers for Common Sense projects that over the next four years, the USFS could end up losing more than $180 million from the existing timber operation. Lifting the Roadless Rule will add more than 9 million acres to the areas that could be logged, and with it the prospects for super-sized taxpayer liabilities.

Despite federal managerial shortcomings, the Tongass has provided impressive economic returns in other ways. Tourism, fishing, and hunting industries amount to 26 percent of the local economy of Southeast Alaska, far more so than timber harvesting provides. Most notably, salmon harvested from within the rivers flowing throughout the Tongass provide for 28 percent of the commercial salmon harvest across the entire state, with the Alaskan fishing industry yielding $986 million annually. On top of all of this, the Tongass itself provides for over 10,000 jobs for Alaska residents.

Taxpayers should not oppose all logging in the Tongass; they simply deserve better federal policy than throwing good money after bad. Environmental reviews for commercial operations can be streamlined, access to existing forest roads should be rationally priced, and successful private-sector management techniques should be implemented.

Until these steps are taken, however, the Roadless Rule will have to suffice in limiting the damage to taxpayers’ wallets. For now, the benefits of maintaining an ecosystem that’s profitable for several economic sectors outweigh the costs of expanding a proven government money-loser targeted at one sector.

Pete Sepp is President of National Taxpayers Union, a nonpartisan citizen group founded in 1969 to work for lower taxes, less wasteful government spending, and taxpayer rights at all levels.