Pete Sepp
|
Posted: Dec 11, 2019 12:01 AM
Share   Tweet
The opinions expressed by columnists are their own and do not necessarily represent the views of Townhall.com. 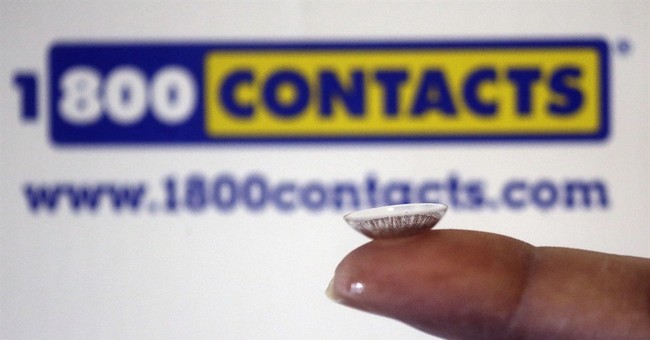 The machinery of the American government tends to move at a moderate speed – and usually, that’s a good thing. It allows policy decisions to be made with deliberation and input from all those affected. The trouble comes when a few, seeking an advantage over everyone else, attempt to stop or even reverse that machinery. So it is with the right of Americans to choose how they purchase contact lenses – and in the process, consumers’ and taxpayers’ wallets could be ground up in the gears. Leaders in Washington have an opportunity right now to prevent this from happening.

The Federal Trade Commission (FTC) has not always been a friend of free markets, but in the case of vision care the agency has admirably led from the front. In the late 1970s, an FTC rule finally dislodged crony-capitalist state regulations forbidding advertising for eyeglasses. In 2004, following Congressional passage of the Fairness to Contact Lens Consumers Act, the FTC implemented sensible, balanced rules that give patients the right to a copy of their vision prescription, so they can shop for glasses and contacts at an optometrist, a qualified retailer, or an online provider.

Taxpayers have a major stake in contact lens choice. After all, we cover over 80 percent of state and more than 70 percent of federal government employee health insurance costs, which, combined, well exceeds $70 billion annually. Most of these arrangements offer some kind of vision coverage. And even though Medicare and Medicaid generally don’t pay for contacts, making sure patients have options for lenses on their own can prevent bigger medical problems that those two programs might have to cover. Equally important, the type of technologies that contact lens choice has encouraged – like online eye exams – has spurred cost-saving innovation in telemedicine for government programs that serve veterans, native Americans, and rural communities.

For reasons like these, a coalition of citizen groups including National Taxpayers Union has been urging FTC to complete a required review and update to its Contact Lens Rule – a process the agency initiated over four years ago. Few FTC rules have followed such a tortuous path, but for perspective, consider that in 2018, the agency commendably launched a massive initiative examining the current state and future mission of everything FTC does – including consumer protection, competition policy, and litigation. A total of 14 sessions with dozens of experts, involving hundreds of filed public comments on 11 separate topics were held, giving FTC a treasure trove of guidance that will, along with Congressional direction, help to chart the agency’s course for years to come. All this was accomplished in a period of 10 months. In contrast, the Contact Lens Rule update has been trapped in bureaucratic muck for nearly 51 months.

A protectionist piece of legislation in Congress could actually deepen this muck. House Members Bobby Rush (D-IL) and Michael Burgess (R-TX) have authored a bill to roll back current prescription verification procedures that allow customers to purchase lenses from a licensed outlet other than their examining optometrist. Anyone in the Senate thinking of authoring a companion to this wrongheaded legislation needs an examination of a different kind.

Who helped create this quagmire from outside government? None other than an association of optometrists, who apparently believe that turning back progress on the Contact Lens Rule will preserve its members’ interests in the effectively exclusive store-front selling market they had before Internet retailers came along. One of their key arguments – besides raising bogus fears over patient health – is that FTC’s proposed update to the Contact Lens Rule, which includes a new short procedure for notifying customers of their prescription rights and maintaining a record of doing so, imposes too much paperwork.

Optometrists have legitimate concerns over government burdens on their practices, but those concerns shouldn’t be misplaced by a near-obsessive focus on blocking the Contact Lens Rule update. Instead, FTC should approve the update and provide relief for other, substantive problems optometrists have, such as the patchwork of licensure laws that hamper them from doing business with customers across state lines. Meanwhile, crushing paperwork loads on optometrists from the federal HIPAA law should be reexamined, as well as the monstrous complexity of the federal income tax system.

Equally important, however, Congress shouldn’t make matters worse by interfering with sensible modernization of the Contact Lens Rule. The machinery of change has run for four years – throwing another wrench in the works now will only hurt the taxpayers and consumers whom public officials claim they want to protect.

Sepp is President of the National Taxpayers Union (ntu.org), a nonpartisan citizen group founded in 1969.