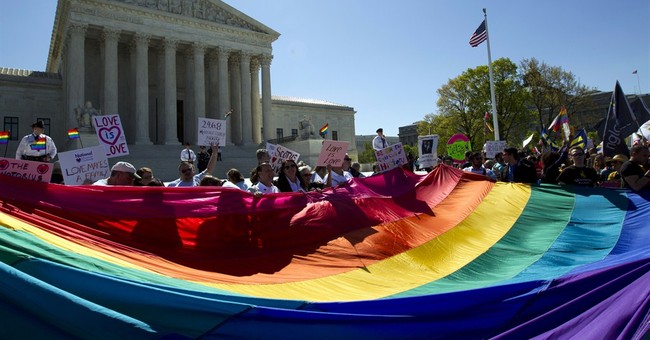 June 12 has been dubbed “Loving Day.” It commemorates the anniversary of a Supreme Court decision—in the 1967 case of

Advocates for redefining marriage to include same-sex couples argue that this case is precedent for striking down state laws that define marriage as the union of a man and a woman.

It is worth reading an extended excerpt from the court’s decision in Loving. This was the conclusion (citations omitted) of the Court’s Equal Protection analysis:

The clear and central purpose of the Fourteenth Amendment was to eliminate all official state sources of invidious racial discrimination in the States.

There can be no question but that Virginia's miscegenation statutes rest solely upon distinctions drawn according to race. The statutes proscribe generally accepted conduct if engaged in by members of different races. Over the years, this Court has consistently repudiated "[d]istinctions between citizens solely because of their ancestry" as being "odious to a free people whose institutions are founded upon the doctrine of equality." At the very least, the Equal Protection Clause demands that racial classifications, especially suspect in criminal statutes, be subjected to the "most rigid scrutiny," and, if they are ever to be upheld, they must be shown to be necessary to the accomplishment of some permissible state objective, independent of the racial discrimination which it was the object of the Fourteenth Amendment to eliminate. Indeed, two members of this Court have already stated that they "cannot conceive of a valid legislative purpose . . . which makes the color of a person's skin the test of whether his conduct is a criminal offense."

There is patently no legitimate overriding purpose independent of invidious racial discrimination which justifies this classification. The fact that Virginia prohibits only interracial marriages involving white persons demonstrates that the racial classifications must stand on their own justification, as measures designed to maintain White Supremacy. We have consistently denied the constitutionality of measures which restrict the rights of citizens on account of race. There can be no doubt that restricting the freedom to marry solely because of racial classifications violates the central meaning of the Equal Protection Clause.

Literally every sentence in this passage—ten in a row—makes reference to concepts such as “race,” “ancestry,” or “the color of a person’s skin.” This should be sufficient to demonstrate that Loving was not based on a generalized right to marry “the person of your choice,” but was rather based specifically on the Constitution’s clear prohibition of state-sponsored discrimination based on race.

Advocates for redefining marriage have also argued that same-sex couples have been denied the “fundamental right to marry.” Here is the conclusion of the Court’s analysis of the “freedom to marry” in Loving:

To deny this fundamental freedom on so unsupportable a basis as the racial classifications embodied in these statutes, classifications so directly subversive of the principle of equality at the heart of the Fourteenth Amendment, is surely to deprive all the State's citizens of liberty without due process of law. The Fourteenth Amendment requires that the freedom of choice to marry not be restricted by invidious racial discriminations. Under our Constitution, the freedom to marry, or not marry, a person of another race resides with the individual and cannot be infringed by the State.

This part of the opinion, too, makes reference to “racial classifications” and “invidious racial discriminations.” There is thus no reason to believe that Loving forbids classifications on some basis other than race.

Numerous courts considering same-sex “marriage” lawsuits have rejected the Loving analogy. The judge in a 2003 Indiana case (Morrison v. Sadler) noted, “Anti-miscegenation laws, because they interfered with the traditional marriage relationships in pursuit of opprobrious racial segregation policies, had no legitimate connection to the institution of marriage itself.”

A Superior Court in New Jersey came to a similar conclusion in a similar case (Lewis v. Harris) in 2003:

These decisions derive from Constitutional amendments prohibiting racial discrimination and subjecting laws that classify individuals based on race to the highest level of scrutiny. No similar Constitutional provisions outlaw statutory classifications based on sexual orientation.

In November 2014, a panel from the U.S. Court of Appeals for the Sixth Circuit upheld one-man-one-woman marriage laws in Michigan, Ohio, Kentucky, and Tennessee. It is the appeal of these cases which is now before the Supreme Court.

The Sixth Circuit panel noted another compelling reason for questioning whether Loving provides a precedent for allowing same-sex couples to legally “marry.” In 1972, a case out of Minnesota (Baker v. Nelson), making the same claims for same-sex “marriage” now being asserted, was appealed to the Supreme Court. Five years after Loving, it dismissed the case “for want of a substantial federal question.”

The clear purpose of the bans on interracial marriage was to build walls between two groups of people in society, blacks and whites. Such laws were designed to reinforce a system of racial segregation, keeping the races apart from one another.

In contrast, defining marriage as the union of male and female has exactly the opposite intent and effect. Rather than building walls between two classes of people, it creates a bridge across the most fundamental gap in humanity—the gap between male and female. Unlike laws against interracial marriage, defining marriage as a bridge between the sexes is something common to all human civilizations, and serves the good of society.