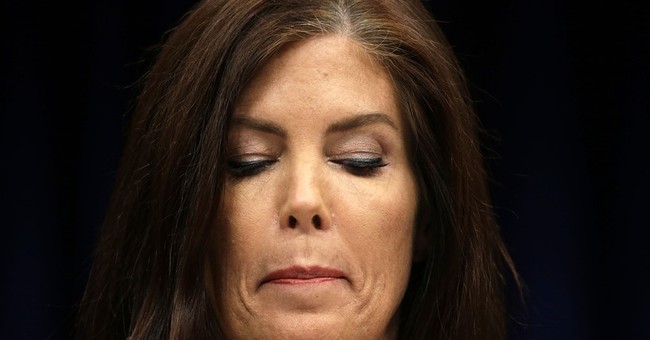 The first woman – and first Democrat ever elected attorney general of Pennsylvania -- had a bright future ahead of her. The darling of liberals she was a powerhouse at the polls. She led the statewide ticket in 2013 and her election was seen by many as a stepping stone to the governor’s mansion, the U.S. Senate or something even more prestigious.

Her career is now in ruins. How she fell so far and so fast is an object lesson for ambitious prosecutors in both parties who feel tempted to use the power of their office to play politics.

Kane was elected largely because of her pledge to review the investigation that destroyed the reputations of the vaunted Pennsylvania State University football program and its longtime coach, the late Joe Paterno. The case, with which everyone in the state was familiar, included charges and counter-charges that favoritism had been shown and political cover granted to some even while former Assistant Coach Jerry Sandusky was being led to the figurative gallows.

Her review yielded no new information; in fact, it found no evidence to suggest, as she had charged while campaigning, that former GOP Attorney General Tom Corbett had dragged out Sandusky’s prosecution because he was running for governor. At one point she asserted delays in the case allowed Sandusky the opportunity to assault two additional children – a claim her office later retracted.

Kane also shut down a high-profile corruption probe while alleging racism played a role in the decision to launch an investigative sting. The case, which started under Corbett and continued under appointed A.G. Linda Kelly involved eight people including four members of the state legislature (all Democrats) and a state traffic court judge.

The racism charge raised the hackles of many, including Philadelphia District Attorney Seth Williams who suggested it was a preposterous idea. It should be noted that working for Williams as he pursued the investigation Kane stopped was Frank Fina, a one-time chief deputy to the attorney general who quit the AG’s office after Kane shut the corruption inquiry down to join Williams’ staff.

During her run for A.G., Kane not only accused Corbett of playing politics with the Sandusky investigation – she accused Fina as well. Apparently Kane considered Fina someone who needed to be taken down a peg to blunt any criticisms he might make of her. According to various Pennsylvania news outlets she orchestrated the leak of secret grand jury material to at least one reporter in an effort to make her look better and her “foes” look worse.

If true, this is at best an example of poor judgment At worst it’s a crime, which is now something for the courts to decide. On August 6, Kane was indicted by Montgomery County, Pa., District Attorney Risa Vetri Ferman on criminal charges including obstructing administration of law or other government function, official oppression, criminal conspiracy, perjury and false swearing.

Her primary defense, as she explained in a Friday press conference, is that she is a threat to the establishment and is innocent. As she told reporters, “My defense will not be that I am the victim of some good old boys network; it will be that I broke no laws of the Commonwealth.”

Ferman’s indictment, however, tells another tale. Kane seems to have allowed her ambition to go to her head, exhibiting judgment that was prejudicial to the proper administration of the law in Pennsylvania. Her indictment shows she lacks the moral center necessary to be the state’s top legal officer.

These visible signs of Kane’s troubled tenure imply that more rot may lie below the surface. It is now imperative to investigate the way her office conducted its business during the brief time she has been in charge. Allegations have been made that plaintiffs’ attorneys – who as a class are very generous contributors to the Democratic Party -- have been deputized to act as de facto agents of her office. Meanwhile she’s facilitated no-bid contracts for legal work, which in turn are being used as an opportunity to push legal and social agendas that are better left to the handling and wisdom of the legislature.

All this needs to be reviewed.

Kane may be unwilling to resign, indeed cannot be forced to but this does not mean she should be left to her own devices. The legislature would be wise to launch a special committee to conduct a review of her awarding of contracts and her decisions to prosecute (or, as the case may be, not prosecute) cases involving things like official corruption and supervise her actions closely until she has her day in court.

In addition Gov. Tom Wolf, a fellow Democrat, would be wise to appoint a special adviser to his own staff to monitor her activities. He’s already called on her to step down. Having someone in his office looking over her shoulder all the time may help her understand it is time for her to go. This is not a partisan issue; this involves the worst kind of corruption: the abuse of the power of her office. She needs to be made an example of for the rest of the nation.