Where are the jobs? America’s new leisure class 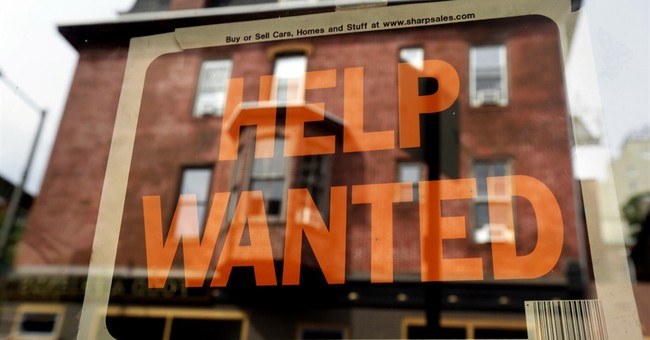 To listen to President Obama, the U.S. economy is firing on all cylinders. Yet it is hardly creating jobs at a breakneck pace, and too many able-bodied men have grown lazy and show no interest in working.

Friday, economists expect the Labor Department to report 230,000 jobs were added in February—down from 336,000 averaged the prior three months. Economists at Wells Fargo expect the pace for the entire year to be only 224,000.

The culprits remain slow growth, and Obama’s attempts to remedy income inequality with government programs that fail to lift millions of Americans to dignified work.

Since the recovery began, the economy has averaged 2.3 percent GDP growth and created 183,000 jobs per month. Adjusting for a smaller economy in the 1980s, the Reagan recovery accomplished twice that progress.

The headline unemployment rate has fallen to 5.7 percent, but more than 10 million men between the ages of 25 and 64 have no job and make no effort to find one.

Indolent men will create major problems for Obama’s successors as fewer workers will be paying taxes to support Social Security, Medicare, Obamacare, and other entitlements as productive baby boomers retire.

Obama has made abuse of federal disability programs, easy access to free health care and food stamps and other benefits programs, and mooching off girlfriends, wives and other relatives, a reasonable alternative to work.

Some operate in the grey economy—illegally swapping services for in kind income such as free rent—but most form the new leisure class that watch endless analyses of college basketball and NFL matchups on ESPN.

Simply, too many prime working age men—many with college diplomas and work experience but who lost higher paying jobs during the recession—have determined it is either unprofitable, beneath their dignity or too inconvenient to get up off the couch and look for gainful employment.

Historically, young people entered the job market through the retail, restaurant and hospitality industries, and then went on to better paying positions as they completed their education or developed marketable skills on the job.

Now many appear permanently locked into those low-paying jobs, as opportunities in manufacturing, construction and finance become scarcer.

Another problem is that many young people gained little more than a huge student debt from four years at college.

Much has been made of the folly of majoring in Peace Studies and Art History at second- tier colleges and universities, but four in ten college graduates lack critical thinking, analytical reasoning, literacy, and communication skills necessary to perform reasonably well-compensating white collar work.

Those are skills colleges are supposed to impart and degrees should certify, but neither is any longer true.

Obama has used Pell Grants and students loans to enroll large numbers of dysfunctional and academically unqualified adolescents at community colleges and second tier universities, and kept them out of the job-seeking population for the purposes of computing the official unemployment rate.

Many college graduates will remain barristers because their degrees are fraudulent, and they will eventually default on their student loans. Fortunately for the ever boastful Obama, the collapse of the $1 trillion plus student debt pyramid will come after he leaves office.

Ah, the best of all possible worlds. Young and aging men dependent on government largess and more inclined to vote for Democrats to continue the gravy train of free stuff, and falling unemployment numbers to tout from the Rose Garden.

One thing for sure, America can boast the first civilization in history with a leisure class at the bottom.

Peter Morici is an economist and professor at the Smith School of Business, University of Maryland and a national columnist. Follow him on Twitter @pmorici1.