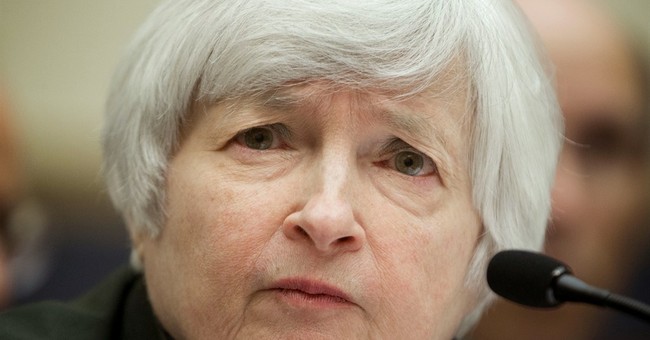 Testifying before Congress last week, Federal Reserve Chairman Janet Yellen cherry-picked data on inflation by noting prices are up, on a year-over-year basis, less than the Federal Reserve's target of 2 percent.

The Labor Department's Consumer Price Index has accelerated recently and averaged 3.5 percent for the three months ending in June.

Once inflation gets out of control, history has shown it is difficult to contain without a steep and painful recession. Recognizing these dangers, Ms. Yellen's cognitive dissonance will add new life to proposals in Congress to rein in the Fed's independence.

A bill under consideration would require the Fed to submit to Congress a detailed strategy or rule for the Fed's policy instruments — for example, targets for money-supply growth and lending rates to banks — and essentially handcuff quick Fed responses to emerging crises.

The Dodd-Frank legislation was intended both to curb destabilizing practices on Wall Street and to permit the Fed to better respond to crises — for example, the 2008 Lehman Brothers collapse, which in the absence of Fed intervention, caused the house of cards that was mortgage-backed securities to collapse and ignited the worst financial crisis since the Great Depression.

The Fed's credibility is already suffering greatly from the ill-considered actions of former Chairman Ben S. Bernanke and former Treasury Secretary Timothy F. Geithner. Together, they bailed out the biggest financial firms but largely left top officials — with the exceptions of those firms seized by the federal government — to continue to find creative ways to gamble and pay themselves outlandish bonuses. For example, although banks don't directly make private equity plays, they are financing those at alarming levels through questionable lending.

Instead of restoring Glass-Steagall and breaking up the biggest banks to a scale not too big to fail, they supported legislation to expand their regulatory empires with Dodd-Frank's costly regulations. Compliance costs are a big reason why ordinary folks are losing free checking and paying generally higher service fees.

Now, Ms. Yellen is ignoring the Fed mandate to ensure price stability. She has embraced the notion that if she induces enough inflation — in Fed parlance at least 2 percent per annum — the economy will grow more robustly.

That view has lots of support among politically liberal economists who offer little credible evidence. Yes, economists actually have rules for the abuse of statistics.

Letting inflation fly, and fibbing about it, seems to be Ms. Yellen's imprint on Fed policy, but it will likely impose devastating costs on ordinary Americans.

Labor markets are tight for specialized technical personnel, such as in the medical, oil and gas, advanced manufacturing and technology sectors, but most Americans can't get a decent raise because few seem able to leave their current employer for better pay elsewhere.

Boosting inflation to chase growth by printing money to keep interest rates low will make bankers and private equity firms happy — and they donate considerable sums to Democratic candidates — but it will beat the heck out of the finances of ordinary Americans.

If Ms. Yellen can't run the Fed responsibly and at least acknowledge the inflation data on her desk, the Congress will leash monetary policy in ways that make future crises a lot worse.

In the days before the Fed was established, the absence of a strong central bank with flexible powers exacerbated crises and made the economy inherently unstable, and that is where Ms. Yellen's inaction on inflation could well take us.

Peter Morici is an economist and professor at the Smith School of Business, University of Maryland, and widely published columnist and five time winner of the MarketWatch best forecaster award. Follow him on Twitter @PMorici1