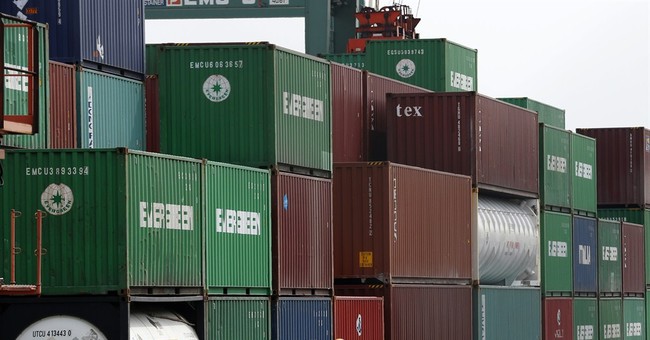 Tuesday, the Commerce Department reported the March deficit on international trade in goods and services was $40.4 billion. Overall, the deficit is up from $25 billion since the economic recovery began in mid-2009, and poses a significant barrier to stronger economic growth.

Household spending has recovered but too many of those dollars go to pay for imported oil, consumer goods from China and autos from Japan.

Consequently, businesses remain pessimistic about demand for domestically produced goods in the U.S. market and are reluctant to invest. With the majority of U.S. businesses subject to higher personal, as opposed to corporate tax rates, more onerous and costly regulations and paying more for employee health insurance, they remain reluctant to hire workers and continue to rely on offshore jobs.

Fracking in the Lower 48 has not delivered enough new oil—the United States still imports about 5.3 million barrels a day.

A full push on U.S. potential in the Gulf, off the Atlantic and Pacific Coasts and in Alaska would add 4 million barrels a day to domestic production. Shifting federal subsidies from electric cars, wind and solar to more fuel efficient internal combustion engines, plug-in hybrid vehicles and liquefied natural gas in rail and trucking could slice another 1 or 2 million barrels a day off U.S. demand and eliminate dependence on imported oil altogether.

Lower natural gas prices have substantially improved the international competitiveness of industries like petrochemicals, fertilizers, plastics, and primary metals. However, the Department of Energy’s push to boost liquefied gas exports will handicap growth and create millions fewer jobs than keeping the gas at home for manufacturing and alternatives to diesel in transportation.

China systematically undervalues currency against the dollar to keep its goods cheap in U.S. stores. It systemically steals technology, subsidizes exports and imposes high tariffs on imports, while effectively distracting the Obama Administration from these commercial issues with persistent intransience on cyber-security and incursions on the sovereign waters of American allies in the Pacific.

Other Asian governments, most notably Japan, have adopted similar currency strategies to boost exports. For example, the jump in the value of the dollar against the yen gives Toyota at least a $2000 advantage pricing of the Camry against the Ford Fusion. That may not show up in the list price but it gives Toyota’s importing arm in the United States the latitude to pack cars with better features, more aggressively discount and spend more on new and more innovative products.

Economists across the ideological and political spectrum have offered strategies to combat predatory currency policy and force China and others to abandon mercantilism. However, China, Japan and others, offering only token gestures and deflecting rhetoric, exploit President Obama’s weakness on economic issues—the Obama policy of appeasement handicaps the U.S. recovery.

Cutting the annual trade deficit by $300 billion, through domestic energy development and conservation, and forcing China and others’ hands on protectionism would increase GDP by about $500 billion a year and create about 5 million jobs.

Cutting the trade deficit in half would raise long-term U.S. economic growth by one to two percentage points a year. But for the trade deficits of the Bush and Obama years, U.S. GDP would be 10 to 20 percent greater than today and unemployment and budget deficits not much of a problem.

Peter Morici is an economist and professor at the University of Maryland Smith School of Business, a national columnist and five time winner of the MarketWatch best forecaster award. Follow him on Twitter @PMorici1.