Failure on a Massive Scale

Peter Mihalick
|
Posted: Apr 03, 2021 12:01 AM
Share   Tweet
The opinions expressed by columnists are their own and do not necessarily represent the views of Townhall.com. 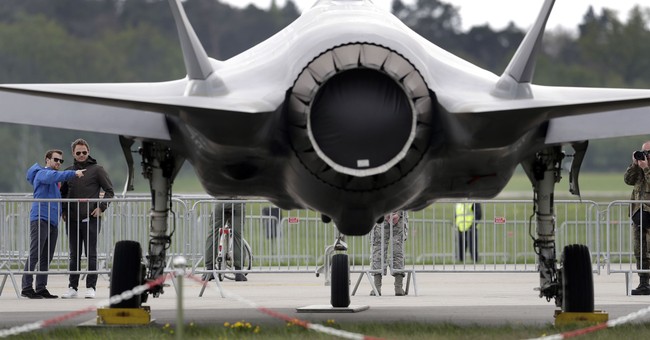 “Failure on a massive scale” – that’s what one Member of Congress called the F-35 Joint Strike Fighter program. The Department of Defense (DoD) markets the F-35 as a stealth fighter jet that can do it all. The real truth is the project is an abysmal waste of money which does not work as advertised. Both parties, for once, need join together in a bipartisan manner to stop the crony capitalism which has led the Pentagon to allow the taxpayers to be ripped off.

Congress needs to find ways to terminate the F-35 program today. The program is a money pit that increases deficit spending without actually materially aiding in the defense of the United States. The DoD shoulders much of the blame for allowing contractors to fleece the Department and strain the budget when there are so many other priorities in need of resources. While the Pentagon looks to supply the Space Force and bulks up missile defense capabilities, the F-35 is a line item for dollars that should be going to these and other Pentagon programs.

The Congressman who uttered the phrase “failure on a massive scale,” is Rep. Adam Smith (D-WA) – the Chairman of the House Armed Services Committee. He would not be labeled a conservative by any stretch, but he recognizes this is a simple good governance issue. Chairman Smith was quoted in Defense News as saying, “what does the F-35 give us? And is there a way to cut our losses? Is there a way to not keep spending that much money for such a low capability because, as you know, the sustainment costs are brutal.”  He accurately described the program as a “rathole” for the taxpayer and it is time for both parties in the annual exercise of funding the government to take this program behind the Congressional barn and put it out of its misery – for the sake of the taxpayer.

It is refreshing to see a highly ranked Democratic member of Congress leading a cause to protect the taxpayer. Back when President-elect Donald J. Trump was preparing to take office, he tweeted, “the F-35 program and cost is out of control. Billions of dollars can and will be saved on military (and other) purchases after January 20th.” That occurred in 2016, yet the contractor is so good at playing the inside lobbying D.C. Swamp game that they have survived for the last four years. Those contractors are likely to continue to get hundreds of billions to fund this defective aircraft because they know how to outflank the Chairman of the powerful House Armed Services Committee.

Several experts in warfare believe this program itself is a national security threat.  Sean McFate, author of five books and a Georgetown University professor wrote in The Hill recently, “the F-35 is an allegory for everything that’s broken in our Department of Defense, which receives more money than the rest of the federal interagency, combined. In fact, we spend more on our armed forces than the next 10 biggest militaries in the world, combined.” McFate argues, “the F-35 is the most expensive weapon in history, with a projected lifetime cost of $1.7 trillion. That’s more than Russia’s GDP, all spent on a single-seat plane.” He claims that if the F-35 were a nation, it would rank 11th in the world in GDP. The expense for flying it is about $44,000 per hour, “more than twice the cost of the F-15 Eagle, F-16 Fighting Falcon and F/A-18 Super Hornet.” In other words, this program is too expensive, and America would be better off with an Air Force filled with reliable, capable, battle tested aircraft.

The issues with the developed of the F-35 are numerous. For a fighter, the F-35 is not all that good at battling other aircraft. The technology is substandard and there is a problem procuring spare parts. The designers and manufacturers attempted to make it a multi-mission aircraft – capable of dropping bombs, espionage, and, of course, engaging in other aircraft - it seems that this fighter jet is destined for the scrap heap because it cannot do any of those missions better than existing planes already in service.  The only thing the F-35 has shown to be able to do is continue to receive money from the government and be a sinkhole for hundreds of billions in sunk taxpayer cost.

Chairman Smith and President Trump were right to point out the deficiencies and the costs associated with the F-35 program. Now is the time for bipartisan Congressional action to do something about it.