Pedro Gonzalez
|
Posted: Jun 19, 2020 12:01 AM
Share   Tweet
The opinions expressed by columnists are their own and do not necessarily represent the views of Townhall.com. 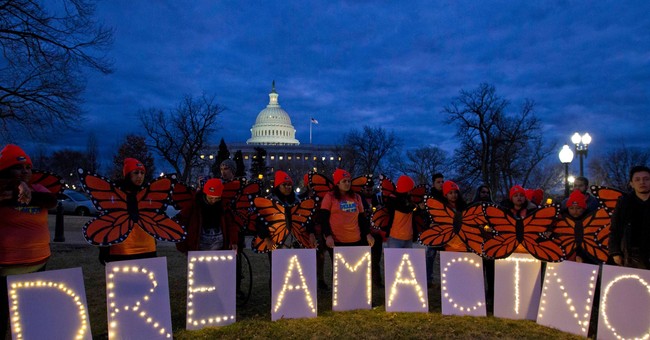 In the days leading up to the Supreme Court's decision to protect the Deferred Action for Childhood Arrivals (DACA) program, the media engaged in a campaign to manufacture public consensus in favor of amnesty. Though it does not validate the program, the court's ruling amounts to a blow in favor of those pining for permanent legal status for DACA recipients.

Polls routinely attempt to create the illusion of support for DACA amnesty through biased or misleading questions or omitting information. For example, Politico reported on Wednesday that a majority of Trump voters "want to protect so-called Dreamers from deportation, according to a new poll, putting pressure on President Donald Trump to shield immigrants who were brought to the country illegally as children."

A DACA amnesty package would apply to at least 800,000 people.

Here is the question respondents were asked for the Politico article: "As you may know, Dreamers are young people who were brought back to the United States illegally when they were children, often with their parents. Which of the following do you think is the best way to handle Dreamers?"

CBS News ran a similar poll, also concluding "large majority of Republicans, as well as almost all Democrats, favor allowing immigrants brought into the U.S. illegally as children to stay." CBS asked: "In general, do you favor or oppose allowing young immigrants who were brought to the US illegally as children to remain in the country if they meet certain requirements such as going to school or joining the military, and not having a criminal record?"

Neither survey mentions the number of people eligible for amnesty. Asking Americans if they want legal status for hundreds of thousands of adults—the average age of a DACA recipient was 25 years old in 2017—might elicit different responses. A closer look at the group would likely cause the average American to reject amnesty out of hand.

DACA recipients must have no felony convictions, no significant misdemeanors or three or more other misdemeanors, and must not pose a threat to national security or public safety. Thousands qualify for the program despite failing to meet these requirements.

In November 2019, U.S. Citizenship and Immigration Services (USCIS) released a report on DACA requestors from 2012 to October 2019, finding roughly 110,000 of those had an arrest record. Of 765,166 individuals granted DACA status, 79,398 had a prior arrest, and nearly 25,000 approved applicants were arrested more than once. The litany of mayhem includes thousands of theft, larceny, battery, and assault offenses. The year before, USCIS Director L. Francis Cissna lamented that his agency allowed DACA recipients with "criminal arrests for sexually assaulting a minor, kidnapping, human trafficking, child pornography, or even murder be provided protection from removal."

The real picture of DACA is far from the "best and brightest" trotted out by the media to smile and wave at a sea of eager cameras.

In Seattle, Washington, a DACA recipient allegedly raped a 19-year-old woman. She survived with severe injuries, including a broken jaw and dangling ear. In Houston, Texas, a store owner was murdered by Judas Deluna, a DACA recipient with a history of arrests, including a felony conviction for a terroristic threat made in 2015. In Tucson, Arizona, Border Patrol agents arrested one DACA recipient for human trafficking and another for a sex offense—the latter was wanted for six counts of felony sexual assault on a minor in Maricopa County. The U.S. Customs and Border Patrol database is filled with similar incidents.

DACA also stipulates that beneficiaries enroll in school, graduate from high school, obtain a GED certificate, or receive an honorable discharge from the military. As with the conditions to avoid criminality, thousands fail to meet the educational and civic requirements.

The Obama administration routinely waived high school education or equivalent requirement—just 49 percent of adult DACA recipients had attained a high school education. The Center for Immigration Studies estimates that "perhaps 24 percent of the DACA-eligible population fall into the functionally illiterate category and another 46 percent have only 'basic' English ability." And as for those serving in the military? The current estimate is 900 out of about 800,000.

All of these facts are beyond the scope and, indeed, the interests of pollsters who don't want the public's opinion so much as they want their opinion for the public. The short-term goal is to channel manufactured public support to pressure the administration into renewing legal protections for DACA beneficiaries as their deferral periods end, with the long-term aim of an amnesty deal in the name of humanitarian concerns.But DACA is a program that has been deeply flawed from the start and cannot be called "humanitarian" in the end. A program that does not consider the case for individual applicants but instead protects a myriad of sexual predators, thieves, and murderers does not improve the welfare and happiness of the American people.

In light of the court’s ruling, the administration must stand its ground on DACA. It must not allow manufactured opinion to trump constitutional order, it should refuse to renew legal protection for any DACA beneficiaries as their deferral periods end and reject an amnesty deal going forward.

Pedro L. Gonzalez the assistant editor of American Greatness and a contributor at Chronicles: A Magazine of American Culture.