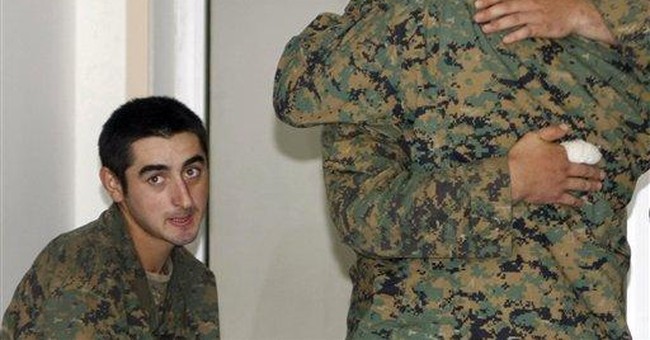 Surveying the wreckage in Georgia where more than 100,000 people are without homes, running water and food, the question remains: what could have been done to divert this disaster? There was a solution promoted by a number of us soon after the fall of the Soviet Union.

Knowing that historically Russia has been nervous about its borders, we foresaw the possibility that not only Georgia but Armenia, Lithuania, Latvia, Estonia and Ukraine would be vulnerable to Russian aggression. A number of us proposed that Russia be made a part of NATO. If Russia were in NATO it would not be in a position to attack its neighbors. But just as important, if its neighbors tried to provoke Russia, NATO would be required to put down any such provocation.

The first to broach that idea was Edward (Ed) Lozansky, President of the American University in Moscow. He discussed the idea with me and my colleague, William S. (Bill) Lind, who thought it was an excellent idea which would solve a myriad of problems.

In Moscow, the director of the interregional group in the old Soviet Parliament, Arkady Murachev, also supported the idea. In due course it was put to Boris Yeltsin, the first freely elected President of Russia. He was open to the idea. So why did it go nowhere? Because cold warriors, who have made careers of fighting the Russians and justified ever increasing defense budgets accordingly, put an end to it.

If Russia were in NATO and bound by its requirements it no longer would be considered our enemy. That was not useful to those who had spent a lifetime in Cold War activities. President George H. W. Bush's advisors were absolutely against this idea. If he had had the foresight to disregard their counsel and push for our idea how different history very probably would be today.

I recall visiting with Bush in the Oval Office after Dr. Robert (Bob) Krieble and I returned from Moscow, where we had found that Mikhail Gorbachev, the political rage at the time over here, was not popular in Russia. Yeltsin was much more popular. I told President Bush that if Gorbachev were replaced his replacement could be someone more to our liking. Bush said he wished he could have believed that, but told me, "I live every day in fear that Gorbachev will be replaced by a Stalinist-type figure." That information was incorrect. And when the idea of admitting Russia to NATO came up the advice Bush received continued to be incorrect.

What now? Clearly, not just Georgia but the Baltic states and Ukraine are worried. They all are concerned because they have democratically elected governments, which Moscow doesn't regard highly. Are we to rush to make Georgia and Ukraine a part of NATO? Could American soldiers be sent to defend Georgia against Russia? In the long run I don't think this would work. Is it now impossible for us to start over? Must Russia be our enemy? If it were, would we be prepared to fight another war? I don't have the answers but it seems to me we must begin to think outside the box. Surely we must have new advisors with new thinking. The alternative is to risk sinking into the abyss of a new war with Russia. Do we need this? No.