The Politics of the Olympics 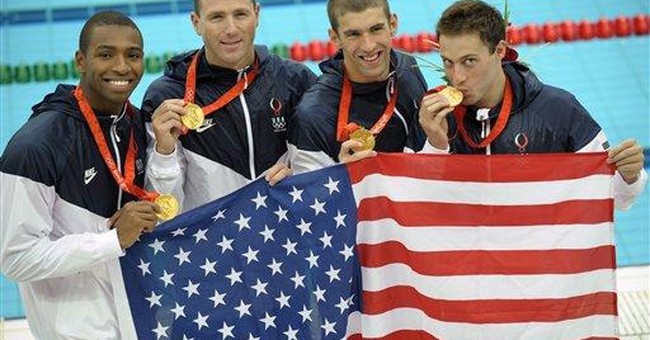 Last week President George W. Bush attended the opening of the Olympics in Beijing, China, the first American President to attend outside his own country. Presumptive GOP nominee Senator John S. McCain (R-AZ) stated that he would not have attended the opening ceremonies if he were President. Presumptive Democratic nominee Senator Barack H. Obama (D-IL) said he and McCain were in agreement on the issue. He would not have attended either.

So what should President Bush have done? Should he be there?

As I see it, the President had three choices. He could have boycotted the Olympics, à la Jimmy Carter in Moscow in 1980. He could have gone and said nothing. Despite the view of the majority of heads of state currently in Beijing for the Games that China's record in Burma and Tibet is unacceptable, they are saying nothing. The most common comment we heard was, "We don't want to mix politics with the Games." The final option was to do what Bush did. He could make a definitive statement on human rights while attending the Olympics.

I think the President did the right thing. Had he boycotted the Olympics, it would have had little effect on the Olympics but it might have been devastating to our athletes. Had he gone to Beijing and said nothing, not only would it have been inconsistent with the President's long record on human rights and freedoms, but the people of Burma and Tibet and the victims of China's one-child policy would have felt abandoned, perhaps even betrayed.

Instead, President Bush went to Thailand and hit China hard on its repression of religion, of freedom of the press, of freedom of assembly and, of course, its forced abortions. True, many people will not have heard anything of Bush's remarks. But in this age of satellites and the Internet, word will get out. When I was active in the former Soviet Union, dissident Russians told me how excited and encouraged they were when President Ronald W. Reagan declared that they were part of an evil empire. It gave them hope and courage to soldier on. The same will be true of the President's tough stance before landing at Beijing. Of course, China's reaction was to be expected. The Chinese Government told Bush not to meddle in its internal affairs. Bush has promised to raise these issues privately when he meets with China's leaders following the opening of the Olympic Games.

At first I was inclined to think that Senators Obama and McCain were correct. But having seen what Bush did, I changed my mind.

Dealing with human rights questions is a tricky matter. The USA can have only limited influence in other nations. Yet if we do not hold China to a higher standard, who will? The real lasting influence we have had in the world has not been nation-building. Our efforts there may have the opposite effect. The times we have had the greatest influence are those times in which we were a moral leader. We provided an excellent example to other governments and provided hope for people suffering under tyranny. It is amazing how moral leadership has such a dramatic effect on other nations, whereas when we try to be the world's policeman we end up creating anger and bitterness.

If Bush had done what he promised in 2000 - that is, no nation building - he would go down in history as perhaps the greatest President since George Washington. As it is, he will be judged on the outcome of two wars, and that outcome is mostly out of his control.